Melbourne Victory's flying start to the season has seen many oddsmakers posting them as the favourite to go back to back in this year's A-League championship race.

But could their bid be derailed in January by call-ups to the national team? 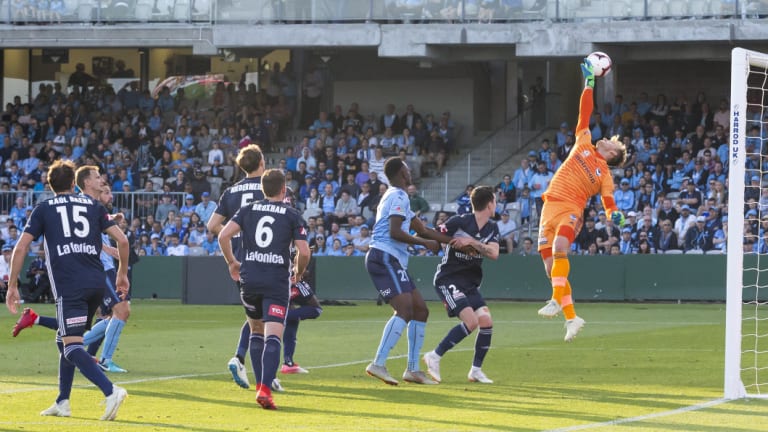 Victory goalkeeper Lawrence Thomas: could he be called up for Australia’s Asian Cup squad?Credit:AAP

He was a non-playing member of Ange Postecoglou's team that won the 2015 Asian Cup when Victory teammate James Troisi scored the extra-time winner in the final.

Thomas Deng, the youthful full-back/centre-half, has been a member of recent Arnold squads and would be very hopeful of taking one of the defensive slots.

Goalkeeper Lawrence Thomas is in the sort of form that has some speculating as to whether he is an outside chance to snare one of the goalkeeping slots contested by overseas-based players such as Maty Ryan from Premier League Brighton, Belgian-based Danny Vukovic and another member of the 2015 Asian Cup-winning squad, Nagoya Grampus shot-stopper Mitchell Langerak (who is another former Victory player).

At 26, Thomas is approaching the peak period for a goalkeeper, and he admits that he would '' love to be'' in contention.

''Of course. The top performing A-League keeper is usually involved. In saying that Maty, 'Vuka', Mitch are all playing at a top, top level. That’s somewhere I want to be eventually," Thomas said.

"I’d love to be there. I believe I can do it, believe I will and I’ll just keep working hard.

''I finished off the end of last year on quite a high note. I’ve been fairly happy with my performances this year.

"At a club like ours we don’t have too much to do in games but when you do you need to be sharp and clean with your actions.

''I’ll keep doing what I’m doing, working hard with Jess van Strattan, our new goalkeeping coach this year and I’ll continue to keep my head down and work.

''It’s a goal to be involved in that set-up. I believe I’m good enough to be there. We’ll just keep going and hopefully that call comes.

''Tommy’s been involved recently. It’s not something I think about too much but if we keep displaying the type of football we did on the weekend, it only helps everyone’s chances.''