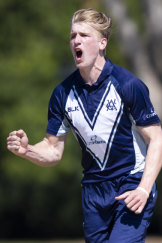 Will Sutherland was fit enough to make 165 and take a wicket in the most recent round of Premier Cricket but Cricket Australia have still deemed him injured and therefore eligible to be replaced in the Melbourne Renegades’ squad.

It was literally a case of where there was a Will there was a way for Sam Harper, who has managed to keep his spot in the Renegades’ squad despite the return of Marcus Harris from Test duties.

Harper was signed by the Renegades as a replacement player on the eve of the season, and there had never been an issue with him keeping his spot until this week, as the Renegades always had someone away either with Australia or the Cricket Australia XI.

But with Harris back from opening the batting against Sri Lanka in Canberra, questions arose as to whether there would still be room for wicketkeeper-batsman Harper, who has played every game this season and is the Renegades’ leading runscorer.

A spot was created though, by CA’s W/BBL technical committee allowing young gun Sutherland to be replaced as he continues his recovery from a back injury.

Sutherland suffered a stress fracture in his back during the JLT Cup domestic one-day tournament in September.

The teenage all-rounder hasn’t bowled pace since, essentially limited to playing as a specialist batsman.

That didn’t however stop the Renegades from picking him for a BBL debut against Perth in December, while Sutherland has since toured Sri Lanka with Australia’s under-19 team, making a century in a game on that tour.

He has also been playing for Prahran, blasting a century against Geelong on the Australia Day weekend. He even bowled five balls of spin in the same game, taking the wicket of Tim Ludeman, the man who coincidentally would have probably regained his spot in the Renegades XI had Harper not been allowed to keep playing.

Big Bash playing conditions state that “a W/BBL Team may apply to the W/BBL technical committee to replace a player who has suffered an injury. 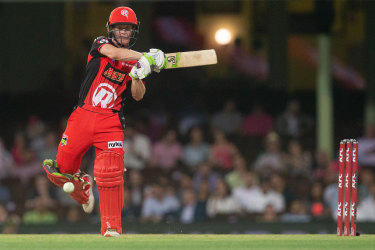 Sam Harper in action for the Renegades.Credit:AAP

“In such circumstances, the W/BBL team must provide the W/BBL technical committee with a signed medical certificate substantiating the injury and certifying that the player will not be fit for the W/BBL Team’s next scheduled match.

Veteran Cameron White is fit to return from a hamstring complaint which kept him from last week’s win over Sydney Thunder but has been unable to win back a place in the Renegades’ squad to confront the Hobart Hurricanes at Blundstone Arena on Thursday night.

The Hurricanes have included Afghanistan international leg-spinner Qais Ahmad, who is set to make his debut for Hobart. Riley Meredith, meanwhile, returns from illness, with James Faulkner (knee) missing as a precaution and Jarrod Freeman dropped.

The Renegades have already qualified for the BBL semi-finals however a win over the ladder-leading Hurricanes will boost Aaron Finch's side's chances of securing a home semi.