THE Mount Rushmore of wrestling is a hotly-debated topic by both WWE fans and superstars.

Big names are thrown around – the likes of The Undertaker, Stone Cold Steve Austin, The Rock, Hulk Hogan, and Bret Hart. But what about the Mount Rushmore of tag teams? 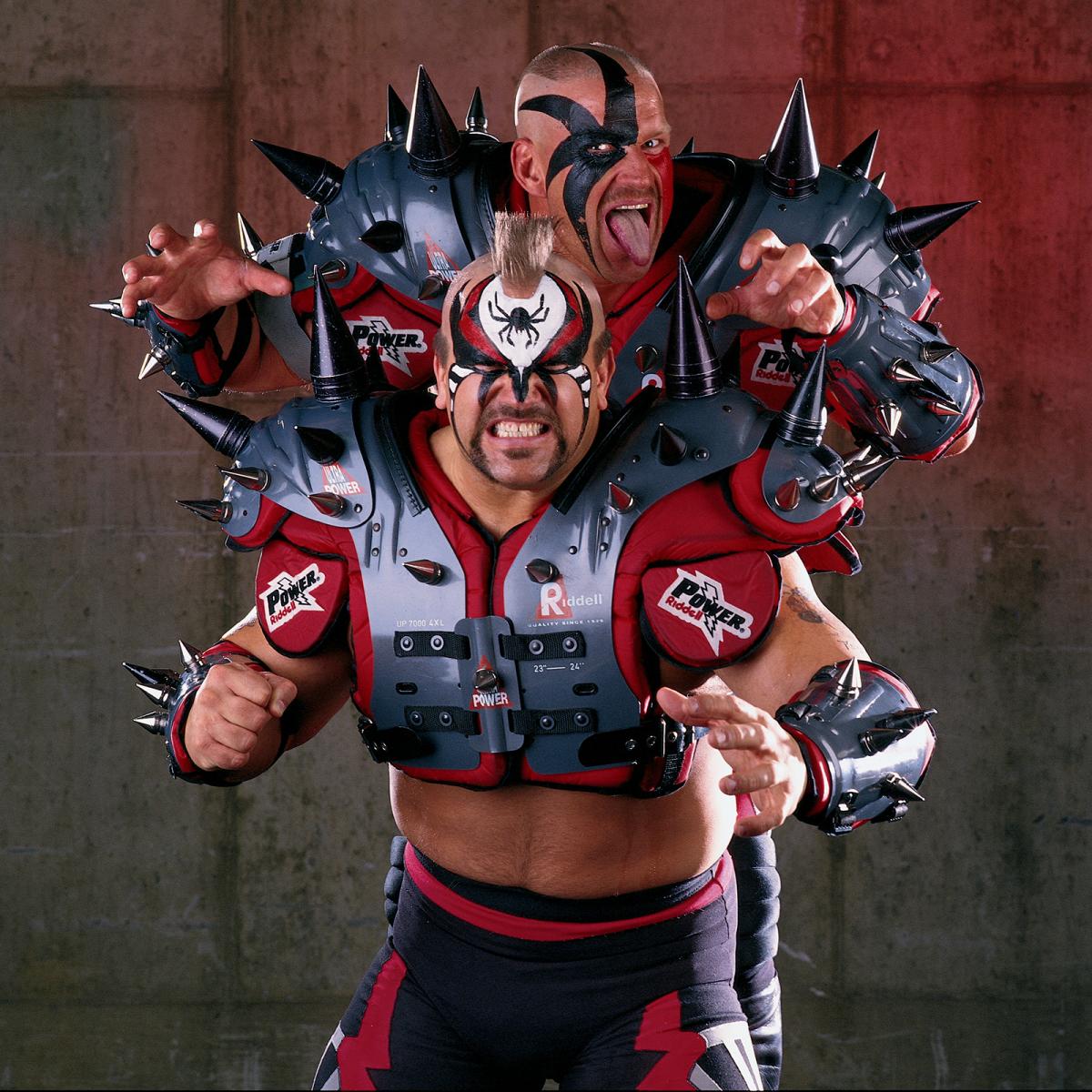 Tag team wrestling is an art in itself. It takes a unique wrestling psychology and skillset – and special bond and chemistry between team members.

To be a tag team GOAT, the team needs to have stood the test of time, influenced the wrestling biz, and possess that special combination of in-ring talent and personality.

Looking back at wrestling history, these are the four teams who deserve a spot on the tag team Mount Rushmore of WWE.

Known as the Legion of Doom in WWE, Hawk and Animal were inarguably the most popular tandem in wrestling history.

With their face paint and spiked shoulder pads, the Road Warriors were a fearsome sight. But their smash-mouth, tear-your-head-off wrestling style was just as terrifying.

Hawk and Animal were main event attractions within a year of their debut and were known for the “Road Warrior pop” – a deafening crowd response wherever they went.

They also came armed with the greatest tag team finisher of all time – the Doomsday Device.

They were a key part of the early 1990s boom in the UK and inspired legends such as Demolition and the Ultimate Warrior.

With their high-risk, daredevil style they invented the TLC – along with the Dudley Boyz and Edge and Christian – and laid the groundwork for every TLC and Money in the Bank match since.

But they did these matches better than anyone, with seamless action and never-before-seen stunts.

The Hardys returned for runs in the mid 2000s and late 2010s – incredible considering the bone-crunching punishment they took early in their career.

They were still having incredible matches together as late as 2017 (see their gripping feud against The Bar).

The popularity and success of the team also lead to singles stardom. Matt is recognised as one of the great creative minds in wrestling and Jeff is a former WWE Champion. 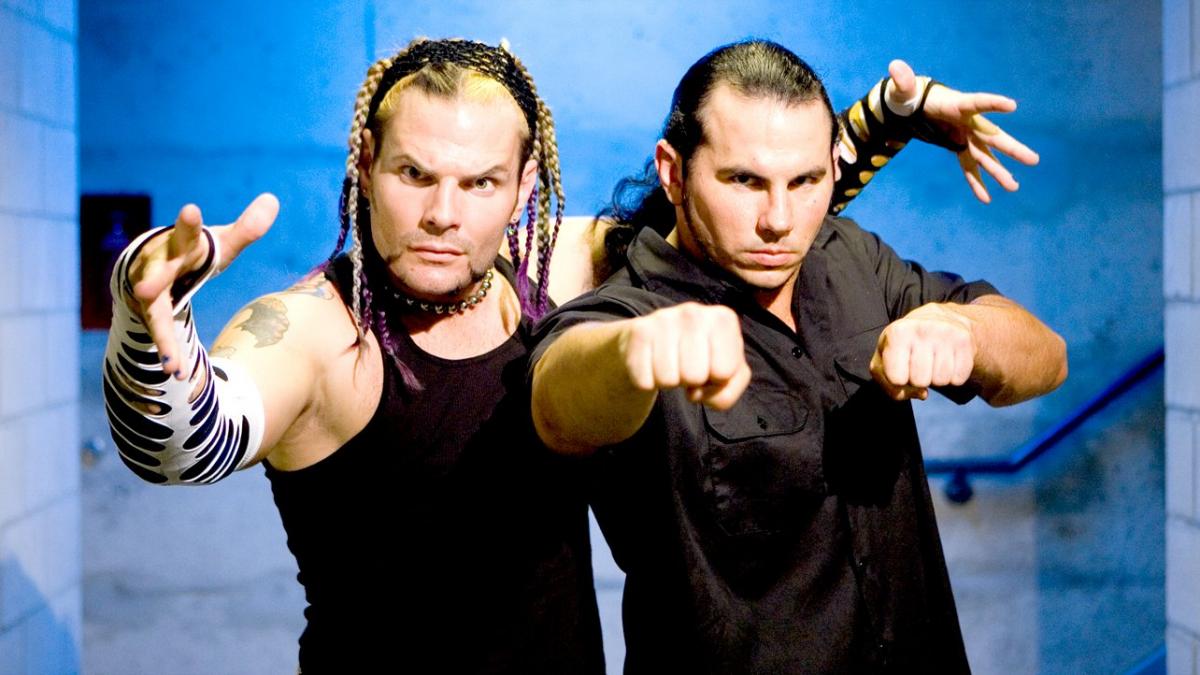 After more than five years together, the three-man team is still one of the premier acts in WWE. Tag teams rarely last that long before splitting or being turned against each other.

The key to their success is the distinct personalities of the three members – Kofi Kingston, Big E and Xavier Woods – and their real-life chemistry.

They were thrown together at first and became a heel team. But they were so entertaining that fans turned them babyface.

Between 2015 and 2016 they broke Demolition’s record to become the longest ever reigning WWE Champions. Now the team are ten-time champs.

They’ve had killer matches against The Usos, The Shield, The Bar, and The Revival.

Kofi Kingston winning the WWE Championship – while still part of the team – was an unprecedented move and a testament to the success and popularity of The New Day.

Technically The New Day is now a two-man team, with Big E on SmackDown and separated from reigning Raw tag champs Kofi and Xavier. But they're spiritually still aligned. 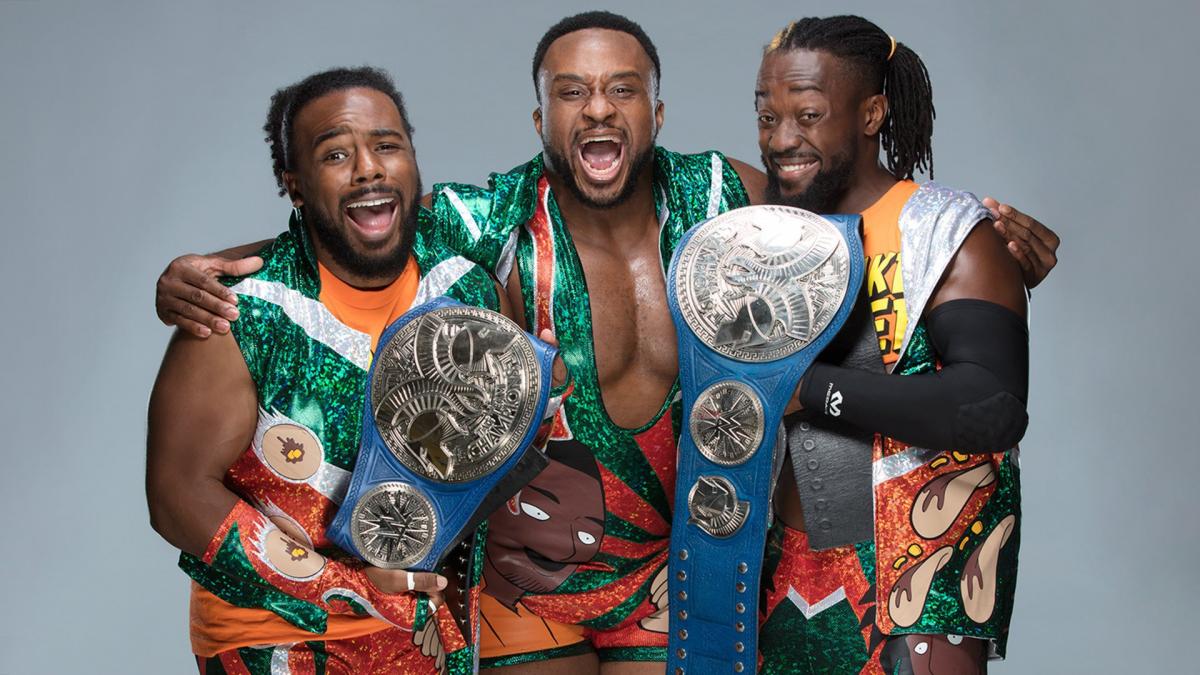 The Bulldogs – Dynamite Kid and Davey Boy Smith – joined WWE in the mid-1980s. They held the tag team titles and performed at three WrestleManias together.

Along with Bret Hart, Randy Savage, and Ricky Steamboat, they were responsible for bringing a “work rate” style of wrestling to WWE.

Dynamite Kid's style was especially groundbreaking – arguably the most influential wrestler of his generation and one of the godfathers of the modern style.

Matches against teams such as the Hart Foundation or Fabulous Rougeaus were often leagues ahead of the other lumbering action of WWE cards at the time.

They also wrestled in Japan and the Harts' Stampede territory in Canada.

Davey Boy – an excellent wrestler in his own right – returned as a singles wrestler and became the biggest wrestling star Britain has ever produced. 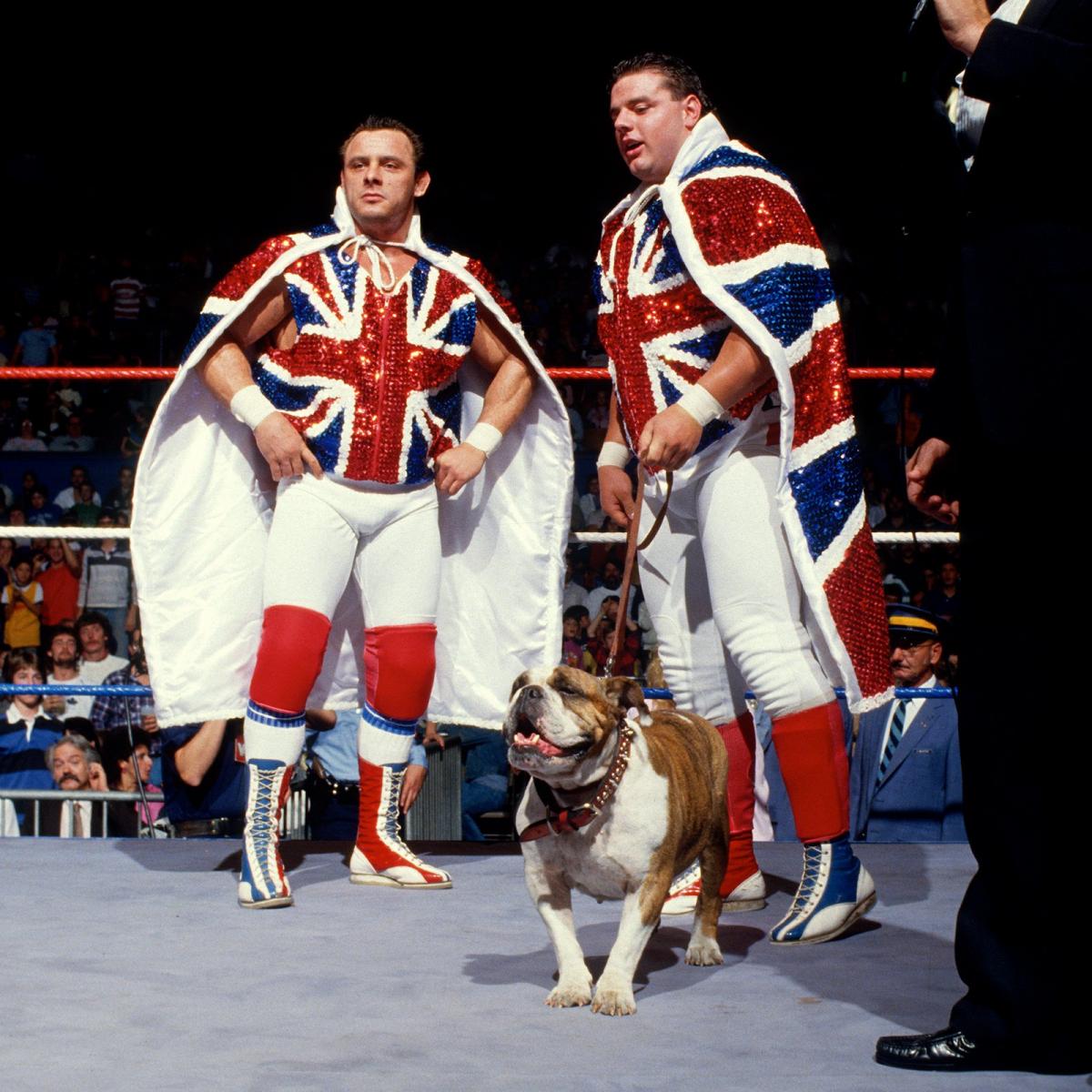 Here are some tag teams also worthy of consideration:

Two-time champs Bret Hart and Jim Neidhart were a perfect combo of a technical wrestler and powerhouse. They had classic matches against the Bulldogs, the Brain Busters, and Rockers.

The Harts finest moment was winning the titles against Demolition in a sizzling 2-out-of-3-falls match at SummerSlam 1990. 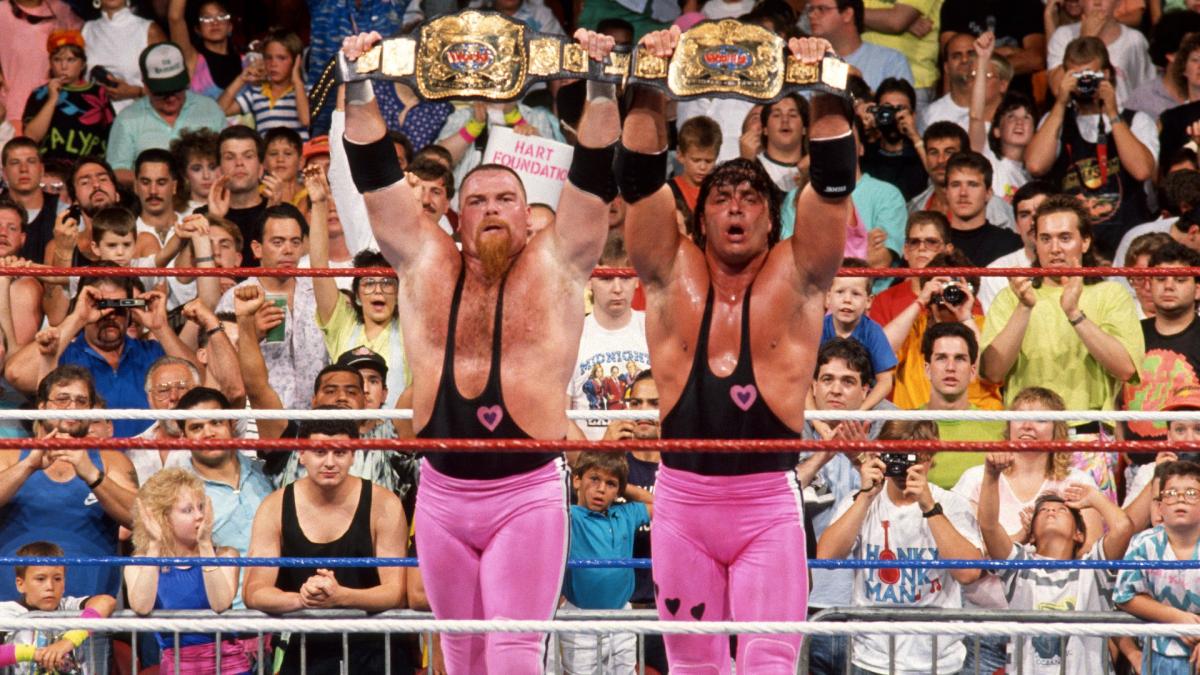 Their break-up – in which Michaels smashed Jannetty through a pane of glass – is similarly influential. It's been replicated many times in the years since.

Road Dogg and Billy Gunn are sometimes overlooked for their contributions to tag team history. It’s easy to forget how important the six-time champs were in kicking-off the Attitude Era.

As heels in late 1997, they were the freshest act in WWE. By early 1999 – at the peak of their babyface run in DX – they were immensely popular. 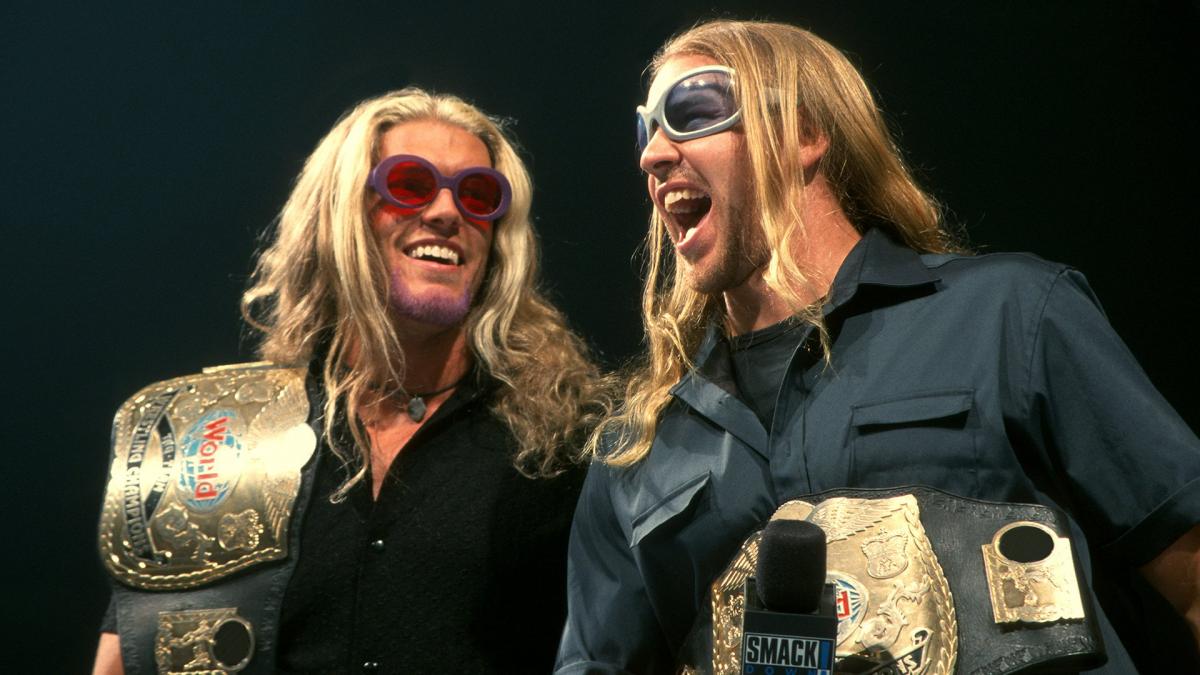 These multi-time tag champs were goofball heels on the mic but backed it up with first-class performances in the ring. Also instrumental in creating TLC.

There's a reason they usually won big matches against the Hardys and Dudleys – a perfect example of a team that's designed to turn its members into major singles stars.

Sheamus and Cesaro were rivals who got lumped together following a best-of-seven series. But they had unexpected chemistry as a team and became real-life best pals.

The team was relied upon to have the best matches on TV week-in, week-out and won multiple titles together. Great as babyfaces, even better as heels.