HBO’s newest Rachel Lee Goldenberg-directed film Unpregnant isn’t so much a movie about abortion as it is a beautiful ode to the importance of female friendship.

Coming-of-age, high school-set movies usually focus on the themes we’ve accepted to define onscreen adolescence—first love, sex, drama, and cliques. But with Unpregnant, main characters Veronica Clarke (Haley Lu Richardson) and Bailey Butler (Barbie Ferriera) are two best friends who are looking out for themselves in a world that too often trivializes the concerns of young women.

When Veronica finds herself pregnant by her heavily suburban, sculpted high school boyfriend, she immediately knows she isn’t ready to bring a child into the world, let alone be tied down to a boy she doesn’t really love. Embarrassed by her circumstance, Veronica seeks the help of her former best friend, Bailey—a hilarious social outsider—to journey on a road trip to New Mexico where she can safely obtain an abortion without parental permission. It’s during their miles-long trek that the two young women reconnect, reflect on the dissolution of their friendship, and bond over the very real, and often very unfair societal expectations of young womanhood.

Below, we spoke with Ferreira about why Unpregnant is a film that teenaged girls—and maybe even some parents—need now more than ever.

What attracted you to this script and why did you feel like this was an important story to tell?

When I was reading it, I was really intrigued at the fact that it was a buddy comedy road trip movie about two girls who are best friends and all of these kind of really relatable teen angst kind of things. And also abortion, which is also another relatable topic for a lot of people. I loved the way that they dealt with it, where it was normalized. It showed a different perspective of how one makes that sort of decision. A lot of movies sometimes can be like, the person on the fence, which does happen, and can be another facet of the story.

But I really liked that Veronica had a conviction, that she made a decision and that was unwavering throughout the whole movie. And it was the access to the healthcare that was really the journey, rather than her emotional journey to making a decision. She already knew what she wanted and it was really about these two girls trying to access health care, which was really cool in my opinion.

Your character, Bailey, is so funny and so relatable and I see so many of my friends in her. Were there any parts of yourself that you saw in Bailey?

I related to Bailey in a lot of ways. I felt really isolated as a teenager and I also had a lot of falling outs with really important people in my life and that happens with a lot of people. You outgrow friends, or it just doesn’t work out, or people go different ways and different paths. And there’s this whole lie that in high school, you hang out with people who are more like you. I think Bailey kind of sees past it, and she has a greater understanding of what it means to be different and what it means to have different interests and see the world in a different way. And I think that really, I related to that, especially when I was high school. I feel like I also outwardly wanted to be different. I would dress differently just like Bailey and kind of explore my style regardless of what people around me were doing. 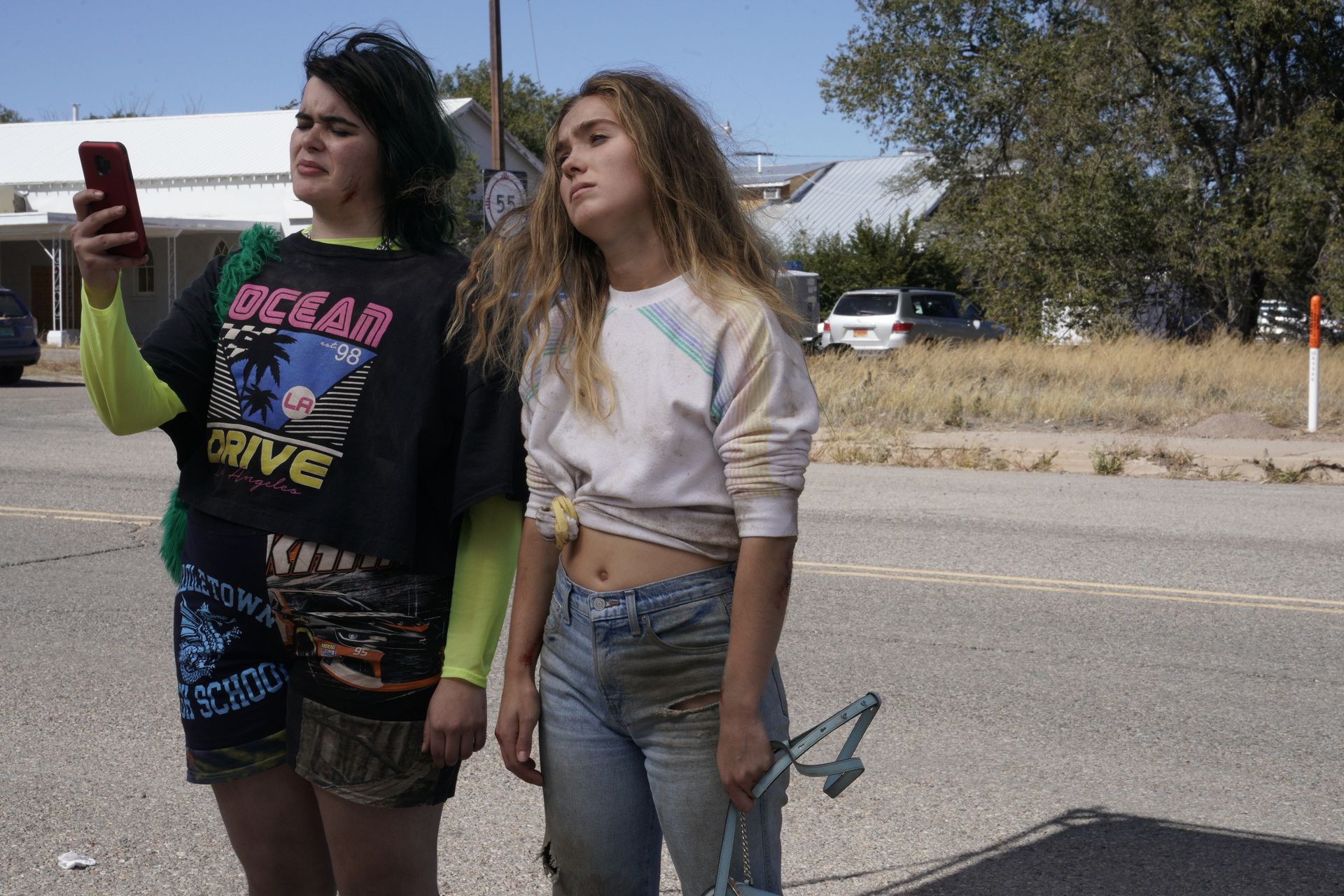 This is a story that people are going to feel strongly about. Some will be very here for it, while there will also be some people who are very against it. Do you feel like this story is something that you could have used when you were a teenager?

One hundred percent. I think what I really love about Unpregnant is it’s also very educational. There’s a way where it entertains you and educates you at the same time. It walks you through processes. It walks you through kind of the hardships of someone, say, in Missouri, who wants to get an abortion, but doesn’t want to tell their parents. So then they have to travel over state lines.

The film almost takes away that taboo and shame that a lot of Americans have in particular with talking about sex and talking about abortion and talking about birth control and reproductive rights and all these things where we kind of just don’t talk about it, and we don’t tell our kids about it at all. Or having sex education in school because that’s still a controversy as well. Who knows why, but I think we’re in such a culture of we don’t talk about anything that makes us uncomfortable and it’s doing the opposite of making it better, it’s actually creating more tension and it’s creating more falsehoods on what it actually is like, what an abortion actually is, and how hard it is to access a safe and legal abortion, which should be a human right.

It doesn’t have to always be something that’s filled with guilt and shame and regret or anything like that. It really looks different on different people and everyone has a different experience with it. 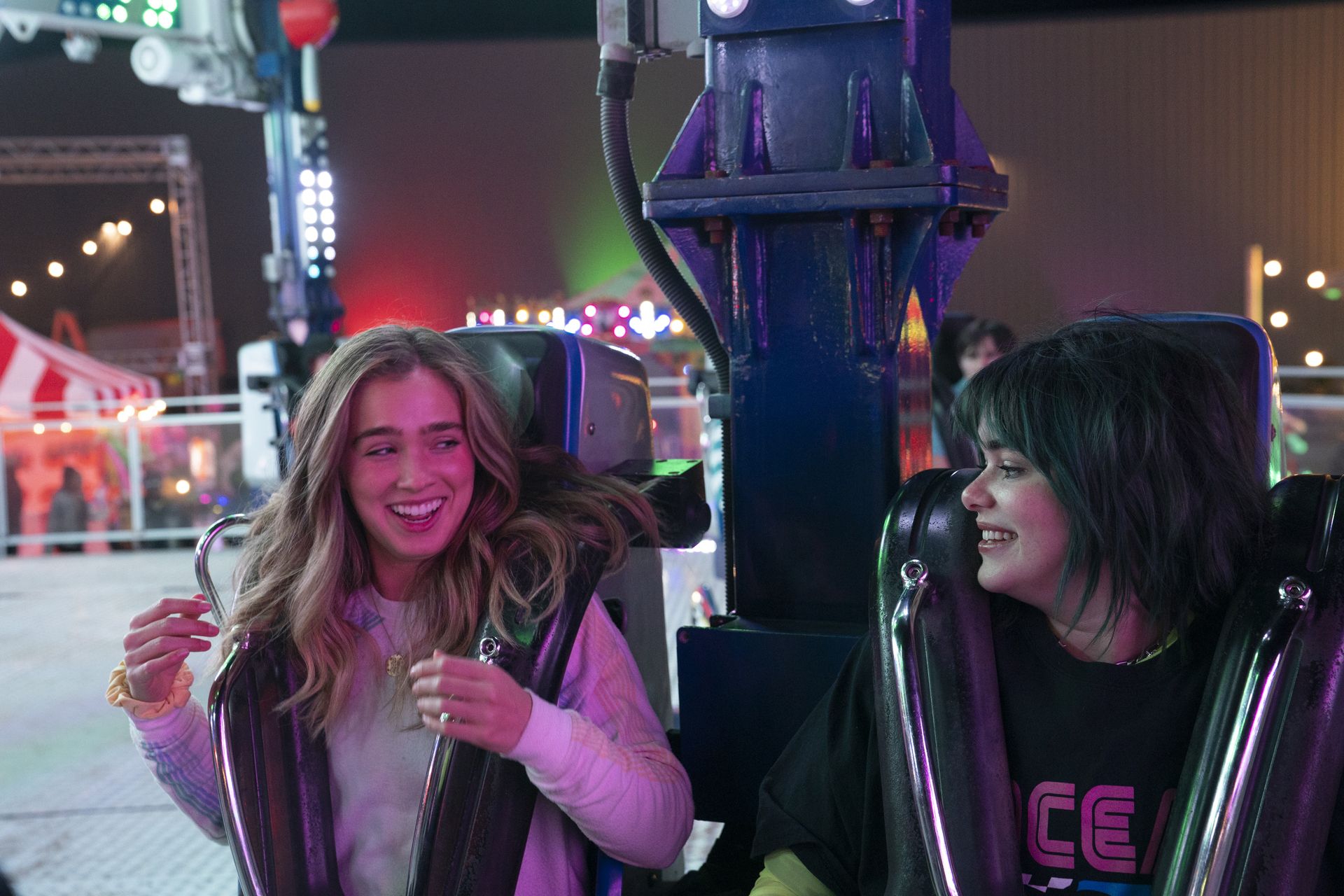 I love that you mentioned the word “taboo” because it’s definitely the first description I think of when it comes to the topic of abortion. Do you think our society will get to a point where it no longer is taboo, where it’s something that we can talk about without it always being a debate?

I think that we are probably far away from that. I think abortion is one of those things that, it’s so highly political and highly divisive because there’s two very different ways of looking at it. Of course I don’t necessarily relate to what people who are against it think and what they say, but I think it’s hard to create a conversation when people don’t have the correct information as well. I hope that we as a country can have conversations again without it being something that is just so hard and divisive. If we all could just talk about abortion together, I think there would be a lot of information that would be given, correct information, and maybe the perspectives would be different.

I think it’s something that we’re working towards and it’s going up and down. It always goes two steps forward, one step back. Hopefully one day it’ll be something that we all agree is a human right. It doesn’t mean you have to get an abortion. It means people should have access to an abortion if they so choose.

Another core theme of the movie is friendship and especially female friendship. I love that it showcased that even when you’re a teenager, friendships can be really hard, really complex, and really complicated. How would you describe the friendship between Veronica and Bailey?

It’s one of those situations where they both outgrew each other and went into two separate paths. Bailey had a really rough time growing up with her parents and her family situation, and that led her to act out in different ways that Veronica didn’t really understand. You could tell how much they love and care about each other and how awkward it is because as teenagers, we don’t have the tools to communicate. I mean, even as adults, we don’t have tools to communicate. Let’s be honest here.

Much less like hormonal teens who are really scared of being embarrassed or being judged by others, they want to fit in and have all this pressure on their shoulders about their future. I think having these two polar opposites balance each other out in this road trip really shows how much they really care about each other and how they really never talked about it. It’s this kind of unsolved and unprocessed situation, which was really eating at Bailey and definitely Veronica as well.

Your character has a mini love interest as well and it was showcased so effortlessly, with no drama. It was simply like, here it is! I feel like that’s something we’re starting to see more in shows and films that are geared towards a younger audience—the organic existence of queer teens and relationships. How did you feel when you saw that was a part of the storyline?

I was really excited because I think it was very sweet and I love the first kiss moment. It just made Bailey, to me, feel even more well-rounded and you don’t really see her ever talk about love or partners or who she had a crush on, et cetera. It also stops her from being her quick-witted self, and I like seeing that in Bailey where she is flustered and isn’t as quick and know-it-all as she usually is. It just shows her as a more fully fleshed-out human, which I really love. It makes you kind of root for her and understand her a little bit more. And you get to see a little awkwardness, which is always so cute.

What do you want people to take away from this film, whether it’s young women, young men, whoever, young, old? I feel like everyone has a little something they can learn from it.

It’s one of those movies where it ends, you feel good and you don’t feel heavy—which I love those movies as well, and definitely with Euphoria you tend to feel a little heavy at the end of it all. But I also love feeling really good and experiencing some warmth and love from a movie too. I hope that the film helps people start conversations and maybe learn something. Maybe they thought abortions were a certain way, and then they watch and they’re like, “Oh, I had no idea that this is how it goes.” Or “I had no idea that people have to cross state lines for access to healthcare” and all those things. I just hope that people enjoy it and they talk about it and have a conversation about reproductive rights and friendship—all the complicated but also really important stuff in the world.

This interview has been edited and condensed for clarity.