"It's fun, fun, too much fun!" exclaims Olivia Colman. Playing 18th-century monarch Queen Anne in The Favourite, a slice of history inflated, twisted and redecorated by the Greek director Yorgos Lanthimos, sounds like it must have been a riot. For three weeks, the assembled cast rehearsed by playing theatre games: knotting themselves together like a giant pretzel and saying each other's lines, for example. Then the scripted wildness began: races across the palace floor with lobsters, playtime with 17 rabbits standing in for Anne's dead children and the most bizarre dance sequence ever seen on film.

Queen Anne, at least in the version Lanthimos has whipped up, was a tempestuous, spoilt-rotten woman whose endless maternal bereavement was alleviated by eating, sex on command and playing off against each other those craving her favours. "She sort of goes through the gamut of every emotion, so it's a gift to play," Colman enthuses. "Yorgos is so encouraging. He wants you to go as far as possible! 'No, do more!' Or 'She's beside herself!'. But it is written there in the script, you know. 'Anne is standing on a window sill, screaming'. OK, great!" 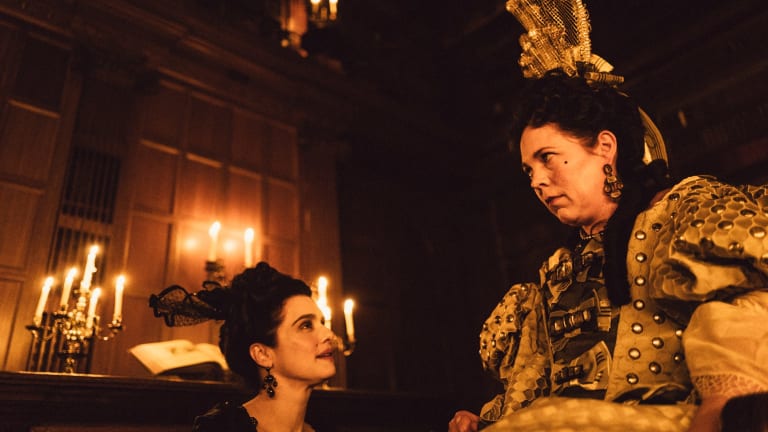 Rachel Weisz, left, and Olivia Colman in The Favourite.Credit:Yorgos Lanthimos

The Favourite was launched at the Venice Film Festival in September, where it very soon lived up to its name; although it was pipped by Alfonso Cuaron's Roma for the Golden Lion, Olivia Colman was named best actress, Lanthimos won a special jury prize and the film went on to win acclaim in Toronto, multiple awards at other festivals and five Golden Globe nominations earlier this month. Colman is nominated for best actress in a musical or comedy; Rachel Weisz and Emma Stone, who are the ladies-in-waiting competing to be the chosen concubine of the film's title, are both nominated as supporting actress. Oscar nominations will certainly follow.

The structure of these awards requires splitting the actresses between categories. That was frustrating, Lanthimos told Indiewire, given that the film is about a close-fought power play between three contenders. "From day one when we started writing the script, I felt that this was going to be a film about these three women and they were going to be equal, and in different times within the film each one would rise up above the others or take the lead," he said. "And I think that's how we did it." 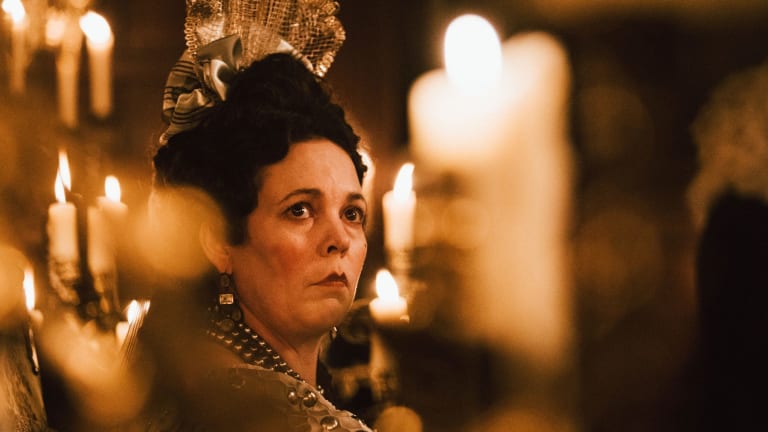 Lanthimos came to the world's attention with Dogtooth (2009), a dystopian fable about a family of teenage children sequestered in the luxe family home by their father, who is so determined to render them incapable of negotiating the outside world that he teaches them the wrong meanings for common words. It was his second film and the first to be identified with the Greek "weird wave", defined by a freewheeling wackiness that flew in the face of the country's economic crisis. Lanthimos went on to make The Lobster (2015) and The Killing of a Sacred Deer (2017). Both these films were in English, but they still felt as if they hailed from another universe.

Colman was in The Lobster, playing the stern administrator of a last-stop dating hotel where single people must pair up within a given time or transform into an animal. Colin Farrell chooses to become a lobster. "An excellent choice!" Colman replies crisply, a classic Lanthimos line: what would be excellent about life as a lobster?

"Oh my God, that film was so much fun too," she recalls. "But that scene took an awful lot of takes. More! Less! Tweaking. It's down to Yorgos' taste."

No one could reasonably have expected that the maestro of weird would make a period costume drama, but it turns out he has been working on The Favourite for nine years. When they saw Dogtooth, producers Ceci Dempsey and Ed Guiney​ asked Lanthimos to consider directing an existing script by Deborah Davis about Anne's reign. They felt there was some common ground. In both stories, Guiney told the Observer in London, "you put a small group of people in a hothouse situation and watch them react". 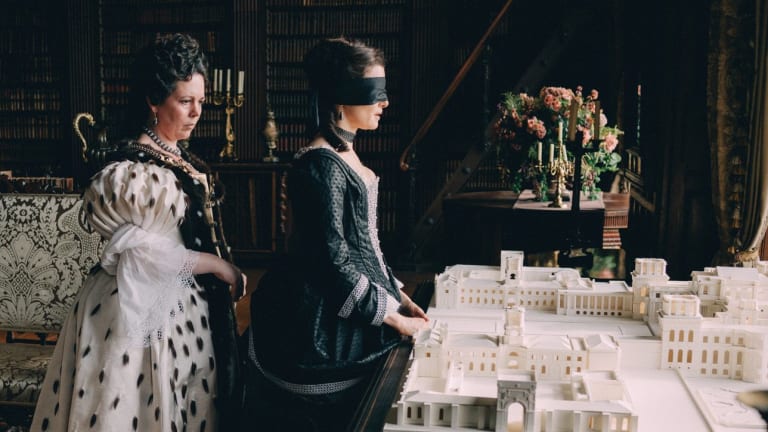 Olivia Colman and Rachel Weisz at play in The Favourite.Credit:Atsushi Nishijima

Anne was queen between 1702 and 1714: crucial years in British history during which she presided over the political union of Scotland and England and a protracted British intervention – thanks to a complex web of alliances – in the War of the Spanish Succession. The original script focused on political detail. That didn't interest Lanthimos much. It was her relationships with other women angling for influence that intrigued him.

For the purposes of this story, there were two. Sarah Churchill, the formidably clever Duchess of Marlborough, was for years the power behind the throne. Surviving letters strongly suggest they were lovers; Colman says she believes Lady Churchill was the love of Anne's life. Rachel Weisz plays her with such aplomb that one Dutch journalist, knowing nothing of English history, said that for the first half hour he thought Churchill was the queen. 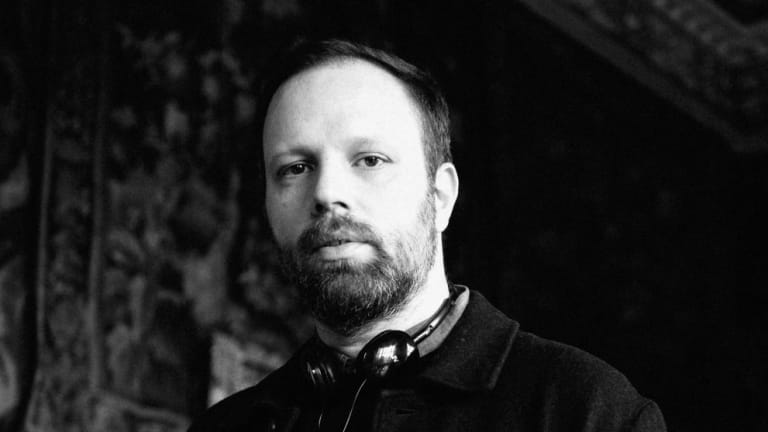 Director Yorgos Lanthimos was interested in the power play between his three female leads. Credit:Emma Stone

The duchess was eventually displaced, however, by her cousin Abigail Hill, whose father had squandered her family's fortune and left her entirely reliant on her wits, her aristocratic bearing and, as it turned out, her sexual flexibility. Hill is portrayed by Emma Stone, who brings a certain brazen American edge to the role but whose English accent even Colman says is perfect.

We see so many films about men wielding power, Lanthimos says. It's just boring. A film about three scheming women, in which men barely featured, was the sort of unlikely sell that appealed to him. "Also, it felt a very intimate story where you could focus on characters but then, through that, speak about how a few human beings affect the fate of a whole world, of a nation, of a war – which is not about women any more, it's about people in power. That gave it another layer that made it interesting to me." 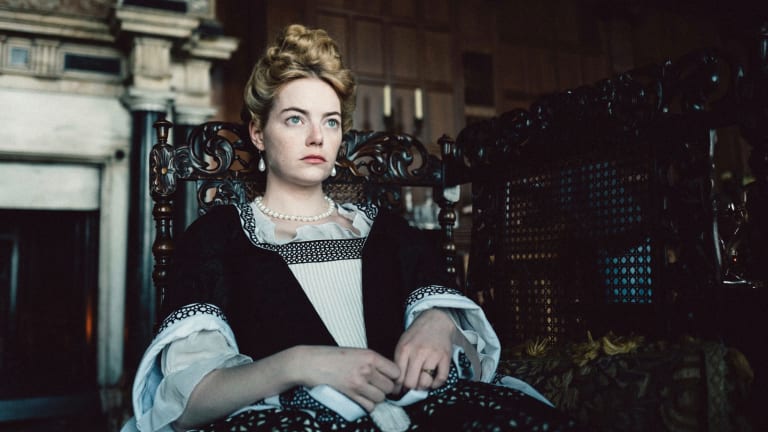 He was also keen to see how he would fare with that most English of genres, the costume drama. "To see if I could make something that would feel mine, the same way that I've made my other films. And to see if what I do would take a different shape within this genre."

With Davis, he restructured the script to simplify the politics; he then worked with Australian scriptwriter Tony McNamara to weave the real events into a typically Lanthimosian concoction of wild happenings, poetic flourishes and flagrant anachronisms. Certainly, nobody in 1702 talked about "career suicide" or wore a laser-cut plastic dress. He didn't care. 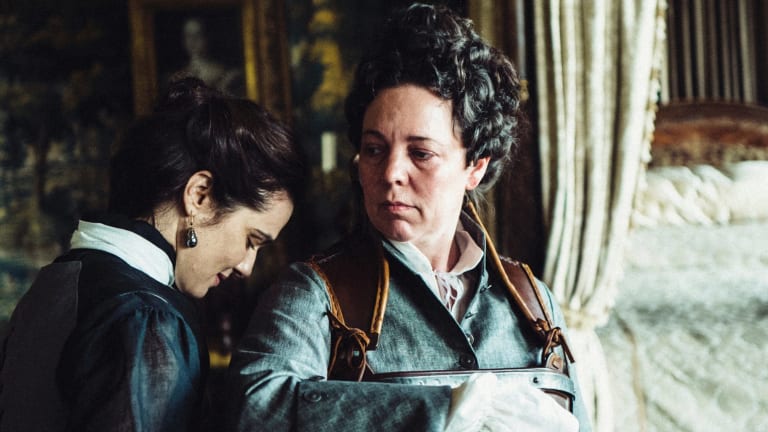 Rachel Weisz and Olivia Coleman play a queen and her consort in The Favourite. Credit:Yorgos Lanthimos

Emma Stone was the only American in the palace. Her agent approached Lanthimos in Cannes and told him she wanted to try for a role in his next film. "And he said 'Oh, OK," she says, imitating his slightly honking delivery. "'I didn't think it could be an American, but OK."' She still had to audition, which is not something Oscar-winning Hollywood stars expect to do. And although she says she was welcomed to the English fold, especially by Colman – "Olivia is the warmest person – she kind of crashes through the ice, though there is no ice to begin with" – she struggled in private to keep up with actors for whom riding horses, squeezing into corsets and, of course, speaking the Queen's English was par for the thespian course.

"The accent alone was interesting," Stone says. "I think it was psychologically helpful, being on these locations and the only American there. It helped plunge me into that country in a different way. I didn't feel like an outcast, because it was the nicest cast and crew and they were very helpful to me, but I did feel I needed to be conscious of how I sounded while also needing to let go of that, which reminded me of Abigail and how she would have to observe and shapeshift." 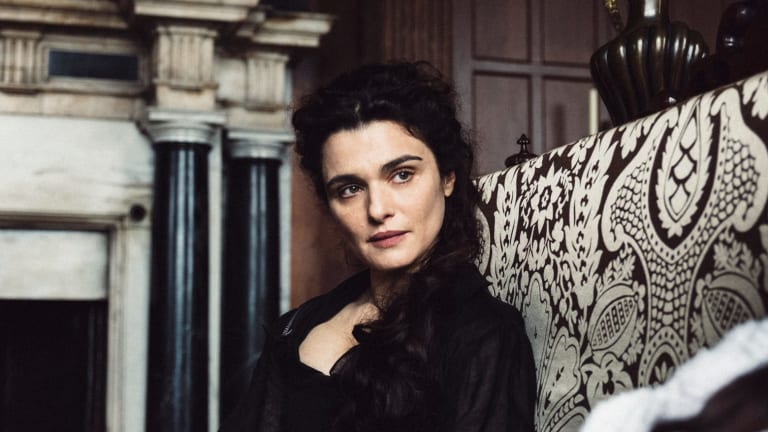 The corset was the worst of it. "The first month, before your organs adjust and stay in place, you pull it all in and it all moves. Oh God, it was disgusting. I would just smell menthol and imagine I was in an open field, because I just could not breathe."

Stone brings plenty of sting and zing to Abigail, but the awards system has it oddly right: The Favourite belongs to Colman's grotesque, pathetic but ultimately resilient Queen Anne. After 20 years as a stalwart in supporting roles, Colman seems to be making something of a specialty of playing queens; straight after shooting The Favourite, she took over from Claire Foy as the current queen in The Crown. Elizabeth's implacable restraint is much harder to play, she says, than Anne's excesses.

"One of the things I find amazing is that she has trained herself to be, or is expected to be, everybody's rock," she says of the current British monarch. "She visits hospitals after terrible things have happened and has to be strong for everybody. And I find that very difficult. The thing I can't do is keep a lid on stuff, you know, emotions. And I must!" Having never thought of herself as a monarchist, she says working on The Crown has given her a new admiration for the Queen's stoicism and commitment.

"I would hate it. I would rather put poo in my eye than be a queen." She darts an apologetic look across the interview table at a European journalist. "Sorry, that's not very helpful, is it? Not in another language." Far better to be a working actor with no pretensions to glamour – "I'm a jeans and jumper-with-something-spilled-on-it person" – who can revel in the "joy, misery, screaming, sulking, everything" of a long-ago ruler with a severely disordered personality. She also felt a sympathy with Anne's monstrousness: anyone who lives with the loss of 17 children, she says, can behave how she likes.

Living among the splendour of monarchy also left her cold. "I always find it really weird when I say 'oh, could I have a cup of tea please?' and they say 'you can have anything, you're the queen'," she says. "No, I'm not actually the queen. I'm an actress and I've been given a job." The sets may be opulent, the locations regal – The Favourite was shot in Hatfield House, a stately home in Hertfordshire – but it's not real. "If you turn any of the furniture over, it's got a sticker on it saying where it's got to go back to. And the costume: I try not to sit down, because they crease. I'm very aware I've got wig pins. It's pretend."

And it's a hoot. Even the European countries with bicycle-riding monarchies, says the Dutch journalist, draw the line at laughing at them.

"I think Britain has always been quite proud of the fact that we laugh at ourselves, even if we are laughing here at a small proportion of ourselves, which might be a bit cruel," says Colman brightly. "Also, this was a Greek man who was laughing. It is refreshing, actually, that he is coming in without this sort of drip-fed passion for period drama and monarchy we all have. He is telling a story. And it doesn't really matter."