In the newest episode of Brooklyn Nine-Nine, JK Simmons appears as a new guest star on the show. While the last episode had the characters split up into different plots, “Dillman” has all of the main characters working together, and against each other, to try and solve a case.

[Spoiler Alert: This article contains spoilers for the most recent episode of Brooklyn Nine-Nine.] 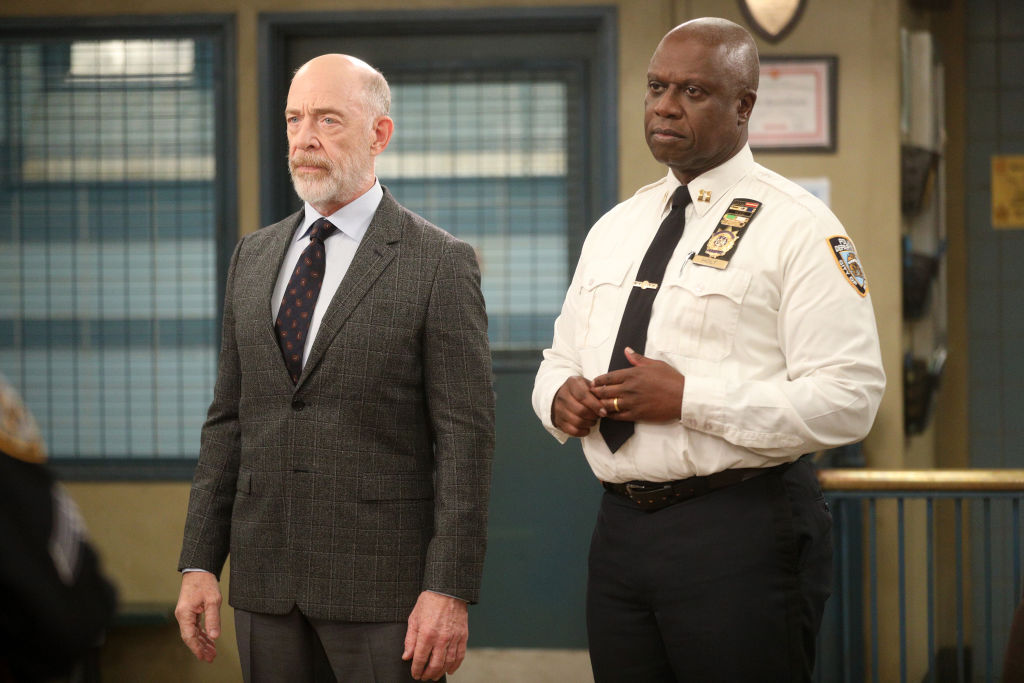 A prank goes awry in the ‘Brooklyn Nine-Nine’ episode

The episode opens with Captain Holt and Jake discussing Holt’s new task force. Jake gives Holt his resume, and campaigns for why he should be selected. As he talks, an explosion goes off in the precinct, shattering the glass windows in the building.

Scully appears with red glitter all over his face, and Jake deduces someone was trying to play a prank on him by setting the glitter bomb on his desk. Unfortunately, the glitter bomb tampered with evidence that was on Jake’s desk, hindering the investigation.

Holt feels the situation needs the perspective of an outside detective, and he calls his friend Detective Dillman, played by Simmons. Dillman is a cop in San Francisco and was recently in town and set to have lunch with Holt the next day. Like Holt, he has a very stoic attitude and dry sense of humor, making him the perfect foe for Jake.

Dillman and Jake compete with each other

Throughout the entire episode, Jake finds himself at odds with Dillman. Holt admires Dillman’s work, but Jake wants to beat him to prove he belongs on the new task force. It’s then revealed Holt already offered the job to Charles.

Charles tells Jake he might not take the job, claiming he was already planning to cut down on hours to spend more time with his son Nikolaj. Dillman then uses Jake’s obsessiveness with the task force to pin the prank gone wrong on him.

Jake is suspended, but not before he has an epiphany. He returns to the precinct and blames Dillman for the prank. It turns out, Dillman was fired from his job in San Francisco and he has a part-time job in Albany. He was planning to use his lunch with Holt as a way to secure a new job on the task force.

Charles is one step ahead in ‘Brooklyn Nine-Nine’

It turns out Dillman and Jake were both wrong. While Dillman did lie about his intentions and his job, he was not the culprit like Jake suspected. It’s revealed the precinct’s own Officer Howard Booth was responsible for the explosion, and Charles was the one who figured it out.

Just spending our day thinking about these two. #Brooklyn99

Booth placed the glitter bomb on Jake’s desk with the evidence and purposely set it off to help his corrupt brother-in-law. After the revelation, Jake encourages Charles to take the task force job. While everyone else in the precinct was caught up in the game of it all, Charles actually dedicated himself to building a case. It’s a reminder that while Jake and Rosa are usually seen as the more competent detectives over Charles, he’s still very skilled at his job and deserves recognition for that.