In a sketch that’s already earned its lofty cult comedy status, Netflix’s “I Think You Should Leave with Tim Robinson” puts on a lavish, televised, and very intense baby beauty pageant. As the crowd shouts death threats at toddler dressed in biker gear and judges are outed for accepting sexual favors from contestants’ parents, Sam Richardson presides over the magical chaos in a sparkling silver tuxedo — the prototypical pageant host of The 112th Annual Baby of the Year Competition.

He hits all the notes in the opening song, crooning “Look at their rolls, look at their folds!” before hitting the high chords in “Which ones can daaaance?” He embodies the audience by rolling his eyes when a judge interrupts the competition for a personal statement. He supports the babies, withstands the bedlam, and hits just the right tone for a sketch that’s purposefully all over the map.

Granted, this is a bit. Richardson isn’t on live television; he’s playing a character. But does he fit that character to a “t” — and he did yet again when accompanying Conan O’Brien on a trip to Ghana in the late-night host’s latest international special that aired Thursday night on TBS, “Conan in Ghana.”

The expedition marked a coming home for Richardson. His mother is Ghanaian, and he grew up making regular trips to the West African nation to see family. O’Brien was invited as part of The Year of the Return, a yearlong commemoration designating the 400 years since the first enslaved Africans arrived in Jamestown, Virginia. The country’s marketing campaign has targeted African Americans and diaspora in order to help those returning reconnect with their roots, ancestry, and culture.

Near the end of the hourlong special, Richardson gets choked up talking to a local woman about the efforts, noting how it’s especially healing and rewarding for anyone who can visit Ghana and see records of their relatives who lived there, but it’s much more difficult for those people who had such ties ripped away from them. It’s a human moment in a heartfelt and humorous episode, and one that feels earned by Richardson’s genuine interest and envelopment in the locals and their customs.

That’s no easy connection to make with an audience, especially in such a small window of time. Richardson is probably only featured in about half the runtime of the 43-minute special, but his impact carries through. He may be introduced as Conan’s guest, but he acts like a host to the viewer and even O’Brien. 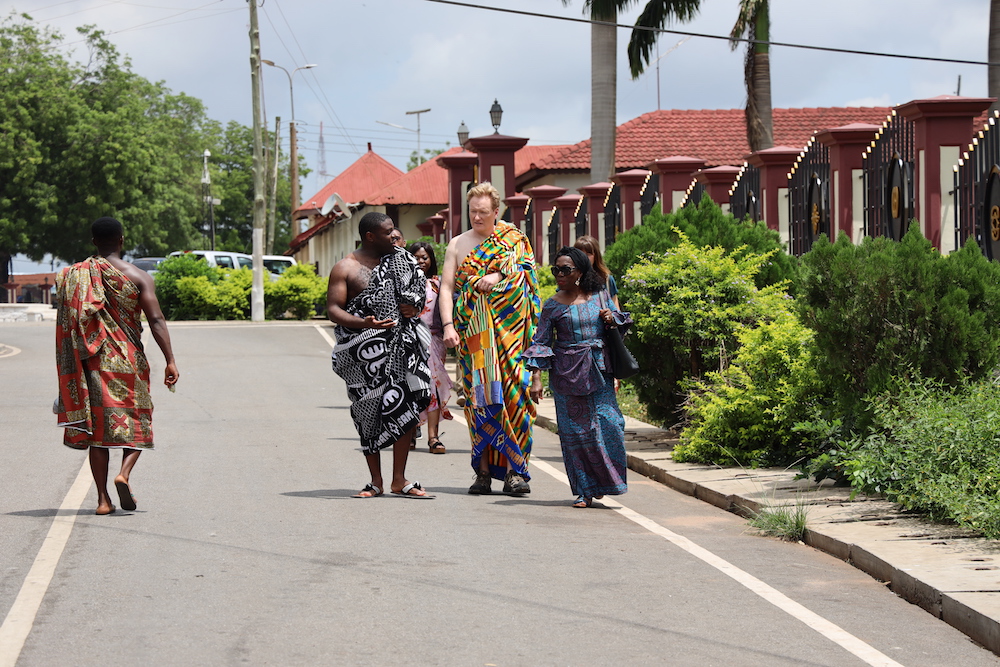 Sam Richardson and Conan O’Brien in “Conan in Ghana”

And a good one at that. Richardson’s sincerity is moving in those final, more serious moments, but he’s excited to engage with every stop along O’Brien’s tour. When they stop in a market for some impromptu shopping, Conan starts in on a bit as the spokesperson for a chocolate candy called Perk Choco. Picking up on his partner’s pale complexion, Richardson makes a good-natured offering to swap sponsorship roles — Richardson will take Perk Choco, O’Brien can be Perk Milk. The two imrov comics run with it from there, but it’s Richardson’s smooth addition and supportive demeanor that keeps the quick bit clicking.

These little moments just keep building over the entire episode. Richardson gets accosted by an extremely enthusiastic dance partner, and he just goes with it. Quick quips while the two help out on a local cooking show build an easy three-way repartee. Interviews are smooth, and he’s never absent — just supportive, letting O’Brien do his thing while building off it like a good scene partner always does.

A lot of these attributes can be attributed to Richardson’s experience. His Second City training helps him stay quick on his feet in just about any situation. Many of the characters he’s known for — whether it’s Richard Splett on “Veep” or Sam Duvet in “Detroiters” — are incredibly nice guys who are often defined by how good they are and how good they make others feel. But all of those feelings are what makes for a good host. You’ve got to be funny, night in, night out, no matter the material. You’ve got to be welcoming, but more than that, you have to give off an aura that makes people feel good just because you’re around. You’ve got to build interesting conversations with anyone, and you have to be willing to put yourself out there for wacky, weird bits.

O’Brien can do it all and then some. It’s why he’s been an elite late-night host for decades now, and it’s certainly why he’s still finding new ways to connect with audiences. One wonders if Richardson could do the same. For an actor who’s looking to push himself into new territory, it would be a treat to see him host a special, a talk show, an awards ceremony or just about anything where he can don that sparkling tuxedo. Get this man a hosting gig — he’s ready for the real thing.