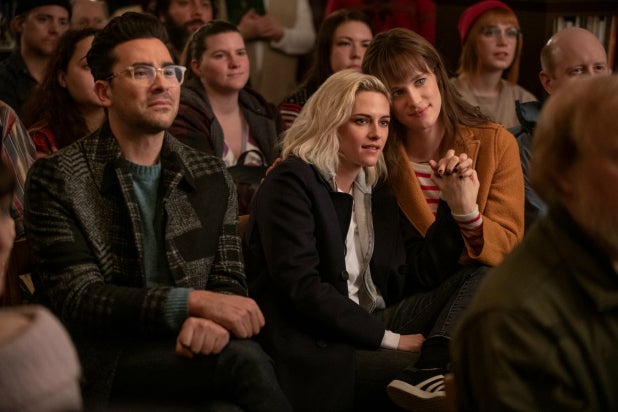 When I wrote the holiday movie guide “Have Yourself a Movie Little Christmas” a decade ago — and bemoaned the lack of LGBT stories being told in the seasonal sub-genre — I never could have predicted the bumper crop of 2020, which is offering queer-centric (or at least gay-inclusive) new movies from Lifetime, Hallmark, Paramount Network, and Netflix, as well as the arrival of “Happiest Season,” an all-star Christmas comedy with a major studio behind it. (Sony was set to release the film, until it moved to Hulu in the wake of widespread theater closures.)

“Happiest Season” isn’t the kind of “inclusive” movie where someone went through a heterosexual script with the find-replace function and changed the gender of one of the leads; this is a film in which identity, family, and the closet represents a major through-line. That it does so in the trappings of a Christmas farce may take some viewers aback, but director Clea Duvall (who co-wrote with Mary Holland) takes the serious parts seriously, but not so much that the magic of the holidays can’t make everything right.

The stakes here are higher than a traditional farce, one operating along the lines of “Lady Mathilde mustn’t find the scullery maid in Lord Reginald’s armoire, or he’ll lose his inheritance,” but there’s enough wit and breeziness to make this a holiday perennial for content-starved LGBT audiences, to be sure, but also for viewers looking to mix up their usual holiday playlist. Its many delights include the rare phenomenon of Kristen Stewart getting to play comedy outside of the occasional “SNL” hosting stint.

Stewart stars as Abby, a grad student who’s been together with journalist Harper (Mackenzie Davis) for a year. Harper loves Christmas, even though Abby associates the holiday with her parents, who died a decade earlier. After a tour of holiday yard displays, Harper impulsively invites Abby to come home with her for Christmas. Abby’s thrilled at the idea, so much so that she plans to propose to Harper on Christmas Day after asking Harper’s dad for his blessing.

The next day, Harper tries to pull back on the invitation, but Abby is too on-board, and it’s not until the road trip home is nearly complete that Harper drops a bombshell: She hasn’t come out to her conservative family yet, so Abby will be required to spend the trip pretending to be Harper’s straight roommate. (The fact that Abby is a terrible liar becomes one of several very funny running gags.)

The visit is a series of catastrophes, from Abby being accused of shoplifting to Harper spending lots of time with her high-school boyfriend Connor (Jake McDorman, HBO’s “Watchmen”). Abby meets Harper’s other ex, Riley (Aubrey Plaza), and learns that Harper outed Riley and told friends at school that Riley was stalking her rather than acknowledge their relationship. When Harper’s competitive sister Sloane (Alison Brie) learns Harper’s secret, an already-tense holiday celebration boils over into a full meltdown.

Duvall and Holland (who also co-stars as the third sister, Jane) fully acknowledge that Harper’s behavior is awful; staying in the closet is a personal choice, but to inflict it upon someone else is downright ugly. “Happiest Season” doesn’t shy away from the ramifications of its own plot, but for the most part, it never erases a path to redemption and reconciliation, mainly thanks to Stewart’s empathetic performance; she makes it easy for viewers to feel about Harper the way that Abby does.

It’s a strong ensemble all around; Davis keeps Harper from being utterly despicable, and the character’s politically-minded parents, played by Mary Steenburgen and Victor Garber, are awful in that very polite way without becoming full-blown boorish stereotypes. Brie maintains a slow boil of rage throughout that sets up the familial Armageddon at a crucial Christmas party.

Among the supporting players here, the MVPs are Plaza and, as Abby’s best friend, Dan Levy, both of whom swoop in and carry the movie away with just a raised eyebrow and a barbed rejoinder. They’ve both got that Eve Arden alchemy that allows them to be in a scene and commenting upon it at the same time, and “Happiest Season” elevates itself several levels when either of these two are sharing the screen with Stewart.

Cinematographer John Gulesarian (“An American Pickle”), aided by the art directors and set decorators, gives the proceedings all the coziness and twinkle lights that the season demands, and the score by Amie Doherty (“The High Note”) dovetails nicely with soundtrack producer Justin Tranter’s compilation of Christmas songs performed by the likes of Sia and Tegan & Sara.

While some viewers may find the use of the closet and societal homophobia too heavy for this breezy story, there’s a case to be made that including specifically queer concerns into the language of romantic comedy is another step toward genuine inclusiveness. “Happiest Season” takes a risky step in that direction, but the lingering aftertaste is sweet, not bitter.