Well what a mess the Legends are in, though apparently it’s slightly more complicated than the mess they thought they were in last week.

In the exclusive clip above from Monday’s season finale, Sara (Caity Lotz), Ava (Jess Macallan), and Charlie (Maisie Richardson Sellers) learn that the point of Neron’s magical creatures-finding app isn’t just to steal souls to rule Hell, as previously thought based on the pretty sticky terms and conditions. Actually, as Charlie explains above, it’s to steal fear, because fear is power and energy. And people are definitely very, very afraid right now, all thanks to Ne-Ray (Brandon Routh).

In last week’s episode, Gary (Adam Tsekhman) sent the Fairy Godmother, who he did not know was now Nora (Courtney Ford), to Hell to help Constantine find and save actual Ray, while the rest of the team worked to bring all the magical creatures Neron had imprisoned onto the Waverider.

While Constantine (Matt Ryan) and Fairy GodNora work on finding Ray, the finale will find the Legends and the magical creatures uniting to save the world, coming out of the shadows to act as actual superheroes. At some point, that involves Gary dressed as The Flash, Nate (Nick Zano) dressed as the Green Arrow, and Sara dressed as Supergirl. It looks like they’re filming some kind of video in the costumes, and promos have shown Nate joking about how they should have done the crossover. 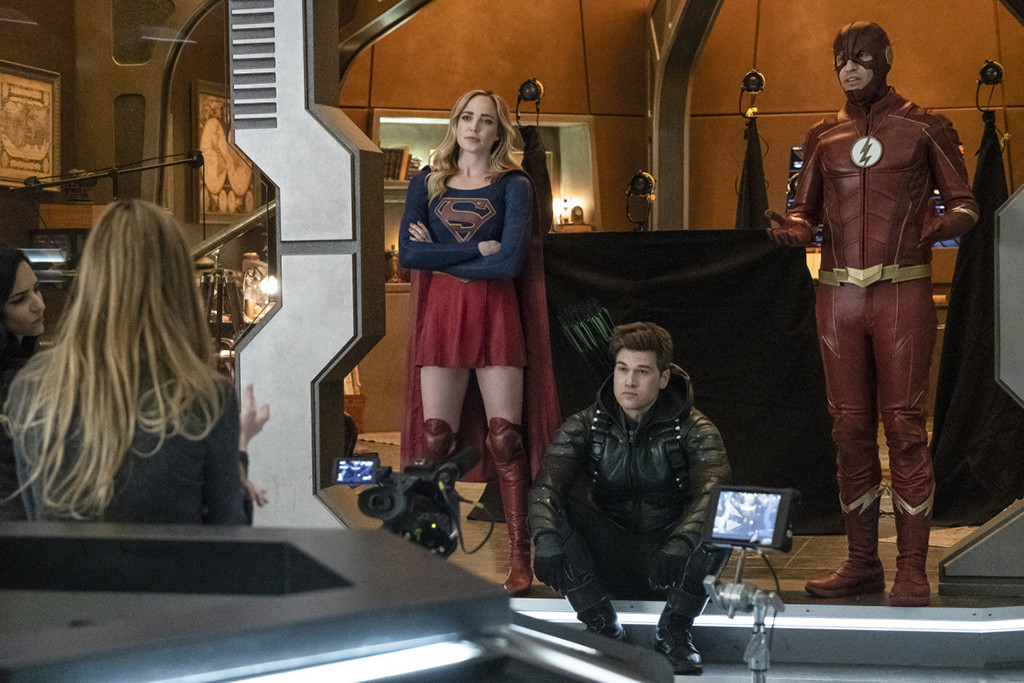 Of course he’s referring to last fall’s crossover, Elseworlds, which featured Supergirl, The Flash, Arrow, and a trip to Gotham as a preview of the upcoming Batwoman. This fall, the Crisis on Infinite Earths crossover will feature all five shows, including Legends.

CW President Mark Pedowitz revealed that the first three episodes will air in December, and the last two will air in January, when Legends of Tomorrow returns midseason. The crossover will also coincide with the end of Arrow, as its final season is only 10 episodes.

Pedowitz had previously said that while he couldn’t reveal if the crossover would follow the comics (in which the Flash and Supergirl both die, and all the earths merge, NBD), but it will take some “big swings.”

So far, both Arrow and The Flash ended their current seasons with teases for the epic crossover. Arrow showed Oliver (Stephen Amell) being taken by the Monitor to fulfill his end of the deal he made to save the Flash and Supergirl, and The Flash ended with the timeline of Barry’s (Grant Gustin) eventual disappearance moved up from 2024 to 2019, thanks to the reappearance of Eobard Thawne (Tom Cavanagh).

Similar teases are expected on Supergirl and Legends of Tomorrow, and the countdown to December is officially on.

Legends of Tomorrow‘s season finale airs Monday at 8 p.m. on The CW.