Alan Dean Foster is a legend among “Star Wars” fans as the author of the 1976 novelization of George Lucas’ original movie, published six months before the film’s opening under the title “Star Wars: From the Adventures of Luke Skywalker.” Foster stuck with the franchise to pen an original 1978 sequel book, “Star Wars: Splinter of the Mind’s Eye,” and then returned in 2015 when asked by J.J. Abrams to write the official novelization for “The Force Awakens.” In a recent interview with Midnight’s Edge, Foster opened up about the creative process behind writing his “Star Wars” books.

“I did my usual thing when I do these adaptations of trying to fix things that I think need fixing in the story and fixing in the science,” Foster said about his approach to writing “The Force Awakens” novelization. “Not so much with the characters, because the characters are fairly well-established in a screenplay. Some things they said to take out, and some things they left alone. Some of the things they said to take out I thought were silly and would really have improved the book.”

One request that “bothered” Foster while writing “The Force Awakens” was to remove the romance he was setting up for Rey and Finn, played by Daisy Ridley and John Boyega in the film. The two characters are not romantically involved in “The Force Awakens” movie, but Foster said Abrams’ screenplay was “obviously the beginnings of a relationship” between Finn and Rey.

Foster was forced to remove any inclination of a romance between the characters in his “The Force Awakens” book, as the film’s would later develop a sort-of romance between Finn and Rose Tico (introduced in “The Last Jedi” but nonexistent in “The Rise of Skywalker”) and a will-they-won’t-they between Rey and Kylo Ren (introduced in “The Last Jedi” and sealed with a kiss in “The Rise of Skywalker,” but Abrams said it was more a “brother-sister thing”). Foster was also forced to cut a line of dialogue he added to a scene between Rey and Han Solo.

“There’s a scene in the film and in the book where Rey has come aboard the Millennium Falcon, and Han Solo can’t get things to work, and she fixes it,” Foster said. “Han says something to the effect of ‘good work’ or ‘good job,’ reluctantly, he says it. And then I had him say, ‘Don’t get cocky, kid.’ Which, of course, is a throwback to what he says to Luke in the first film. I thought that was a wonderful way of connecting the character to the first film and the first story. I thought fans would love that, and they made me take it out.” 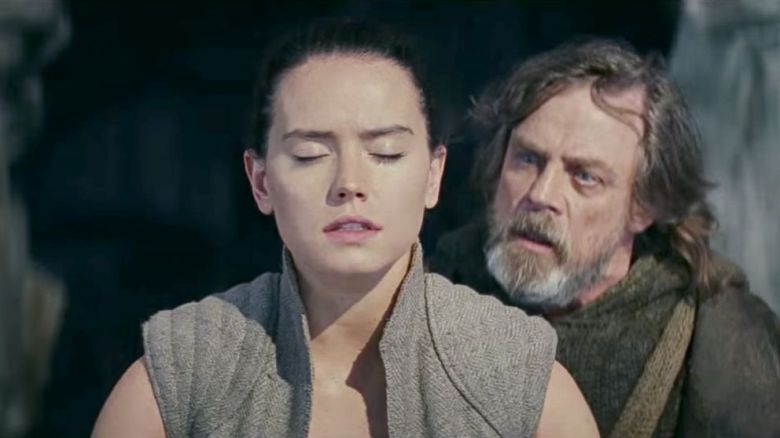 Speaking of “The Last Jedi,” Foster also revealed the existence of a treatment he wrote for an “Episode IX” book that retconned the events of Rian Johnson’s second installment of the sequel trilogy. Foster called “The Last Jedi” both “a terrible film” and “a terrible ‘Star Wars’ film,” adding that his treatment “attempted to explain a lot of the really silly things that happened” in “The Last Jedi.” The treatment was written for fans and was not something Disney commissioned.

One plot point the treatment retconned was how Rey “suddenly had more Force powers than anybody.” Foster came up with a storyline where Rey had a disease that required replacing part of her brain with mechanics, thus making her part droid and more able to quickly acquire a new skillset.

“That gives her the ability to learn remarkably quickly and also enhances her existing Force powers, and that’s how she can throw boulders around at the end of Episode VIII,” Foster said. “Also, it allows her to be instantly simpatico with other droids. I thought this would be a really fun story element, as well as explaining why and how she’s able to do these remarkable things.”

Foster has no plans at this time to make public his “Episode IX” treatment. Head over to Midnight’s Edge’s video page to watch Foster’s full interview in its entirety.