BBC series The Fall closed the curtains on the Belfast Strangler Paul Spector (played by Jamie Dornan) several years ago. However, the BBC show is being watched by many new people after coming to Netflix UK. One question many audience members are asking is about the accuracy and authenticity of the show.

How accurate is The Fall?

WARNING: This article contains major spoilers from all seasons of The Fall

British writer Allan Cubitt conceived The Fall, a story looking at the hunt for a serial killer, stalking women and murdering them in their own homes in Belfast.

The show was a deadly game of cat and mouse between Spector and Metropolitan Police detective Stella Gibson (Gillian Anderson).

Cubitt based the character of Spector on real-life serial killers Dennis Rader – also known by his self-styled moniker Bind Torture Kill (BTK) – and Edmund Kemper or The Co-Ed Killer.

Both these killers were based in America and became infamous due to their crimes. 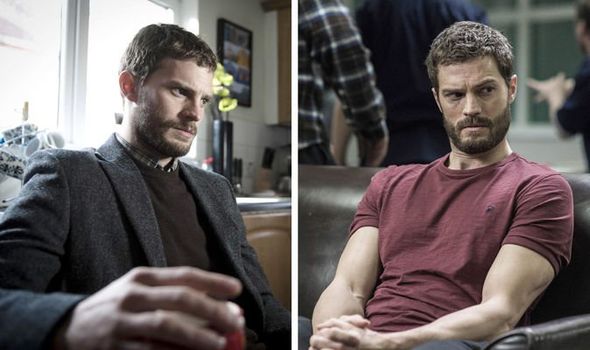 Spector was shown plotting his crimes out in intimate detail and making meticulous notes on his intended victims.

He also kept a journal in which he documented his sick fantasies, mixed with poetry and he tried to give his crimes some sort of higher meaning or purpose.

In the end, he was another narcissistic killer who believed he was far smarter than the police and could outwit them.

However, he was eventually caught by Gibson who worked tirelessly to track him down after he kidnapped one of his victims Rose Stagg (Valene Kane).

Once in custody, Spector was hoping to feign amnesia in an attempt to again evade justice, but Gibson promised he would pay.

Nonetheless Spector seemed to have the final word after he decided to take his own life.

He did it in the most chaotic manner possible, getting a fellow patient at his mental health facility to help start riot.

Spector was able to slip away and kill himself with the staff not realising until it was too late.

The Belfast Strangler also killed one last victim before this, leaving a trail of devastation in this wake.

A lot of Spector’s behaviour and crimes are based on real-life criminals but perhaps the one thing which seems to swerve away from the pattern of behaviour is how he met his demise.

Both BTK and Kemper are still alive with the former being a classic narcissist who believed he could never be caught.

Many of these personality types generally revel in the notoriety of their dark deeds rather than ending it all.

Other examples include Dennis Nilsen, Ian Brady and Jeffrey Dahmer who also remained in jail until their deaths.

On the flipside, some who chose to end it all were Fred West and Harold Shipman.

Speaking to Yahoo back in 2016 following the series finale of The Fall, Cubitt opened up about his ending versus how many of these cases really play out in real life.

He said: “I wanted the audience to think that he might be in the process of trying to get out.”

The critically acclaimed writer continued: “Yes, there comes a point where he thinks the game is up.

“I’m aware of the fact that, again in reality, quite a few of these individuals do, at that point in time, take the opportunity to take their own life because they want to maintain some kind of control, even if it’s the ultimate self-destructive control.

“The desire to control the situation, the desire to undermine any sense of Gibson getting satisfaction.

“And like I say, quite a few of these individuals say, ‘You’re not going to have that satisfaction’ — a bit like deciding to take Gibson to see Rose at the end of the second [season], it’s another attempt to regain control of his life. Even if in this instance it’s just his death, he’s in control.”

From his words, Cubitt suggests more times than not these personalities live and are fame-hungry for the legacy of their sordid crimes not to be forgotten.

The Fall seasons 1 to 3 are streaming on Netflix now