In the early 1960s two American-based researchers, Dr Peter B. Neubauer and Dr Viola Bernard, devised a study whose ramifications they couldn't – or didn't want to – comprehend. To quantify the nature-versus-nurture debate, the pair arranged for newborn twins and triplets to be put up for separate adoption, so the sibling's progress could be mapped and compared. The children and adoptive parents didn't know of the other children, nor the program's purpose. 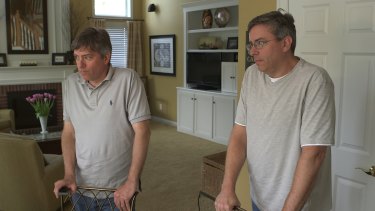 Howard and Doug, the brothers at the centre of The Twinning Reaction.

The intrusive scheme was revealed at the end of the compelling 2018 feature documentary Three Identical Strangers, but in Lori Shinseki's documentary it's the starting point for reunited 50-year-old identical twins Howard Burack and Doug Rausch. The pair's story is detailed, but the narrative also digs into the research program, highlighting the significant emotional trauma some children had to endure because they felt incomplete without their twin. This was science run amok, over decades, with people treated as mere subjects. The contrast of the data-driven research with the survivor's bonds is telling.