The French government caved to protesters on Tuesday because it had no choice, politically. It knew that unless it did so, the protests would continue, they would be ugly, and they would be considered the government’s fault.

And the scores of protesters who appeared before the courts in the hours after that decision showed why it was the right choice. 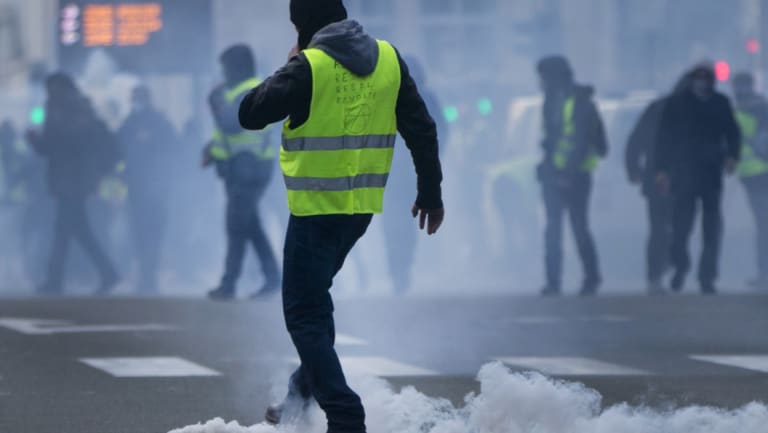 A demonstrator kicks a tear gas container back at police during a protest of the yellow jackets.Credit:AP

The government had tried to claim the scenes of violence and fury on the weekend, and the weekends before, had not been a genuine protest by ordinary French people outraged at government taxes and policies that hurt most those who could least bear the pain.

They claimed the gilets jaunes (yellow vest) movement, loosely organised on social media, had been hijacked by experienced, violent hard left and far-right provocateurs for their own purposes, and even fired up by viral fakes inserted into the internet by unknown, possibly Russian, hands.

But some of the 412 people arrested on Saturday began appearing before magistrates on Tuesday.

Among the mostly male people charged appeared to be exactly the kind of ordinary, frustrated, low-paid workers from rural France that had inspired the movement.

According to local reports, they included a 22-year-old business student and finance worker at the national post office, a 45-year-old butcher who had never joined a demonstration in his life, a 50-year-old nurse from Nice who regularly practiced yoga and meditation (she was among several instantly acquitted because police had no proof she had done anything wrong).

These are the ordinary people of France, angry at their President and their government over a range of issues, from tax to the minimum wage and even simply the attitude of Emmanuel Macron.

“The anger, you’d have to be deaf or blind not to see it or hear it,” he said. 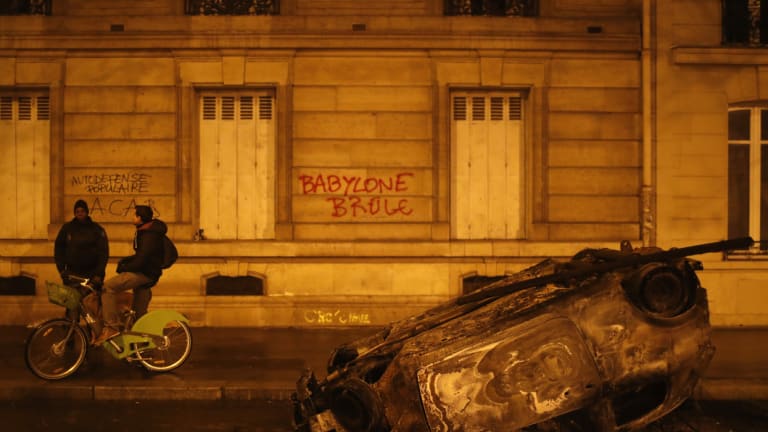 A burned out car and the slogan, “Babylon burns” in Paris on Sunday.Credit:AP

“The French who have donned these yellow vests want taxes to fall and work to pay. That’s also what we want… something must change.

“No tax is worth putting the nation’s unity in danger.”

To be sure, the group in the courts did seem to include some more troubled characters, according to local reports, too.

One truck driver was caught with an extendable metal baton, another man had a long history of crime and alcohol abuse, saying ruefully “alcohol ruins everything” after he was caught allegedly flinging rocks at police on Saturday.

Another 30-year-old unemployed man was described as an anarchist and arrested wearing a black sweatshirt with "ACAB" (all cops are bastards) on it.

According to French media, extremists involved with the loose gilets jaunes alliance were trying not just to change the law but overthrow the system.

More experienced with violent protest, they had melted away at key moments on Saturday leaving police to arrest others.

One researcher told the French press that around 300 ultra-right militants were there on Saturday, hoping the chaos would feed its political agenda and support its message that immigrants and Muslims were a threat to French society’s cohesion. 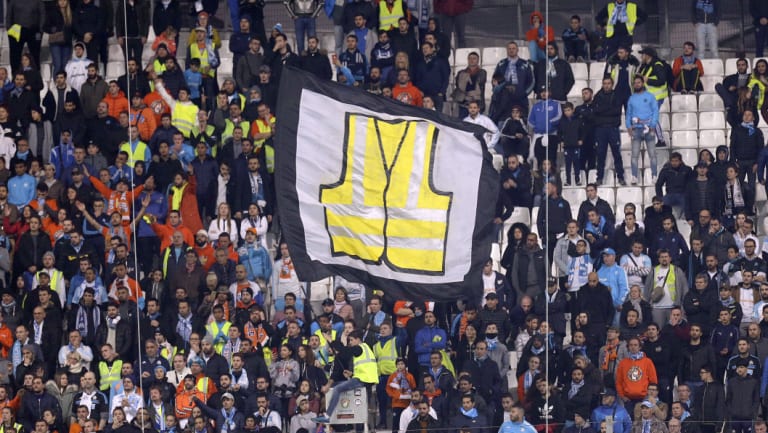 The so-called yellow vests, named after the vests every driver must keep in their car, protested new fuel taxes and the rising cost of living.Credit:AP

A brochure distributed before the protest claimed it was a “fight to save our nation and our civilisation”.

Far left groups had wrestled with their consciences (many had environmental campaigning background, and the tax being protested was intended to reduce diesel pollution). But they also turned out, in the hope it would overthrow what they see as a right-wing government.

More protests are planned. Indeed they are inevitable – passionate political street protests are a tradition in this country.

Their size and makeup will tell a story, whether anger has been sufficiently soothed by a big sign the government is now listening to its people.