Signs of immunity vanish quickly from seriously-ill coronavirus patients in less than a month after they are discharged from hospital, a study has found.

Researchers looking at antibodies – substances in the blood that develop immunity against the virus – have found they drop off sharply once a patient as recovered.

The finding is worrying news for hopes that people will become immune to Covid-19 after having it for the first time.

Most people who were sent home from hospital after having the disease did show signs of antibodies – suggesting their bodies had learned to protect themselves from the virus – but they were not strong.

Some 81 per cent of patients had the antibodies, the Chinese study found, but only a ‘small portion’ of them had any with the ability to neutralise – or kill – the virus.

Whether people become immune to Covid-19 after having it remains a mystery.

There are signs that the body learns to fend it off but also growing numbers of ‘credible’ cases where people get reinfected.

If the body cannot retain antibodies over the long-term it could mean that a vaccine may not offer permanent protection, as scientists and politicans around the world are hoping one will. 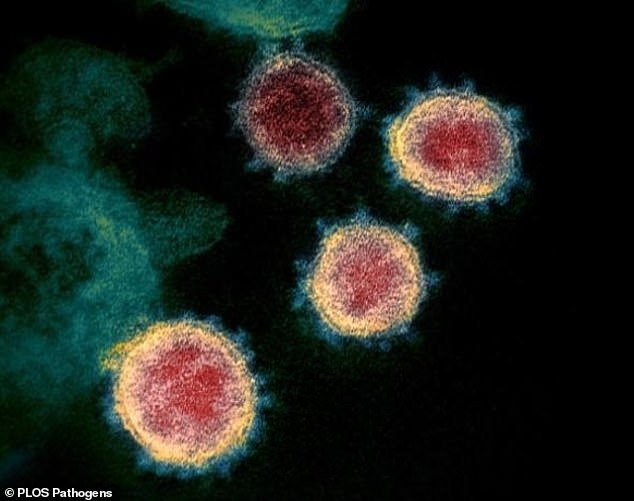 Scientists at Nanjing University Medical School in China monitored 19 non-severe and seven severely ill Covid-19 patients for a month and three weeks to determine the progression of their antibody response.

They found that the patients had a varying level of antibody responses, with only a ‘small portion’ developing a potent level of neutralisation activity. The scientists did not say exactly how many people had this.

The study indicates that three to four weeks after hospital discharge, the neutralising activity of antibodies from recovered patients declined significantly.

The authors wrote: ‘The world is facing an unprecedented challenge with communities and economies affected by the growing pandemic of coronavirus disease 2019 (Covid-19)…

‘The development of antibody response to Sars-CoV-2, the virus that causes Covid-19, started to be reported but remained largely elusive.

‘Understanding the adaptive responses where the body makes antibodies that specifically bind to the Sars-CoV-2 among Covid-19 patients provides fundamental information for developing effective treatment and preventive vaccine.’

Past studies have found the opposite to this one – that antibodies can last for months after someone is sick with the disease – while others have noted that people barely build up immunity at all.

Antibodies are substances produced by the immune system which store memories of how to fight off a specific virus.

They come in different forms and may attack viruses and destroy them themselves, or may force the body to produce other kinds of immune cells and white blood cells to do the dirty work for them.

They can only be created if the body is exposed to the virus by getting infected for real, or through a vaccine or other type of specialist immune therapy.

Once antibodies have been created once – the body essentially moulds them around a virus when it encounters one in the blood – the body usually retains a memory of how to make them and which ones go with which virus.

Generally speaking, antibodies produce immunity to a virus because they are redeployed if it enters the body for a second time, defeating the bug faster than it can take hold and cause an illness.

There is also some debate about whether the severity of illness plays a factor.

People who get seriously ill and hospitalised tend to have a stronger immune reaction and therefore are more likely to be protected in future.

While those who have only mild or even unnoticeable symptoms may not develop immunity at all.

There is no guarantee that people’s bodies do protect themselves, and scientists will only be able to confirm this with time.

Earlier this week, Health Secretary Matt Hancock said there were now ‘credible’ reports emerging of people getting the illness more than once – something that had been considered unlikely during the peak of the outbreak.

He told Parliament’s Health and Social Care Committee that the first ‘credible’ cases of coronavirus reinfection were starting to be seen.

‘We have also just started to see the first credible cases of reinfection and, through genomic analysis, you can see it is a different disease to the one the person got the first time around.

Mr Hancock’s latter point suggests that people do not become noticeably ill the second time around and do not get symptoms.

Commenting on the recent study, Danny Altmann, professor of immunology at Imperial College London, and British Society for Immunology spokesman, said: ‘After the initial publications about Sars-CoV-2 antibody assays and levels, important papers are starting to emerge which look at specificity and durability of the response in more detail.

‘Studies like this are a vital part of the ‘work-in-progress’ to make sense of who has immunity and how long for.

‘This paper makes a number of points: the gold-standard in assessing the antibody response to a virus is measuring ability to neutralise the entry of virus into cells, although this is not one of the routinely available tests.

‘Most convalescent patients show this response, though, importantly, 20% do not. Also, this antibody level declines in most people by the time of their follow-up appointment a month later.

‘Once again, evidence shows that the half-life of these antibodies in the blood is not particularly sustained.

‘We don’t know to what extent this is bad news unless we know the extent to which the white blood cells that make the antibody (B cells) are up and ready to defend against any repeat attack.’

The study was published in the scientific journal PLOS Pathogens.

THE MYSTERY OF COVID-19 IMMUNITY

Scientists still do not know for sure whether people can catch Covid-19 more than once or if they become immune after their first infection.

With some illnesses such as chickenpox, the body can remember exactly how to destroy it and becomes able to fend it off before symptoms start if it gets back into the body.

But it is so far unclear if people who have had coronavirus can get it again.

Tests have shown that many people who recover have antibodies – which can produce future immunity – but it is not known whether there are enough of them.

One doctor, Professor Karol Sikora, said he had found that only 10 per cent of people known to have had Covid-19 actually developed antibodies.

This means it is hard to measure whether they could fight it off immediately if infected again.

Another study, by the University of Melbourne, found that all patients in a group of 41 developed antibodies but, on average, they were only able to fend off 14.1 per cent of viruses if they were exposed a second time.

Research into other similar coronaviruses, which also infect humans but usually only cause mild illnesses, found that people did tend to develop protective immunity but their antibody levels dropped off within months and they could get reinfected again after around six months.

However, antibodies are only one type of substance that can produce immunity.

Others, including white blood cells called T cells and B cells, can also help the body to fight off disease but are more difficult to discover using currently available tests.

The Melbourne study found signs of elevated numbers of coronavirus-specific B cells and T cells in recovered patients, suggesting those types of immunity may be stronger than antibodies.

They called for more research on the subject.

A promising study done on monkeys found that they were unable to catch Covid-19 a second time after recovering from it, which led scientists to believe the same may apply to humans.

The rhesus monkeys were deliberately reinfected by scientists in China to test how their bodies reacted.

Because the coronavirus has only been known to scientists for seven months there has not been enough time to study whether people develop long-term immunity.

But, so far, cases of people getting infected more than once have not been numerous nor convincing.