Trump returns to Oval Office while recuperating from COVID-19

He's baaack… US President Donald Trump has returned to the Oval Office and to social media, tweeting broadsides against Democrats, floating false disease figures and pushing lawmakers to take up piecemeal economic aid proposals after nixing negotiations on a broader assistance package.

It was Trump’s first visit to the Oval Office since being discharged from Walter Reed National Military Medical Centre on Monday. While there, he was briefed on Hurricane Delta, which is bearing down on the US Gulf Coast, and on economic stimulus prospects. 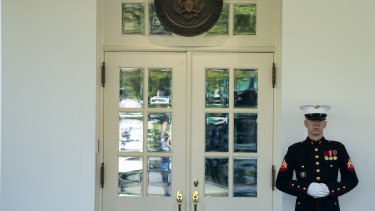 A marine is posted outside the West Wing of the White House, which means the President is in the Oval Office.Credit:AP

Trump’s doctor reported on Wednesday that the President continued to make progress in his recovery. Dr Sean Conley, the White House physician, said Trump had declared, "I feel great!"

Conley added in a memo that Trump had been symptom-free for over 24 hours, and that his oxygen saturation level and respiratory rate were normal. The memo also said a blood test Monday showed Trump had coronavirus antibodies, substances that fight infection, but he had been given an experimental drug on Friday containing these.

Regeneron Pharmaceuticals says it’s not possible for this type of blood test to distinguish between antibodies Trump’s body may be making and those supplied by the company’s drug. Most likely, the ones detected in the Monday test are from the drug, the company said.

The Centres for Disease Control and Prevention says individuals can discontinue isolation 10 days after symptom onset. While reports of reinfection are rare, the CDC recommends that even people who recover from COVID-19 continue to wear a mask, stay distanced and follow other precautions.

Aides were instructed to take extensive precautions to prevent themselves from catching the coronavirus from the President. And while aides say he is working, White House officials have offered scant details of what he’s up to beyond noting that he’s spoken with Republican leadership and worked with senior advisers in recent days.

Trump was working out of makeshift office space on the ground floor of the White House residence, in close proximity to the White House Medical Unit’s office suite, with only a few aides granted a face-to-face audience. The West Wing was largely vacant, as a number of Trump’s aides were either sick or quarantining after exposure to people infected with the virus, or otherwise working remotely as a precaution.

Italy has imposed a nationwide outdoor mask mandate on Wednesday with fines of up to €1000 ($1650) for violators, as the European country where COVID-19 first hit hard scrambles to curb second-wave infections rates.

The government passed the decree even though Italy’s overall per capita infection rate is currently among the lowest in Europe. 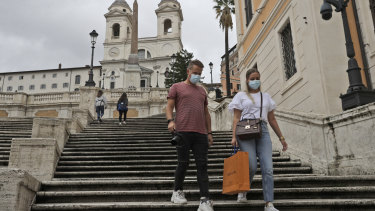 Visitors descend the Spanish Steps in Rome on Tuesday,Credit:AP

Prime Minister Giuseppe Conte warned that a steady, nine-week rise in infections nationwide demanded new preventive measures to stave off closures and shutdowns that would prove devastating for the economy.

"We have to be more rigorous because we want to avoid at all cost more restrictive measures for productive and social activities," Conte said.

The decree was passed on the same day that Italy added 3678 new infections and 31 victims to its official coronavirus toll, the highest increase in new cases since the peak of the outbreak in April. Both hard-hit Lombardy and southern Campania added more than 500 cases each.

Italy now has more than 36,000 confirmed COVID-19 deaths, the second-highest number in Europe after the UK.

The numbers are going up in France – almost 19,000 cases over the last 24 hours – and restrictions are set to get tougher again. Here's the latest from Paris:

France reported on Wednesday a second daily record of new COVID-19 infections in five days, with almost 19,000 additional cases over 24 hours, while hospitalisations for the disease stood at a three-month high. 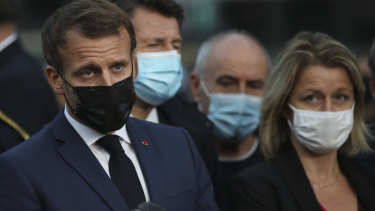 French health authorities said there were 18,746 extra cases, versus a previous record on October 3 of 16,972 and also sharply up from Tuesday's tally of 10,489.

The total number of cases since the start of the pandemic in March now stands at 653,509, the world's 10th highest.

French President Emmanuel Macron flagged new restrictions to contain the pandemic, which come on top of measures already put in place by the government, such as bars being ordered to close at 10 pm in major cities including Paris.

"In places where the disease is circulating too quickly … there will be new restrictions," Macron said during an interview aired on France's two main television channels.

Good morning from rainy, locked-down Melbourne. I'm Hanna Mills Turbet and I'll be bringing you all our COVID-19 news until early this afternoon.

Feel free to shoot me an email – [email protected] – or leave a comment in the blog if you have any news tips or something to share.