A British holidaymaker has been forced to swap her luxury Greek break for quarantine in ‘squalor’ following an airport Covid test that came back positive.

Paula Henry says she is surviving on Pringles and Jelly babies after she and husband Wesley Seale were whisked from five-star splendour to a ‘scruffy’ cockroach-infested ‘hell hole’.

The pair were ordered by Greek authorities to abandon the £3,200 holiday after just three nights in their pool-side suite at the swish Princess Andriana Resort & Spa in Kiotari.

Now they are isolating in separate rooms at the £30 a night Maritime Hotel Apartments near Rhodes – under 24-hour CCTV surveillance – but they still have not seen the paperwork for her test. 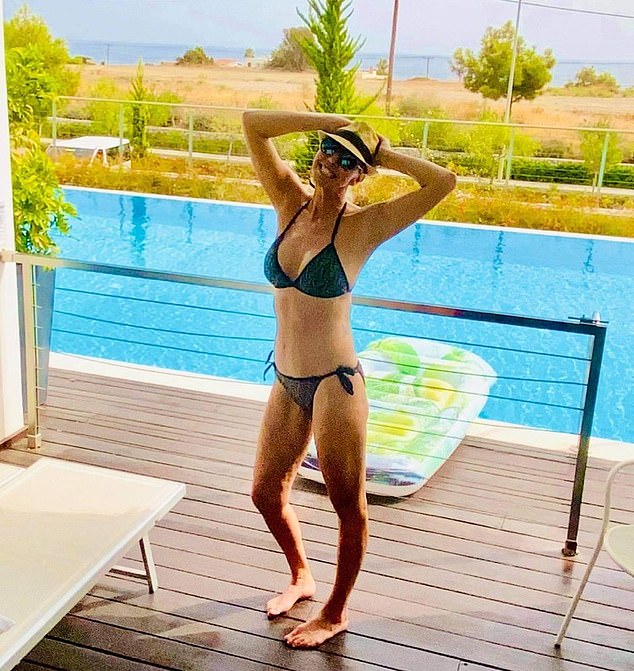 Paula Henry, 48, and Wesley Seale, 43, were forced to leave their £3,200 luxury holiday at Princess Andriana Resort & Spa in Kiotari, Greece, (pictured) early after her airport test for coronavirus came back positive 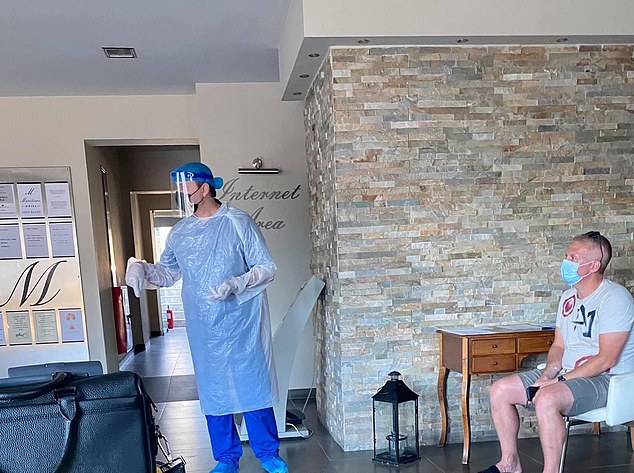 Despite not seeing the paper work for her test, the couple were split up and forced to move to the ‘hellhole’ Maritime Hotel near Rhodes and isolate alone. Pictured: Wesley (right) with the hotel doctor, dressed in PPE, who charged Paula £150 to have her temperature taken 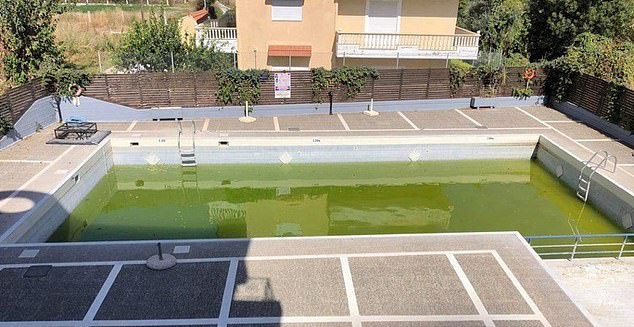 They swapped a luxurious pool-side suite at the resort they’d booked for a view of this slimy, green swimming pool at the Maritime Hotel – which they can not even use because they are confined to their rooms

Paula, 48, from Manchester, said: ‘We’ve been warned to not even try leaving the room or it’s ten years in prison and a hefty fine.

‘I’ve had to double wrap my mattress to keep the bed bugs at bay and I’m fighting a nightly battle against an army of cockroaches.

‘The food is inedible and I’ve got one book to help pass the time – I’m reading very, very slowly.’

Barber shop owner Paula explained how she had two negative Covid tests in the UK before flying to Greece with Wesley on Tuesday, October 6. 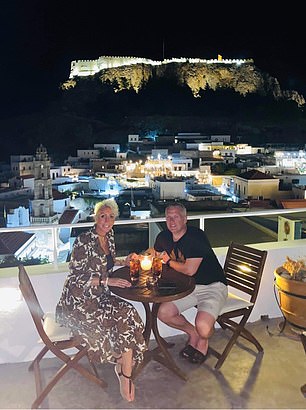 Paula Henry and Wesley Seale enjoy a romantic meal in Lindos, Greece, before their luxury break took a turn for the worse

Paula said: ‘I’d been back at work for a while and decided in September that myself and the staff should get tested, just to keep ourselves and our customers safe.

‘Wesley came as well as he knew we were going away, and both our results came back negative on September 17.

‘I followed up with a private antibody test a couple of days before we flew to Greece, and that was negative, too.

‘Of course, we knew there was always a slim chance that we’d end up having to quarantine, so Wesley had booked a room with our own, private swim-up pool.

‘We thought that if anything went wrong, at least we would be able to isolate in comfort.’

Paula was selected for a random swab test at the airport on arrival in Greece.

The pair enjoyed romantic meals in Lindos and at their luxury resort before deciding on Friday last week to hit the beach.

‘We had a couple of days relaxing in luxury,’ said Paula.

‘The room was gorgeous. We’d gone all out on this trip as it’s been such a rubbish year, and spent way more than we would have otherwise.

‘The food is appalling,’ says Paula. ‘I’ve had cold chips and cold kebab meat that looked like bits of fried skin’

‘On Friday we fancied a day on the beach and we’d just parked on some sun loungers when my phone rang from an Athens number.

‘I was told I’d tested positive for Covid at the airport, and we had to return to our room immediately.

‘Back at the hotel, a doctor arrived and said he had to check my temperature in case I needed to go to hospital.

‘My temperature was fine – but the doctor made us pay £150 on the spot for the test!’

The couple were told by hotel management to pack their belongings as they were being moved to new accommodation. 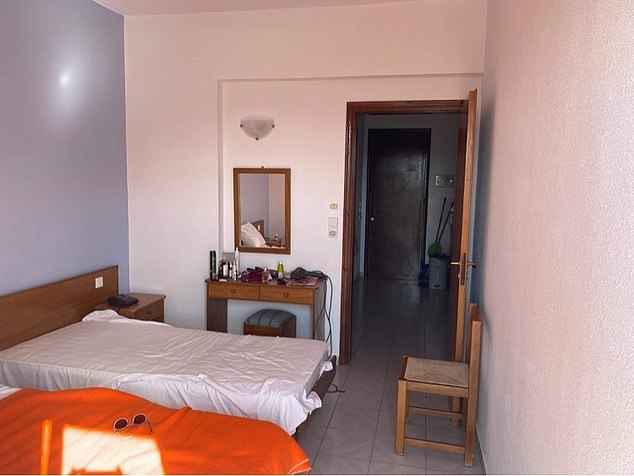 ‘We asked where we were going and what was going to happen,’ says Paula.

‘They said we had to get in the waiting van as we were going to the “Covid hotel”.

‘They wouldn’t say where it was. It felt like we were being kidnapped.’

Paula says they were driven an hour to the Maritime Hotel and discovered on arrival that Wesley would be isolating in a separate room.

‘A doctor greeted us in full PPE,’ she explains. ‘At that point it dawned on us that we hadn’t actually seen any test results.

‘We asked for them but were told they didn’t have them. 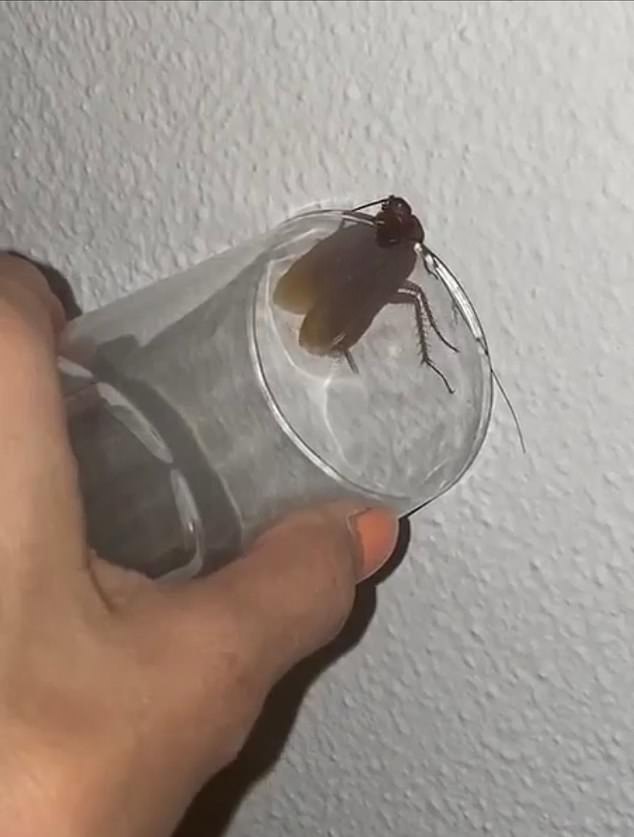 Paula said: ‘The room is disgusting. It hasn’t been cleaned – there were half-used toiletries left in the shower – and every night I’m chasing around after cockroaches’

‘I requested a second test as I felt absolutely fine with no symptoms at all, but the doctor said if I had another and it came back positive, I would be staying here even longer – so there would be no more tests.

‘We begged them to let us stay in the same room, but they were adamant. We’re keeping in touch by phone but haven’t seen each other since we got here.’

Paula, who beat breast cancer after being diagnosed eight years ago, says her battle left her with a low immune system and she is ‘convinced’ she is Covid-free.

‘I know my own body,’ she says. ‘Usually, if I get a cold or flu it absolutely floors me because my immune system is shot to pieces, yet I feel 100 per cent fine. 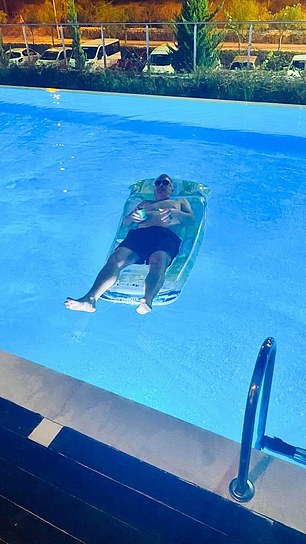 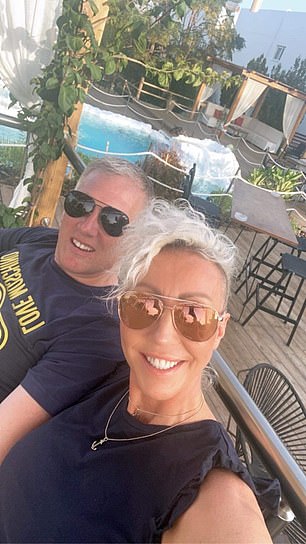 Paula, who beat breast cancer after being diagnosed eight years ago, says her battle left her with a low immune system and she is ‘convinced’ she is Covid-free

‘We still have no proof of a positive test and I’m sure a mistake has been made.’

The couple were due to fly home with Jet2 yesterday but instead Paula is confined to quarters for another six days, while Wesley must remain until Friday.

Paula said: ‘The room is disgusting. It hasn’t been cleaned – there were half-used toiletries left in the shower – and every night I’m chasing around after cockroaches.

‘We’re served three ‘meals’ a day – there’s a knock at the door and you open it to a plastic bag hanging on the door handle.

‘The food is appalling. Everything is stone cold, as though it’s been cooked and then stored in a fridge. 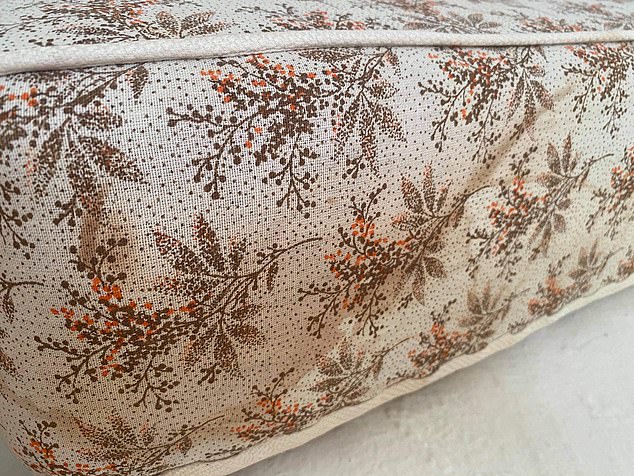 Paula’s mattress in her covid quarantine room is covered in stains. Paula  had two negative Covid tests in the UK before flying to Greece with Wesley on Tuesday,  October 6 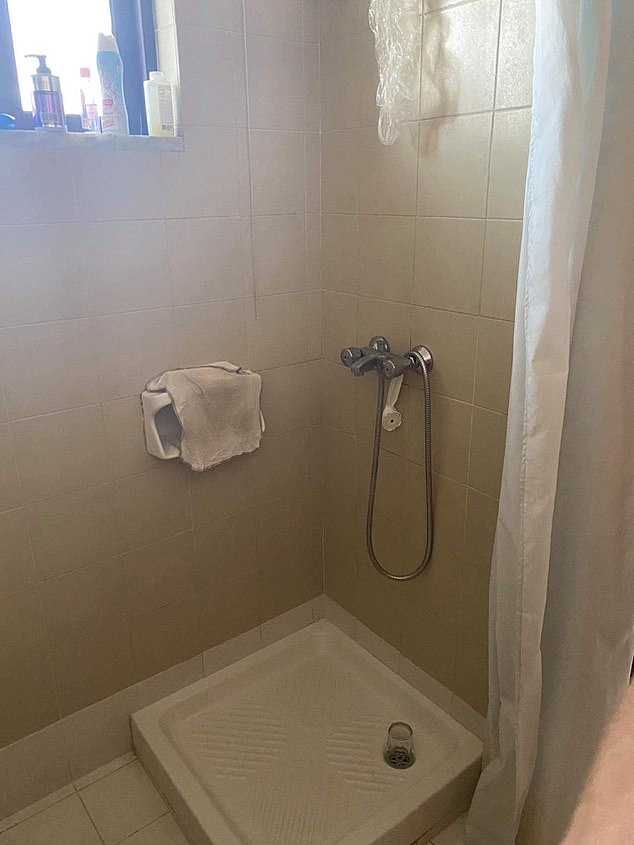 Pictured: The bathroom in Paula Henry’s £30-a-night room at the Maritime Hotel

‘I’ve had cold chips and cold kebab meat that looked like bits of fried skin. Yesterday I was left a boiled egg and a cucumber and cheese roll.

‘I only realised later when there was no food for the rest of the day that that must have been breakfast and lunch in one delivery. They forgot to bring dinner altogether.

‘Luckily I came in here with two tubes of Pringles and a couple of bags of Jelly Babies. I’ve been rationing them out for the last four days.

‘I brought a bottle of brandy, too, but that’s down to dregs – it’s the only way I can get to sleep at night.’ 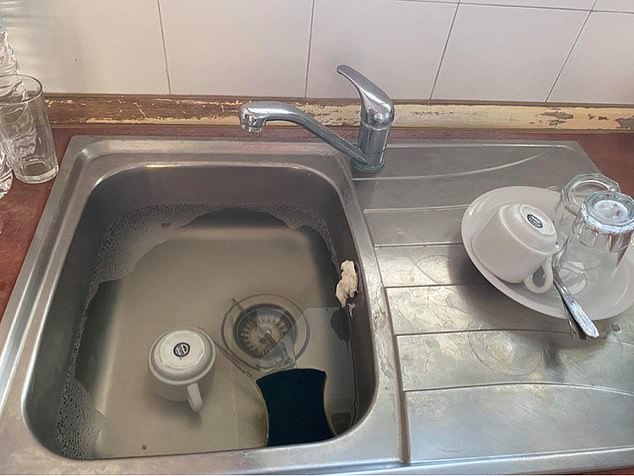 Paula says the pair have rearranged flights home to the UK next week.

Financial adviser Wesley, 43, plans to remain in Greece until Paula is allowed to leave the hotel.

Paula said: ‘There’s a track through the wasteland that my fourth floor balcony overlooks so at least he’ll be able to stop by for a chat.

‘I will, of course, be taking another test as soon as we’re back in Britain.’