Terrified daughter, 26, trapped in Grenfell Tower ended final phone call to her mother so she wouldn’t hear her screaming when she died

A woman trapped in Grenfell Tower ended a phone call with her mother so she would not hear her screaming as she died, an inquiry heard.

Emanuela Disaro received several calls from her daughter, Gloria Trevisan, 26, who was trapped on the top floor of the burning tower block alongside her boyfriend Marco Gottardi, 27.

As the fire worsened, Ms Trevisan, an architect, went through ‘panic, terror, concern, awareness and then resignation’ as she realised crews had ‘stopped trying to go up’, her mother said. 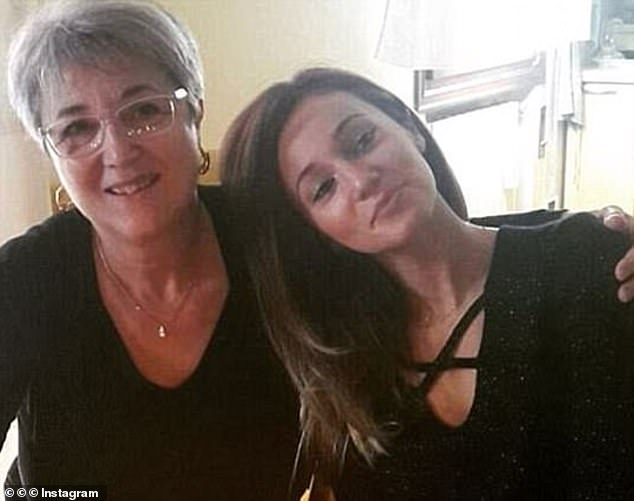 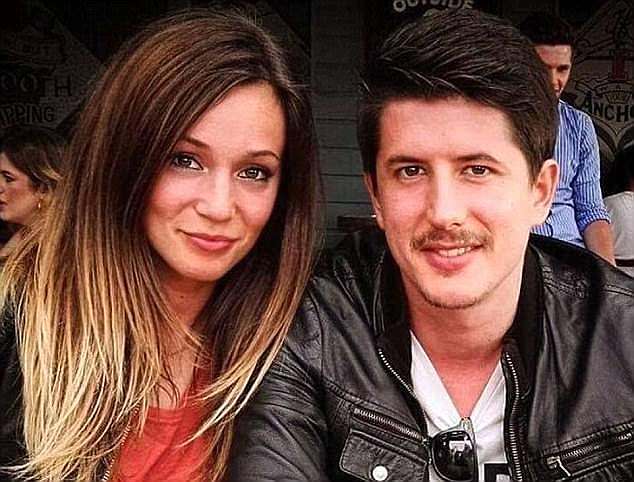 Gloria Trevisan, 26, and boyfriend Marco Gottardi, 27, were architecture graduates and were captivated by the views over the capital they enjoyed from their 23rd floor flat

The last phone call she made was at 3.45am on June 14 last year and lasted for 22 minutes.

In a written statement to the public inquiry into the blaze, in which 72 people lost their lives, Ms Disaro said: ‘I realised at this point that there was no hope.

‘Gloria told me ‘I’m throwing myself out of the window … the fire is everywhere, we’re just waiting’.’

She continued: ‘At a certain point she told me fire was coming through the window.

‘She wanted to stop the call. I told her I felt powerless. She continued to say she couldn’t breathe. 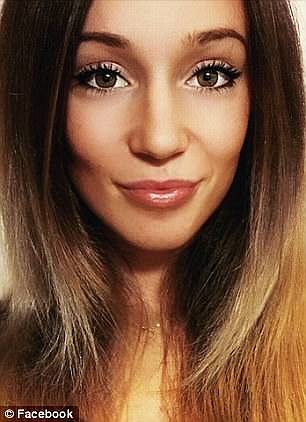 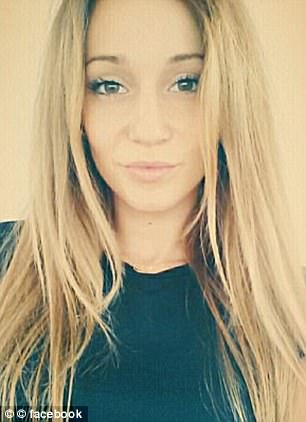 ‘She told me again what she felt for us and that we have to say goodbye and we had to be strong.

‘At that point Gloria said she was cutting off the phone because she didn’t want me to hear anything and she said goodbye to us.

‘She wanted to cut off the phone because she didn’t want me to hear her scream. She said she wanted to faint and she wouldn’t feel anything.’ 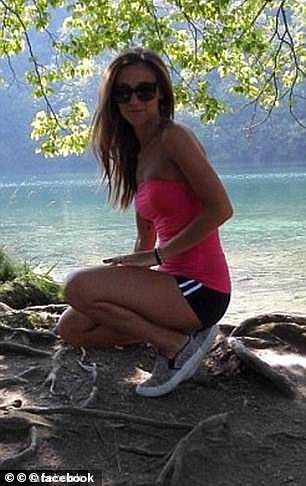 Gloria’s mother told the inquiry that her daughter, pictured above, ‘told me “I’m throwing myself out of the window … the fire is everywhere, we’re just waiting” ‘

Ms Trevisan and Mr Gottardi came to England from Italy in March last year. The couple had tried to escape via the roof of the tower but were blocked by a locked gate, Ms Disaro said.

She added: ‘I don’t understand how Gloria and Marco couldn’t have got out in the hour-and-a-half they had from when they were woken up.’

Gloria’s father, Loris Trevisan, agreed that ‘there was enough time to get out’.

When Emanuela Disaro spoke to Italian daily La Repubblica earlier this year, she said  her daughter said to her: ‘I am so sorry I can never hug you again. I had my whole life ahead of me. It’s not fair.

‘I don’t want to die. I wanted to help you, to thank you for all you did for me. I am about to go to heaven, I will help you from there.’

The 30 errors that resulted in the Grenfell tragedy

Here are the 30 errors which resulted in the Grenfell Tore fire which left 72 people dead.

1 There is no statutory requirement for central alarm systems in tower blocks because it would conflict with the policy of residents ‘staying put’ in flats.

3 Firefighters should have directed their hoses on or above the fire, but videos show they were being targeted below.

4 A pipe system to get water up the 24-storey block could not cope and was overloaded – leaving the upper floors, where most people died, vulnerable.

5 Water pipe failure meant fire crews had to pump their own water onto the fire.

6 The failure of the fire lift system delayed firefighters.

7 Advice for residents to stay put in the event of a fire was futile within half an hour of the blaze breaking out – but still slavishly adhered to for another 80 minutes.

9 Two types of cladding and four different insulation layers did not comply with building regulations.

10 Two cavity barriers did not have the required fire performance certificates.

11 The cladding produced toxic smoke that slowed the firefighters as it forced them to wear breathing apparatus.

12 Designers and builders had no idea how the cladding system would perform in a fire as no tests were carried out.

13 Neither the London Fire Brigade nor Kensington and Chelsea Tenant Management Organisation, which was responsible for Grenfell, carried out risk assessments of the cladding.

14 Flammable aluminium panels fixed to the tower and on more than 300 other blocks across England were never subjected to a full British Standard fire test.

15 Stairwell was too narrow and soon became impassable thanks to smoke, darkness, firefighters and distressed and dying victims.

16 An architectural feature called a ‘crown’ at the top of the building caught fire and also helped the blaze spread horizontally.

17 Design of tower blocks is supposed to ‘compartmentalise’ fires into individual flats – but this was not effective at Grenfell.

19 Fire stops between each floor were not installed correctly, meaning nothing stopped the blaze leaping up the tower.

20 A ‘culture of non-compliance’ appeared to exist in the maintenance of the tower.

21 Most of the fire doors leading to the 120 flats were relatively new but did not comply with building regulations.

22 Some doors failed within 20 minutes even though they should have blocked fire for an hour.

23 Doors were fitted with a variety of different locks, hinges and letter plates that could significantly reduce fire resistance.

24 Forty-eight doors had glazing that failed and allowed flames and smoke to pass directly through.

25 Fourteen of the doors to Grenfell’s flats were of unknown origin.

26 Some doors designed to ‘self-close’ failed to do so, allowing the fire to spread more quickly.

27 Doors were left open by fire hoses and in one case, a body.

28 Defective windows installed in the 2012-16 refurbishment allowed the fire to spread from a single kitchen to the external cladding through gaps in frames.

29 Windows had no fire-resistant cavity barriers encasing them and these openings were surrounded by combustible material.

30 During refurbishment, the windows were fitted in an ‘improvised manner’ that may have made them less safe.

And Mr Gottardi had told his father Giannino: ‘There’s a lot of smoke but don’t worry, we’re waiting for the rescuers.

‘We opened the front door but there was too much smoke to be able to leave. The lifts are blocked.’

Miss Trevisan was identified by her dental records and the cause of her death was given as ‘consistent with the effects of fire’ at a short inquest hearing in July.

The pair, both architecture graduates, moved to London three months before the fire to look for work.

Their location high up the tower would ultimately prove fatal, and as the flames rose towards their flat they both made horrifying final phone calls to their families.

Earlier this year Gloria’ mother told Channel 4 News: ‘You feel helpless faced with something like that.

‘You don’t know how to help that person, the person you love the most. A person who is part of you.

‘And yet she told me right from the beginning that it was impossible to get out. It wasn’t true. For us it wasn’t happening. It was like a film, a nightmare, but it wasn’t real.

‘We couldn’t get it into our heads that it was true. Then we saw the pictures live on TV. We saw Grenfell on fire, that it really was for real. Then we believed it.’

Yesterday’s inquiry also heard that a 12-year-old girl who died in the fire begged ‘come get me, come get me’ in her last conversation with her mother, who said the local authority failed the family.

Ms Ramirez immediately booked an Uber back to the tower after being alerted to the fire by her older daughter.

In a written statement to the public inquiry, she said: ‘The second call from Jessica was very brief, as the line soon cut off. I remember asking Jessica where she was and telling her to come downstairs.

‘She was panicked and kept repeating, ‘come get me, come get me’.

‘She sounded terrified. I remember her saying she was on her way down. The phone then cut out.’

Ms Ramirez, who lived on the 20th floor, spoke of the pain she experiences when reliving the night she lost her daughter.

She said: ‘I find it unbearably painful to relive the night I lost Jessica and my memories of the night are very blurry.

‘I just can’t cope with speaking about that night.’

The latest day of evidence in the inquiry also heard a father told his pregnant daughter to ignore firefighters and flee Grenfell Tower, believing it was better to ‘die trying than just burning alive’.

Mohamed Yahya, who lived in Barandon Walk, a neighbouring block, said he was in ‘complete disbelief and was petrified for my family’ when he stood at the foot of the tower as it was engulfed by flames.

His daughter, Rabia Yahya, who was 21 weeks pregnant, was trapped on the 18th floor with her three children.

The public inquiry into the blaze has previously heard she was repeatedly told by 999 call operators to stay inside her flat, while friends and relatives outside the block urged her to leave.

In a written statement to the inquiry, the grandfather said: ‘I kept shouting at her saying ‘come out! Why aren’t you coming out?’

‘She said that she couldn’t as the smoke was so bad and whenever she opened her front door she couldn’t see anything.

‘She also said that the firemen had told her to stay inside.

‘I was shouting at her saying ‘don’t listen to the firemen. Come out!’

‘I could see the fire from outside and I could see that it was approaching her flat and yet the firemen were telling her to stay inside. I just couldn’t understand it.

‘I just thought to myself it was better for her to die trying than just burning alive and not even trying to escape.

‘I couldn’t understand why she was being told to stay when I could see the fire moving to where she was.’