A major forest fire that destroyed 480 acres of protected woodland and killed hundreds of creatures was caused by day-trippers starting a barbecue, it was revealed today.

Fire investigators have found the remains of two disposable barbecues amid the blackened landscape of Wareham Forest in Dorset.

They say that these discarded items are most likely to have accidentally ignited the tinder-dry forest and heathland that is a Site of Special Scientific Interest and one of the most important in the UK for rare reptiles. 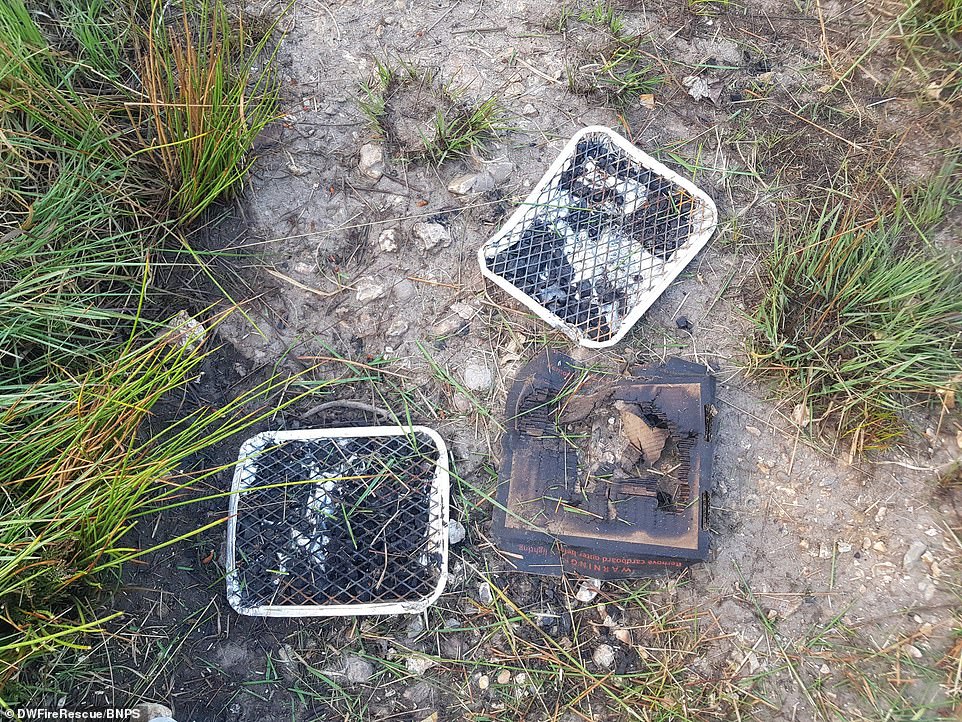 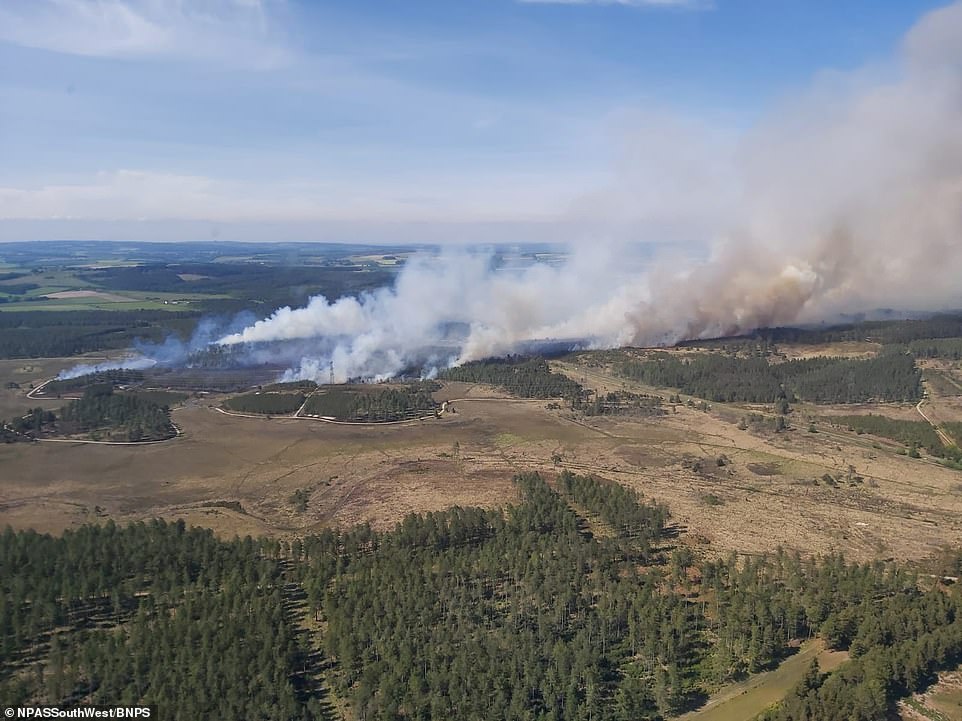 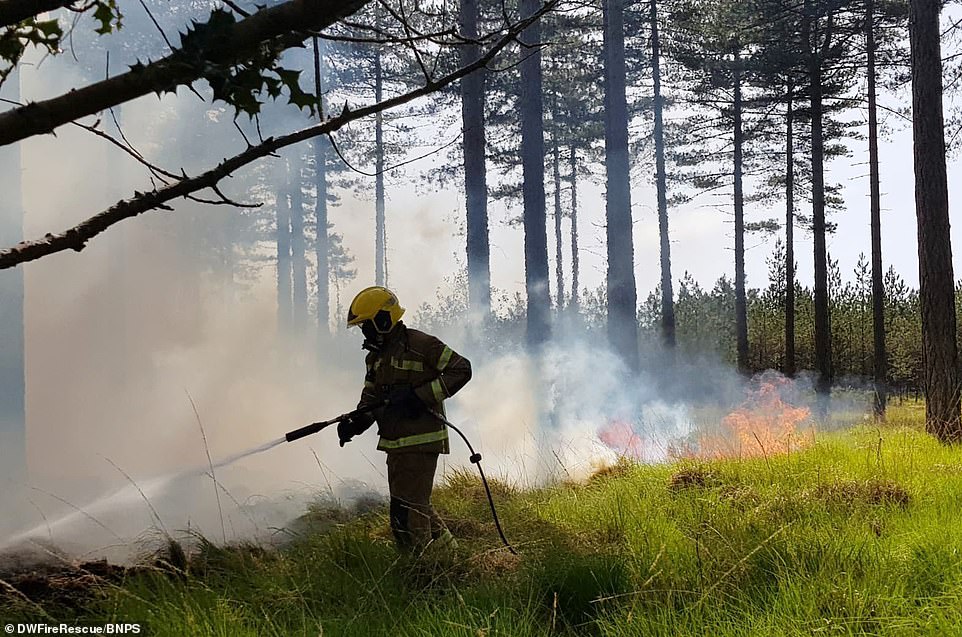 At its height, more than 150 firefighters were involved in the effort to battle the blaze over the course of 48 hours 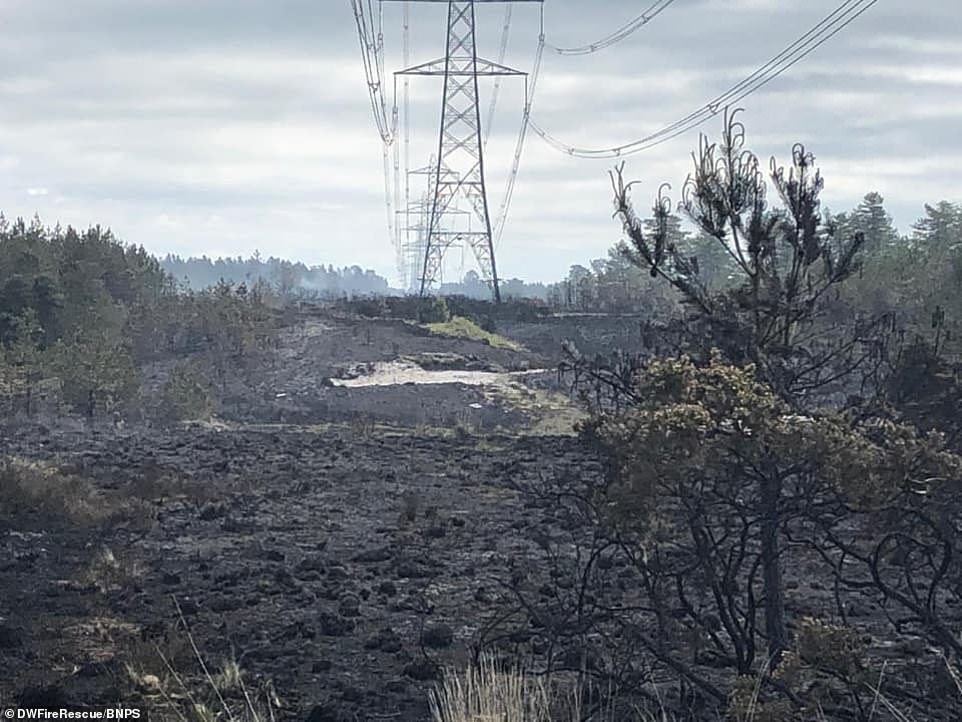 The blaze erupted on Monday lunchtime due to ‘social activity’ in the forest.

The flames were quickly fanned by a strong breeze and rapidly spread across the forest. It was so fierce that at one point it jumped over a public road.

More than 150 firefighters spent two days tackling the blaze and have been at the scene all week damping down hot spots.

As well as the destruction of vast heathland that is an important habitat for wildlife, thousands of reptiles including grass snakes, adders, lizards and slow worms were killed in the fire.

A spokesman for Dorset Fire and Rescue said: ‘Following a fire investigation we now believe the cause of this fire to be accidental, due to social activity in the forest.

‘While we cannot pinpoint the exact cause, we have found evidence of multiple disposable barbecues, campfires and glass bottles.’ 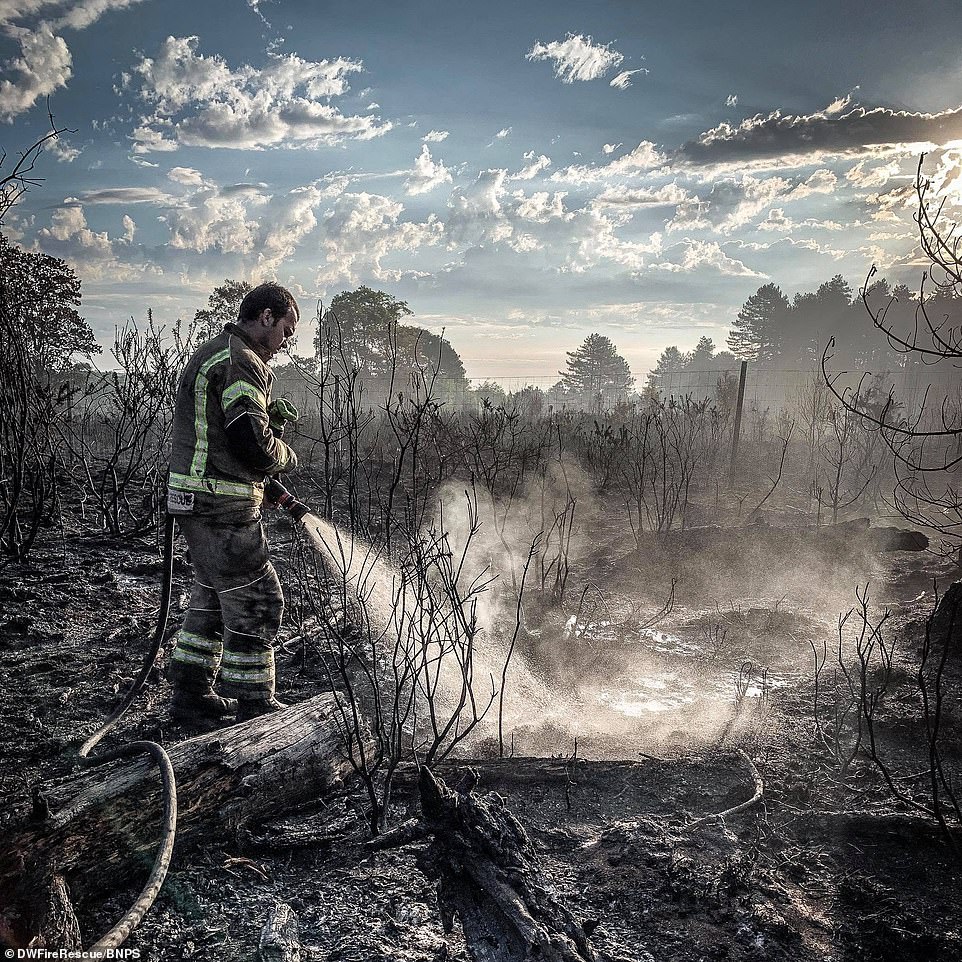 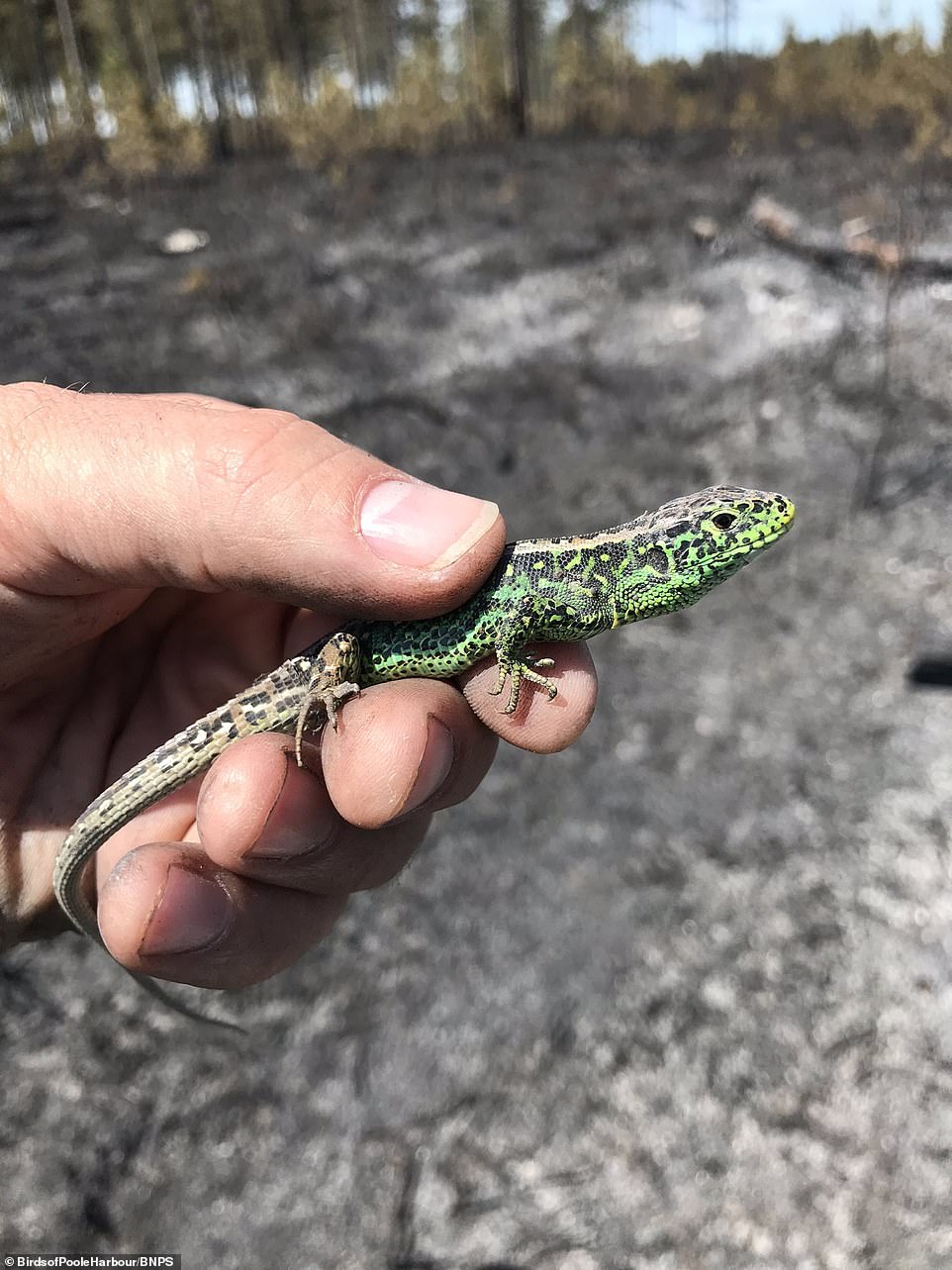 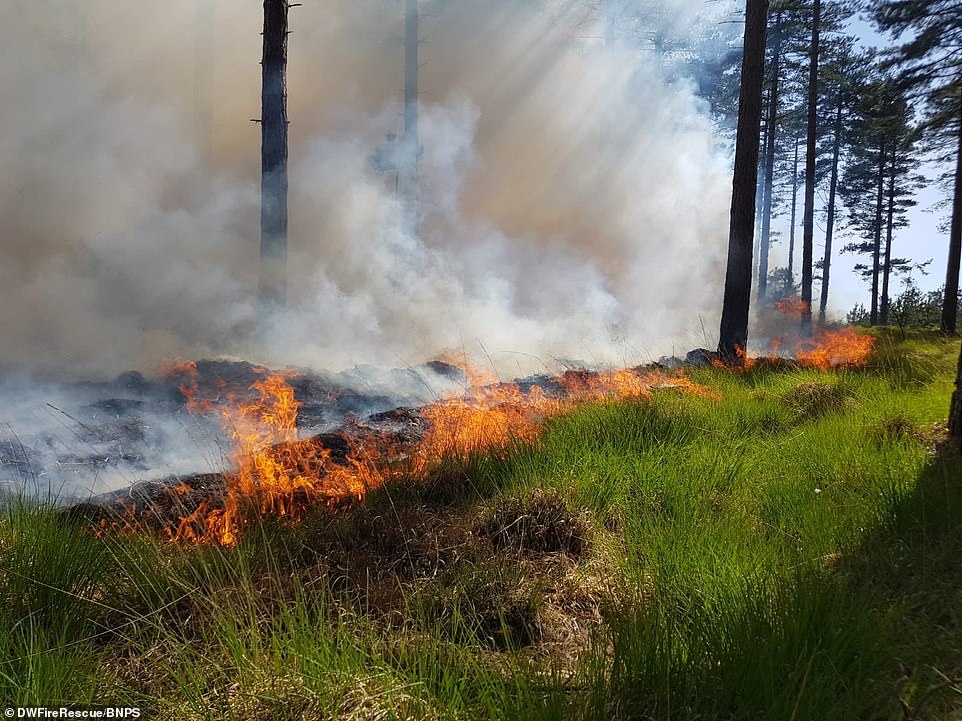 Incident commander Seth Why added: ‘The general public has no right of access to that area. People shouldn’t be using disposable BBQs out in the countryside.’

Dorset Police has since closed a criminal investigation it launched since it was established the caused was accidental.

Wareham Forest is part of a large area of heathland and is recognised internationally for the rare habitats and wildlife that lives there, including birds such as the nightjar and Dartford warbler and every UK reptile species, including the rare smooth snake and sand lizard.

Wildlife experts said the fire could not have happened at a worse time as all the nesting birds would have had to abandon their eggs or young to escape the fire.

Several charities and organisations have been helping with the clear up and rescue mission, including the Amphibian and Reptile Conservation Trust (ARC).

A spokesman for ARC said they rescued about 40 common lizards, 15 sand lizards and two common toads. 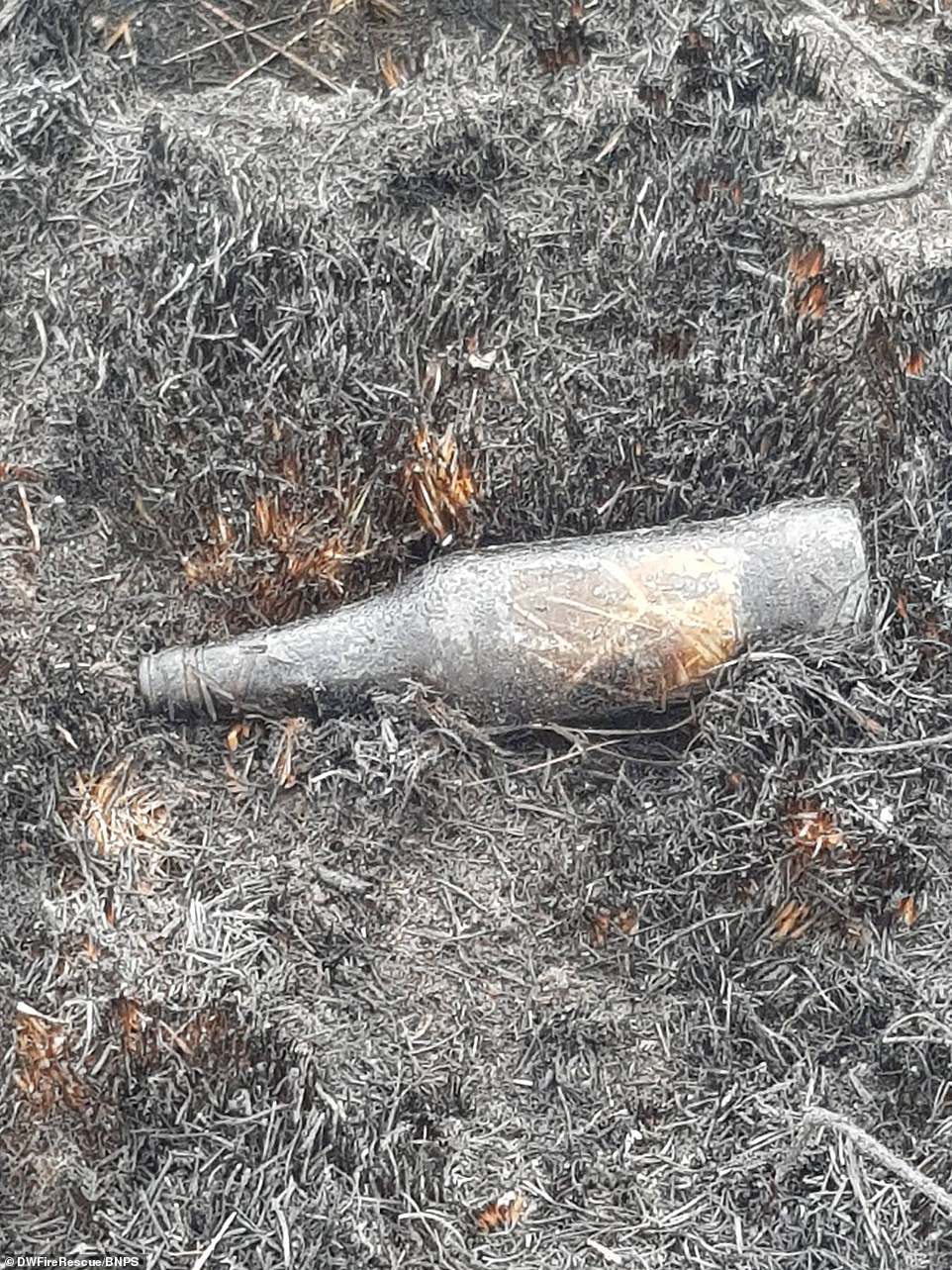 Firefighters found glass bottles as well as barbecues at the scene. A glass bottle can focus the sun’s rays onto tinder-dry grass and start a fire which would spread rapidly 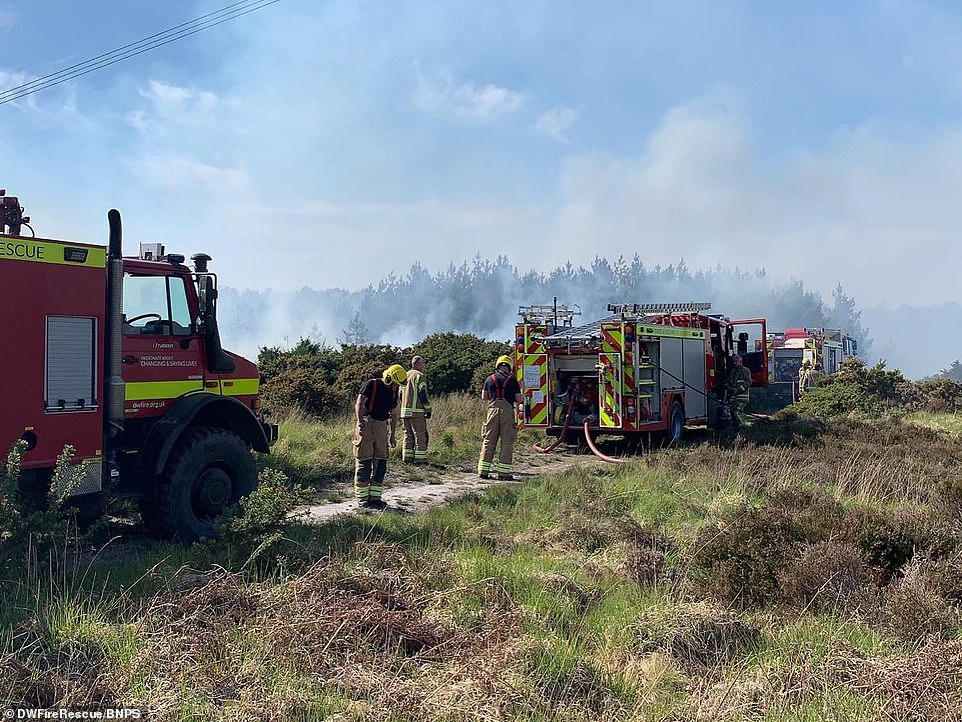 Forestry England, which manages Wareham Forest, said it could take another 30 years for the habitat to recover

But he added: ‘Overall there was very little reptile activity. Reptiles generally can’t escape fire, they try to outrun it or go underground but most of them would asphyxiate.

‘The fire incident itself is still open and there are multiple hot spots and small flare ups. With no significant rain forecast and winds potentially picking up today and tomorrow the situation is by no means finished.

‘For that reason reptile rescue efforts will continue to be on a relatively small scale.

‘There are all six species of British reptile at Wareham Forest as well as all the protected species of bird.

‘This is definitely going to have a hugely devastating impact for wildlife, it couldn’t be any worse really.

‘We believe that is the biggest fire in Dorset for 30 years.’

Forestry England, which manages Wareham Forest, said it could take another 30 years for the habitat to recover. 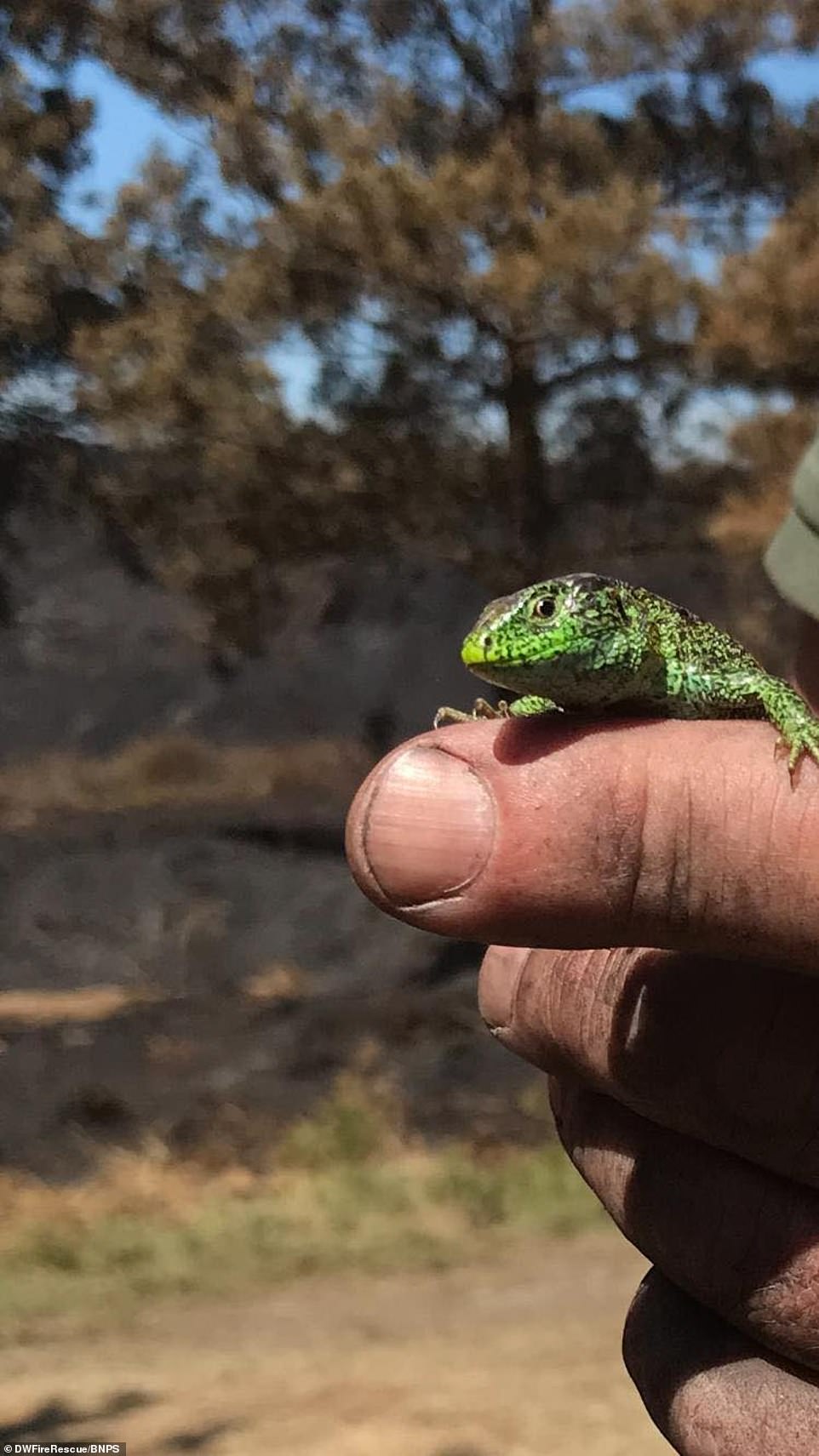 Ranger Mark Warner said: ‘A lot of the animals survived and were able to get deep down into the vegetation and avoid the fire. But they are now coming up onto a completely black moonscape and they will get picked off rapidly by predators so it’s vital we get in there and are able to move those animals’

Ranger Mark Warner said: ‘A lot of the animals survived and were able to get deep down into the vegetation and avoid the fire.

‘But they are now coming up onto a completely black moonscape and they will get picked off rapidly by predators so it’s vital we get in there and are able to move those animals.

‘Wareham Forest is probably one of the most important sites in the UK for rare British reptiles.

‘It will recover but it’s a long time coming. To get back to the position we were in before the fire we’re talking about 30 years realistically.

‘But we will see improvements within a year. With only part of the habitat taken out, we have lost animals but we have the ability for other animals to move into the area.’

They are urging the public to stay away from Wareham Forest as hot spots are still being dampened down.

And have also warned people visiting any woodland not to use fire of any kind. 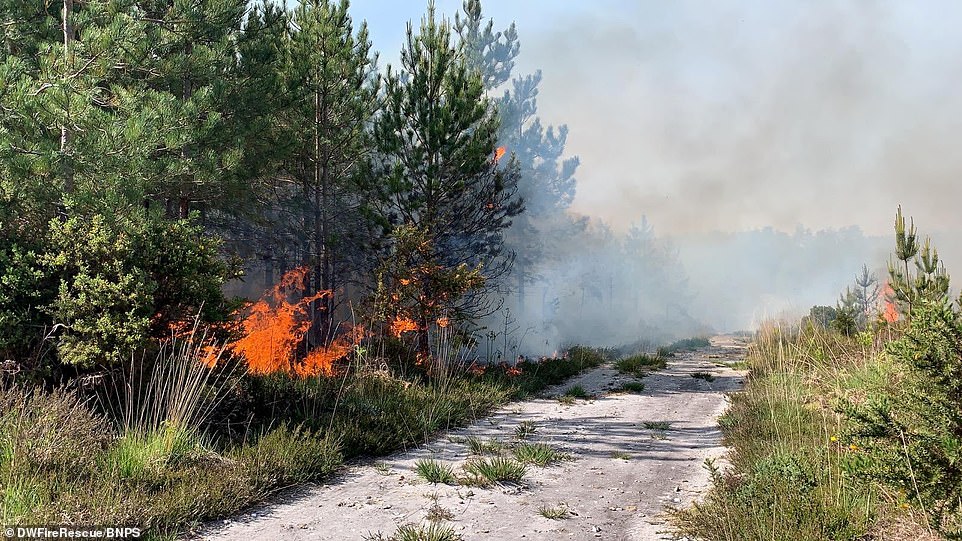 Graham Nottage, Dorset Forester for Forestry England, said: ‘The devastating fire at Wareham Forest this week has shown just how high the fire risk is right now. We need the public’s help to protect our forests’

‘We need the public’s help to protect our forests.

‘If people are planning on visiting a nearby woodland, they should not use fire of any kind, including disposable or portable BBQs, and safely extinguish cigarettes.

The fire service have received another amber wildfire alert – meaning there is an increased risk of wildfires with the dry winds, low humidity and dry heathland vegetation – for the bank holiday weekend.

And an online petition has since been started calling for a ban of disposable barbecues in the county, which has lots of important heathland. 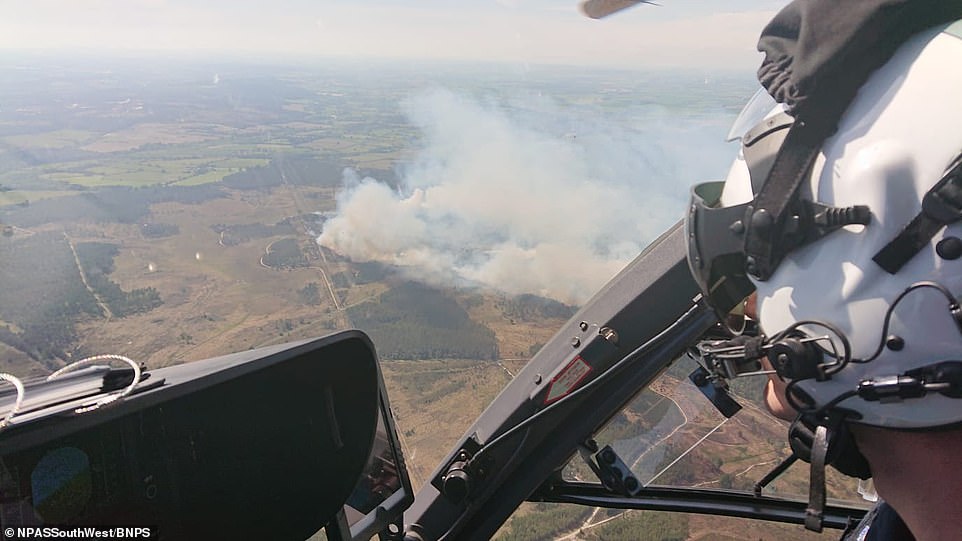