The famous ‘God letter’ written by hand by Albert Einstein the year before he died sold for three times its expected amount on Tuesday in New York City.

The ‘God letter,’ which only became known as such in 2008, went for $2,892,500 including the buyer’s premium to an unnamed purchaser, after being expected to sell for between $1-$1.5 million at Christie’s in Manhattan.

Einstein penned the letter to religious philosopher Erik Gutkind in 1954 as a critical response to his book that by account challenged ‘a disillusioned generation to “prepare the world for the Kingdom of God.”‘

In it, Einstein referred to religion, and Judaism specifically, as ‘childish superstition’ born out of ‘human weakness.’ 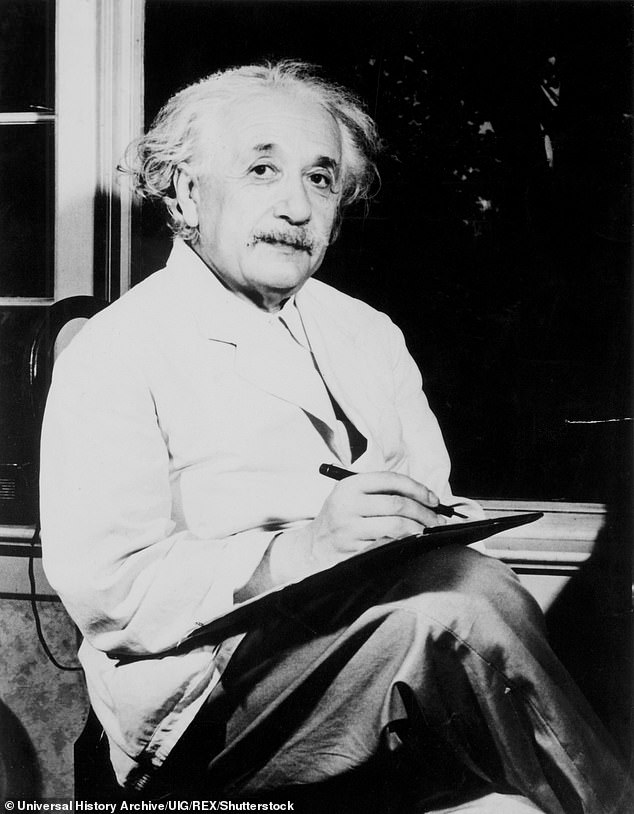 The famous ‘God letter’ written by hand by Albert Einstein the year before he died sold for went for $2,892,500 at auction on Tuesday in New York City

The letter was written in German by the famed scientist, in the year leading up to his death on April 18, 1955.

He wrote it in response to Gutkind’s 1952 book, ‘Choose Life: the Biblical Call to Revolt.’

Though Einstein was born into a Jewish family in Germany, he notedly lost his faith at a young age.

At times throughout his life, Einstein went so far as to refer to himself as agnostic, which is defined as ‘believing that nothing is known or can be known of the existence or nature of God or of anything beyond material phenomena.’

Another way of putting it, according to Dictionary.com, is believing that ‘human knowledge is limited to experience.’

In the letter, translated and transcribed by Christie’s, he writes:

‘The word God is for me nothing more than the expression and product of human weakness, the Bible a collection of honorable, but still purely primitive, legends which are nevertheless pretty childish.’

He adds: ‘No interpretation, no matter how subtle, can (for me) change anything about this.’

The ‘God letter,’ which only became known as such in 2008, was expected to sell for between $1-$1.5 million at Christie’s in Manhattan 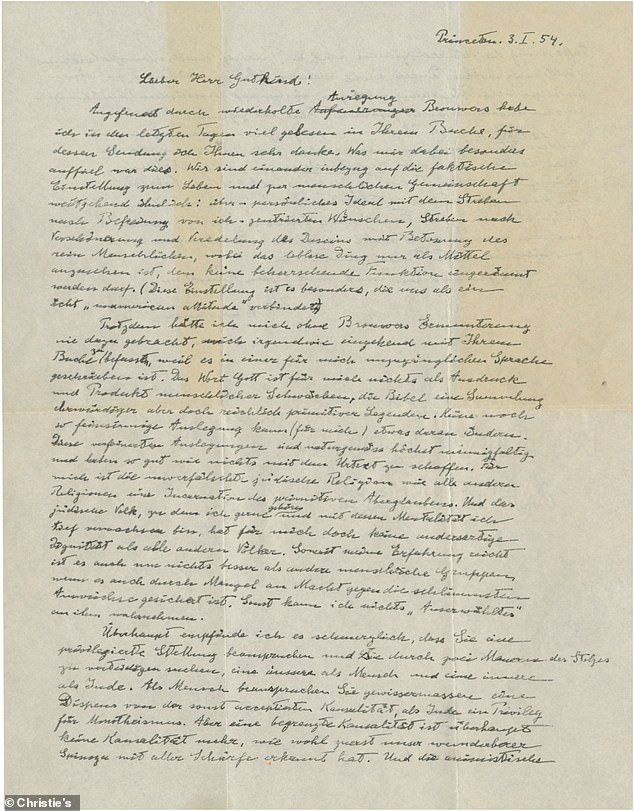 In the letter written in German, Einstein called religion in general, and especially Judaism, ‘childish superstition’ born of ‘human weakness’

The passage quoted above is the only time in the page-and-a-half document that Einstein uses the word, ‘God,’ in his parsing of religion in general, his Jewish heritage and his personal views on the meaning of life.

While the scientist continued to identify as Jewish throughout his life, he was critical of the faith, and the ‘God letter’ gave no exception to that.

‘For me the unadulterated Jewish religion is, like all other religions, an incarnation of primitive superstition,’ he wrote.

‘And the Jewish people to whom I gladly belong, and in whose mentality I feel profoundly anchored, still for me does not have any different kind of dignity from all other peoples. As far as my experience goes, they are in fact no better than other human groups, even if they are protected from the worst excesses by a lack of power. Otherwise I cannot perceive anything “chosen” about them.’

Gutkind’s book, however, had made the case that ‘the Jewish soul is perfect intellectually as well as spiritually,’ according to a review written in August of 1952 by Commentary Magazine, which was later published online.

And while Einstein took issue with that idea, he noted in the letter that he and Gutkind shared common views ‘with regard to the factual attitude to life and to the human community.’

To this day, Christie’s has described the so-called ‘God letter’ as remaining ‘a definitive statement in the on-going debate between religion and science.’

The letter first became known to the public in 2008, according to the New York Times, when it was sold at auction in London for $404,000 after having been in the hands of Gutkind’s heirs, following his death in 1965.

It was at that time that it became known as the ‘God letter.’

It was listed for sale on eBay in 2012 for $3 million, though the results of that sale aren’t known.