Australia's Chief of Army, Richard Burr, has vowed to act on allegations of war crimes involving the nation's special forces, saying they are "extremely serious and deeply troubling" and at odds with "who we aspire to be".

Lieutenant General Burr is the most senior military official to comment on the landmark Brereton inquiry into war crimes in Afghanistan which is due to report within weeks, and he has vowed in an email to all army officers, soldiers and employees to enact reforms in response. 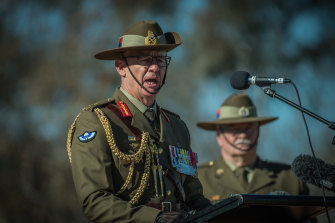 Lieutenant General Rick Burr at the ceremony to install him as Chief of Army.Credit:Karleen Minney

"We will act on the findings when they are presented to the Chief of the Defence Force," General Burr said in the internal email, obtained by The Age and The Sydney Morning Herald. "We all have a role to build on the actions we have already taken to address shortcomings that our social research programs and reforms have identified. This is what we do."

The release of the email comes a week after news that the inquiry had uncovered the actions of a rogue squad of SAS soldiers who allegedly murdered multiple bound or defenceless Afghan detainees.

The four-year inquiry by senior judge Paul Brereton is underpinned by detailed confessions by Commando and Special Air Service Regiment soldiers who have admitted that they participated in or covered up the execution of unarmed prisoners and defenceless Afghans. The killings breach the rules of war and Australia's criminal code.

General Burr’s email gives the first indication of the defence force’s public response to the Brereton inquiry report, which defence sources anticipate will be released in part to the public.

Senior defence officials have said in private briefings that they are concerned some of the soldiers accused of war crimes will attempt to denigrate the inquiry by claiming it is not independent.

In his email, General Burr emphasises the Brereton inquiry "is independent from … the ADF chain of command to ensure its integrity" as it probes "alleged unlawful killings of people who were non-combatants or were no longer combatants and also cruel treatment of such people".

"My task is to lead the army and act on the findings once we receive the inquiry report. I do not yet know the character and scale of these actions. They may be significant."

General Burr's comments are almost certain to have been partly written to combat an anticipated public relations campaign by some of the accused soldiers who may seek to claim that the inquiry has been influenced by the military top brass or politicians.

Justice Brereton is a senior judge from the NSW court of appeal who, as war crimes inquiry chief, acts under the auspices of the independent Inspector-General of the Australian Defence Force. In this role, he retains his judicial independence.

General Burr also stressed in his email that defence is committed to providing mental health support to those impacted by the report.

"As we wait for the report, I remain concerned about the impact on those of you who served in Afghanistan and other operations with integrity; reflective of who we are and what we stand for. Please continue to look out for each other and understand your service and commitment is appreciated. It's important that we support each other and get through this together. Telling our story to each other, and family, helps keep perspective and shares challenges."

Justice Brereton is expected to send several war crimes referrals to the Australian Federal Police, sparking new police investigations in a move likely to require the AFP to dramatically boost the resourcing of its existing war crimes investigation teams.

Those teams have been conducting two war crimes investigations since June 2018 into Victoria Cross recipient Ben Roberts-Smith after referrals by now former defence chief Mark Binskin. Mr Roberts-Smith denies all wrongdoing and is suing Nine Entertainment Co, the owner of this masthead, for publishing allegations that he is a war criminal, a key target of the Brereton inquiry, and that he punched a woman in a domestic violence incident.

In March 2020, the senior army officer in charge of Australia's special forces, Major-General Adam Findlay, delivered a private briefing to his troops in which he admitted some elite soldiers had committed war crimes which might have been covered up, and that Australia's special forces would take a decade to recover from the long-running investigation. He blamed the atrocities on "poor moral leadership".