Jakarta: Indonesia's third president, Bacharuddin Jusuf Habibie, who was the first person to lead the country after 32 years of the Soeharto dictatorship, has died.

He was 83 years old. The family of the former engineer-turned-politician confirmed his death on Wednesday evening. 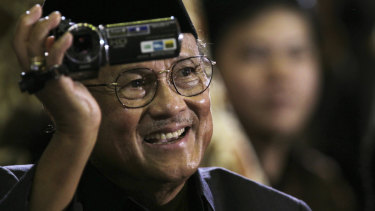 Though he served as president for only 16 months, Habibie will be remembered by Indonesians most of all for pushing through democratic and economic reforms (during the Asian Financial Crisis) and the flowering of a free press after the long years of Soeharto's autocratic rule at the dawn of the reformasi era.

He will also be remembered in Australia and around the world for allowing East Timor to hold an independence referendum on August 30, 1999 – a move opposed by influential sections of the military establishment – and which surprised the then-Howard government, which had initially urged the restive province be granted autonomy rather than full independence.

The vote resulted in 78.5 per cent of the population choosing independence and as recently as two weeks ago, as the tiny nation marked the 20th anniversary of its independence vote, a bridge named after the former president was unveiled in the capital of Dili.

His government's failure to rein in the militias that wrought havoc after the vote and killed an estimated 1500 Timorese (another 500,000 were displaced) reflected his precarious position in Indonesia's post-Soeharto political and military firmament.

Habibie's mostly-unpopular presidency was the shortest in modern Indonesia's history, but was transformative for a nation that 20 years later, relishes its status as the world's largest Muslim-majority democracy.

Habibie was tapped to lead Indonesia by Soeharto as the military dictator's 32-year hold on power crumbled in May 1998 during a student uprising and a devastating economic crash. 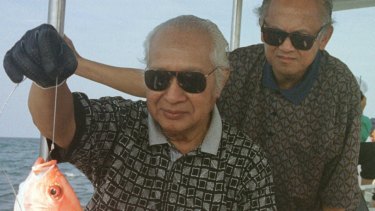 He had served as vice-president to Soeharto for just two months before becoming president and his term ended after only 16 months in October 1999 when he withdrew from contention in presidential elections.

Habibie lived in Germany and Holland for more than a decade in the 1960s and 70s, earning a doctorate in engineering and working for aerospace firm Messerschmitt-Boelkow- Blohm. He earned a number of patents in that time.

But in 1974 Soeharto asked Habibie – the pair had known each for more than two decades – to return to Indonesia and assist in the economic modernisation of the country.

He served in a number of senior roles within state-owned enterprises and in ministerial positions before eventually rising to the post of president.

As president, Habibie apologised for past human rights abuses and outlined an eight-point reform program "to build a just, open and democratic society."

He ordered the release of political prisoners, dismantled restrictions on the press and reformed politics to allow for free elections.

He lifted a three-decade-old ban on the speaking and teaching of Mandarin as part of an easing of discriminatory policies against ethnic Chinese that was instituted by Soeharto after his anti-communist pogroms of 1965-66. 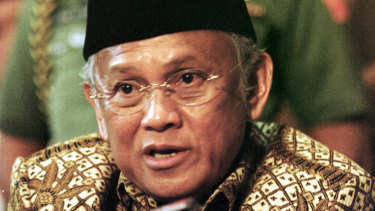 B.J. Habibie announcing that he was withdrawing from 1999 presidential election.Credit:AP

Despite his reforms, Habibie was unable to master the political tumult unleashed by the student uprising.

A failure to prosecute a longtime friend over allegations of massive corruption undermined his campaign to stay in power. On October 20, 1999, Habibie withdrew from upcoming presidential elections.

Parliament was already moving to elect a new head of state after lawmakers rejected his "accountability" speech on the successes and failures of his months in office.

Born June 25, 1936, in the South Sulawesi town of Parepare, Habibie was the fourth of eight siblings.

His father was of native Sulawesi descent and his mother a Javanese noblewoman from the ancient sultanate of Yogyakarta. His wife, Hasri Ainun Habibie, a medical doctor, died in 2010.