London: Boris Johnson promises to break free from EU rules and regulations in the new year as he declares it is "up to us now to seize the opportunities" of Brexit.

The British Prime Minister said that "big" changes were coming as he seeks to use the country's new "legislative and regulatory freedoms to deliver for people who felt left behind".

Johnson said a "great government effort has gone into compiling" post-Brexit policies as he listed animal welfare, data and chemicals as areas where the UK could diverge from Brussels, in addition to plans for low tax "freeports" and abolishing the tampon tax. 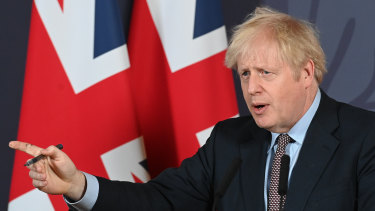 In his first interview since signing the trade deal with Brussels on Christmas Eve, Johnson also hinted at a potential overhaul of the tax and regulatory environment for businesses. He said Rishi Sunak, the Chancellor, was now conducting a "big exercise on all of this", suggesting changes could come as early as the Budget in March.

Johnson faced a battle to convince fishermen he had taken back control of UK waters after the head of the main industry body claimed they had been "sacrificed for other national objectives".

Tory Brexiteers were last night poring over the treaty ahead of a Parliamentary sitting on Wednesday to vote through the deal. Johnson sought to downplay any rebellion, saying it "would survive the toughest, most ruthless scrutiny by the scholiasts of the Star Chamber" – a reference to the group of lawyers assembled by the European Research Group of Brexiteer MPs.

The Prime Minister scotched suggestions he caved to Brussels in key areas, revealing there were "several times" when he and Lord Frost, the UK's chief Brexit negotiator, concluded "things were going in the wrong direction and that our best bet was to go for no deal".

The flashpoints included the EU seeking to retaliate automatically if the UK failed to increase its standards with the bloc over time.

Lord Frost yesterday declared the agreement was a "moment of national renewal" for Britain which "established the UK as a country which sets its own laws again".

Critics of the deal have suggested it provides the EU with the ability to impose tariffs and erect trade barriers to key industries such as car manufacturing, in order to prevent the UK diverging too far from its rules and standards. But Johnson rubbished the claims, arguing that he has triumphed over the belief that "you couldn't do free trade with the EU without being drawn into their regulatory or legislative orbit".

The Prime Minister signals he would be ready to rip up the agreement should Brussels "regularly" attempt to take retaliatory action, stating that the "treaty makes it explicit" that the UK can revert to World Trade Organisation terms.Johnson declares: "We can't sort of suddenly decide that we're free and then not decide how to exercise it. This Government has a very clear agenda to use this moment to unite and level up and to spread opportunity across the country. That's what we want to do."

Pressed on whether he believed the UK could defy predictions that Brexit will slow economic growth,Johnson said "freedom is what you make of it". He added that the deal "does present considerable advantages", but conceded that the country faced a "very big challenge now with [Covid-19]."