Nightmare Battle to Save Planes

A 120m.p.h. hurricane, which battered Australia's Polar base at Mawson, has disrupted the planned programme of scientific research and coastal exploration. 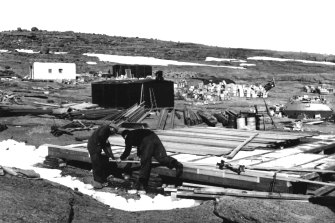 Two Beaver aircraft, valued at £100,000, were destroyed when the hurricane struck the icefield airstrip where they were moored with strong cables.

Messages from Mawson base yesterday told of a nightmare battle by several expedition members to save the aircraft as they broke loose and were tossed about at the mercy of the howling storm.

No casualties have been reported at the base.

Members of their expedition risked their lives to drive a Weasel vehicle to the airstrip situated on a plateau 500 feet above the base.

One member of the party, Squadron Leader James Sandercock, climbed into one sliding aircraft, started the engine and held its nose into the wind for more than two hours until a second relief team arrived.

In a temporary lull, the seven men at the airstrip sheltered in a sledge caravan.

There the message said, the men kept watch for “17 depressing and alarming hours" for fear they would break loose.

A radio report to Melbourne last night said the wind had abated, but snow was still falling steadily.

All men were now back at the base.

The officer in charge of Mawson base, Mr John Bechervaise last night praised every man at Mawson, who had "risen magnificently to take the strains of disaster and done all that was humanly possible to limit Its effect.”

The director of the Antarctic division of the Department of External Affairs (Mr. P. G. Law) said that as a result of the hurricane, the proposed programme of air photography over more than 1000 miles of Antarctic coastline would have to be cancelled.

Plans for surveys and photomapping in the Prince Charles Mountains, scheduled for next month would be postponed.

In a graphic account of the hurricane, Mr. Bechervaise said the storm struck without warning on Monday, with "appalling destructive force."

The message said: "Winds at Mawson were moderate when a party started out by Weasel for routine inspection and maintenance of aircraft based on the plateau.

"Unfortunately, this vehicle broke through an encrusted channel in the ice and was delayed. When it reached the airfield at 11.30 a.m., winds were 80m.p.h. and Beaver aircraft 201 had snapped its three-ton tie-wires and wing-tip fasteners, and broken loose.

"Without thought of personal safety, Squadron-Leader James Sandercock climbed into the sliding aircraft, started the engine and put its nose into the wind.

"The wind Increased and Beaver 203 broke loose by tearing out the heavy deadmen-railway sleepers sunk to a depth of two feet In the ice.

"Quick thinking set McIntyre and Bell charging after the aircraft In the D4 tractor used for power generation.

"They dropped the dozer blade on the anchor and further secured the aircraft with 7 ½ -ton steel cables and wing – tip ropes.

"At this stage, help for Sandercock, sometimes airborne above a steep ice-slope leading down to coastal ice cliffs, was urgent.

"Bell drove the Weasel down to the station for relief. A second D4 tractor, driven by Armstrong, broke through a bridged channel and was delayed.

"I reached the air strip with Rippon and Bell, with heavy iron stakes, cables and mauls, but our Weasel was now almost beyond control on the Ice.

"We drove as close to the front of the spinning propeller as possible, and held there by track tension. The wind was now almost 100m.p.h.

"When the tractor finally arrived with two men following on foot, Sandercock had been holding the plane for two hours.

"Further cables were attached to both aircraft, and by 2.30 p.m. the situation seemed well in hand.

"The seven men then fought their way to a sledge caravan which had been saved when its heavy iron runners had sunk into the ice.

“The hurricane then struck with its full force and a tremendous buffeting tore the securing rings from the aircraft.

"Beaver 203 snapped its cables, and slithered down a hill, bending both main planes at grotesque angles.

“By immense efforts, with the wind full of heavy fragments and grit, the plane was again secured.

"At times, both aircraft dragged their six-ton tractor anchorages over the ice.

"Aircraft 201, directly upwind from the caravan, started to break up.

"One wing collapsed in the middle, the other was wrenched off, and hurled In the air for 100 yards without touching the ice.

"The aircraft lifted itself madly in the air, and dashed itself repeatedly in a spray of Ice fragments and petrol, destroying the undercarriage and tailplanes."