Germany sees its highest number of coronavirus deaths with 266 in one day, as number of new infections also rises for a fourth day straight to 5,323

Germany has suffered a record daily increase in coronavirus deaths as 266 more people were added to the death toll today.

The latest deaths bring the total from 2,107 to 2,373, surpassing the previous record of 254 fatal cases announced on Wednesday.

Meanwhile the total number of infections jumped by 5,323, a figure which has now risen four days in a row – dampening hopes that the crisis is under control. 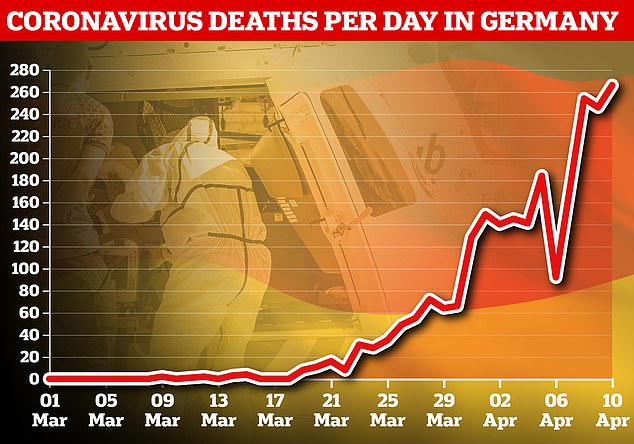 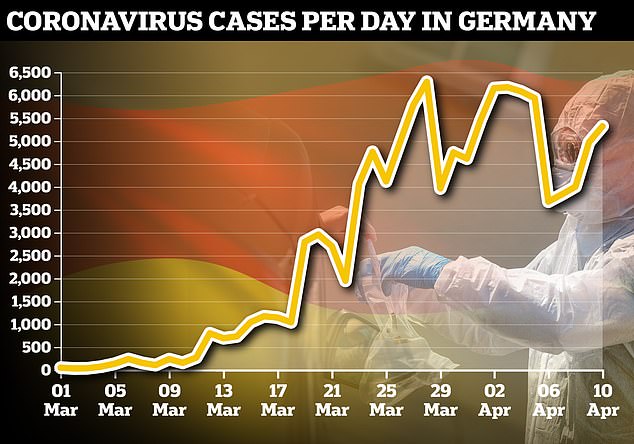 The number of cases has ticked up again in recent days after reaching a two-week low on Monday. Another 5,323 cases were recorded in the last 24 hours

Germany’s mortality rate is now 2.1 per cent, meaning that one in 48 confirmed cases have resulted in death.

The low figure is thought to be linked to mass testing, meaning that many people with mild symptoms are counted in Germany but not elsewhere.

However, the rate has been rising steadily, from 0.6 per cent a fortnight ago to 1.3 per cent last week and 2.1 per cent today.

Of the 266 new deaths, nearly half were in the two southern states of Bavaria and Baden-Wuerttemberg which are closest to Italy and have been hardest hit.

There were also another 62 deaths in the industrial centre of North Rhine-Westphalia, where Germany had its first major outbreak.

Berlin has recorded more than 4,300 cases with 42 deaths, of which five were added to the tally in the last 24 hours.

The former East has generally been less affected. German media has suggested this could be linked to a lower population density and a less developed economy which makes encounters between global jet-setters less likely. 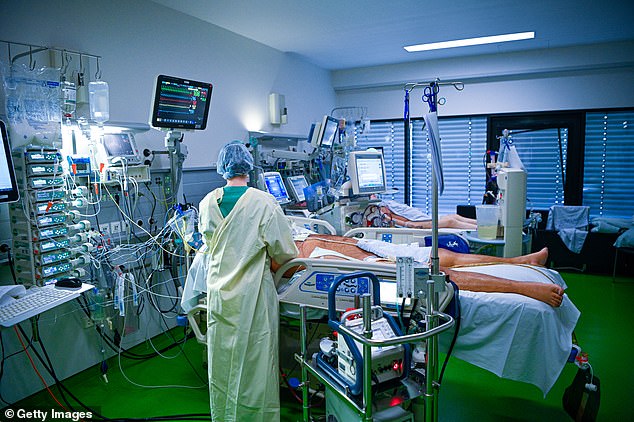 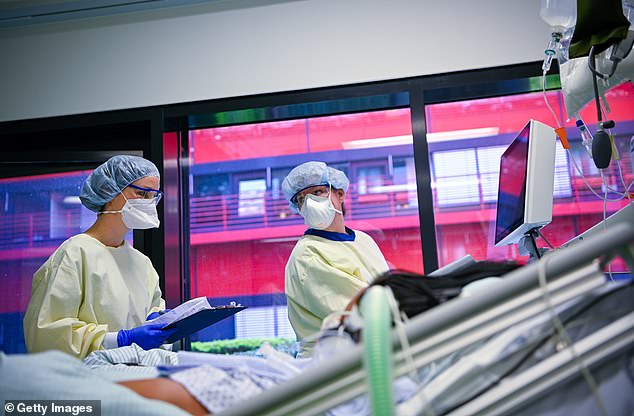 The rising number of cases, after the daily count had fallen to a two-week low on Monday, is setback to German hopes of ending the lockdown.

Neighbouring Austria has already unveiled plans to re-open some shops next week and larger ones on May 1.

However, German chancellor Angela Merkel has called for ‘patience’ despite a voicing ‘cautious optimism’ over the spread of the epidemic.

Restrictions would only be lifted ‘slowly’, she said, with their effectiveness reviewed on a ‘two to three week basis’.

‘I don’t want to take such a big step that it throws us back completely and we find ourselves once again with an exponential rise,’ she said.

The restrictions including a ban on gatherings of more than two people are currently in place until April 19.

The federal government in Berlin and the 16 state governments are set to review the measures next week.

Merkel that Germany could be ‘happy’ that it had avoided more stringent measures such as those in France, Spain or Italy, but warned that the situation was still ‘fragile’.

Earlier on Thursday, health minister Jens Spahn similarly warned that any relaxations would happen ‘step by step, if at all’.

The Easter weekend would be a ‘fork in the road’ on the return to normal circumstances, he added. 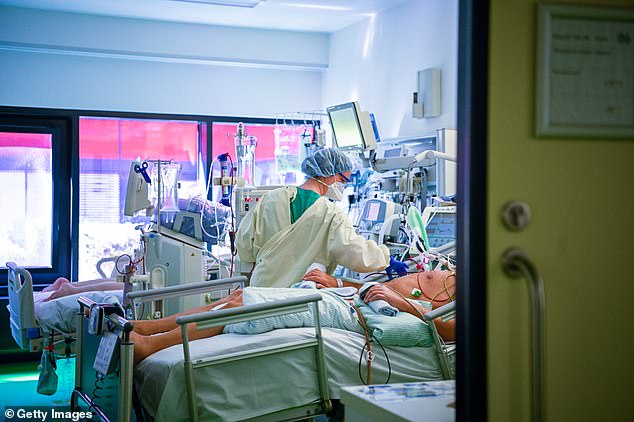 A medical worker attends to a coronavirus patient in Aachen yesterday. Germany recorded a record 266 deaths in the last 24 hours

Many countries have warned their citizens not to ruin their good work by spreading the virus through unnecessary Easter travel.

However, Spahn noted that ‘the number of new infections is beginning to level off’ despite the fluctuating figures.

Merkel has also renewed her opposition to so-called ‘corona bonds’ or joint European borrowing, despite pleas from Italy.

Germany has long been against the idea, unwilling to take responsibility for the debts of free-spending European neighbours.

‘I spoke today with Italian PM Giuseppe Conte for a long time and we agree that there is an urgent need for solidarity in Europe, which is going through one of its most difficult hours, if not the most difficult,’ Merkel said yesterday.

‘And Germany is ready for this solidarity and committed to it. Germany’s wellbeing depends on Europe being well.

‘Now, which instruments are fit for this purpose, here there are different views. You know that I don’t believe we should have common debt because of the situation of our political union and that’s why we reject this.

‘But there are so many ways to show solidarity and I believe we will find a good solution.’