London: A British cabinet minister has come to Tony Abbott's aid, defending the former Australian prime minister against charges of being a "homophobe and misogynist", and saying he was fit to join the British Board of Trade because he is an "expert in trade". 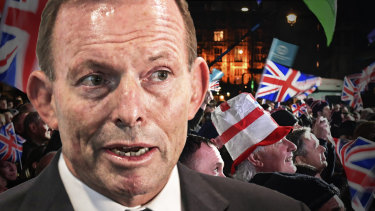 Former Australian prime minister Tony Abbott was granted an exemption from the Australian government’s international travel ban to fly to London where he has accepted a “role” spruiking British trade after Brexit.Credit:Graphics

"As the former prime minister of Australia, obviously Mr Abbott's got a huge amount of experience," Hancock said.

"Even if he's a homophobic misogynist?" asked host Kay Burley.

"I've just told you what he said, he's a homophobe and he's a misogynist," Burley said referring to comments by Abbott about women.

"So one plays off against the other; is that really what you're saying, Health Secretary? C'mon."

"Well, no, what I'm saying is we need experts in different areas and somebody who, the former prime minister of Australia is obviously an enormous expert in the area of trade. It doesn't change my views," Hancock said.

Abbott's appointment remains unconfirmed despite ongoing speculation that he will take up a position advising Britain as it negotiates trade deals after Brexit. He has described his mooted position as a "role" and not a "job". 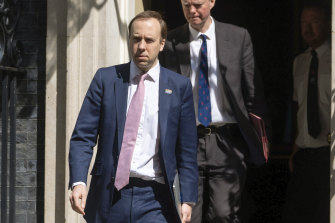 But the reports have caused a political storm in Westminster with the opposition and a prominent Conservative MP saying his record on gay marriage, women and climate change disqualified him from representing Britain on the world stage.

Scotland's First Minister Nicola Sturgeon, of the centre-left Scottish National Party, said Abbott's views on climate, women and gays were relevant to trade and even a potential hindrance.

"I think having somebody with those views representing the UK probably doesn't help us boost trade and it might actually hinder that," Sturgeon said. 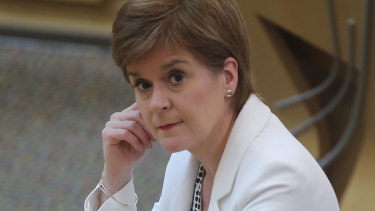 Britain is negotiating a trade deal with Australia, prompting Abbott's critics in Australia to question whose side he will be batting for as that deal is thrashed out.

The matter was raised in the Commons on Thursday morning with Junior Trade Minister Greg Hands questioned about Abbott's comments that trade deals Australia negotiated when he was leader were not sidetracked by climate issues.

"No appointments have been confirmed but personally I welcome the fact that a former prime minister of Australia is willing to help this country out. I think we should welcome his interests and welcome the endeavours that he has potential to make for this country on all our behalves."

Abbott has brushed off the criticism, saying his “convictions” inevitably draw criticism.

He says he is free to enter Britain on his diplomatic passport which former prime ministers are awarded for life.

Abbott said he would end his 10-day tour of Europe, which has included attending a golf tournament in Wales, a trip to Italy, meetings with British Trade Secretary Liz Truss and Home Affairs Minister Priti Patel, by paying for his own hotel quarantine in Australia.

Abbott said his exemption from the ban on Australians travelling was obtained "in the normal way".

The most important news, analysis and insights delivered to your inbox at the start and end of each day. Sign up to The Sydney Morning Herald’s newsletter here, to The Age’s newsletter here and Brisbane Times‘ here.