New cameras in the war on tailgating: Highways England trials roadside technology on the M1 to catch motorists driving too close to the car in front

New roadside cameras will be trialled across England to catch tailgaters on motorways.

Highways England is trialling the new technology on the M1 in Northamptonshire before it launches it across the country if successful.

As many as 26,000 tailgating cars, vans, trucks and buses have been identified in the first two months of the trial, equivalent to 419 a day.

Any vehicle that deliberately flouts the Highway Code’s two-second minimum gap is deemed to be tailgating in the new system.

Working in partnership with the police, drivers spotted tailgating by the cameras will receive a warning letter in the post.

The organisation is not looking to prosecute drivers but instead wants to reinforce the message to leave a gap between vehicles.

Highways England’s Head of Road Safety Jeremy Philips said the cameras are there to ‘make drivers aware of their behaviour and encourage better driving’.

He said: ‘These new cameras have, sadly, highlighted just how many people are driving too close on our roads.

‘We understand that most tailgating is unintentional by drivers who are simply unaware they are dangerously invading someone else’s space. 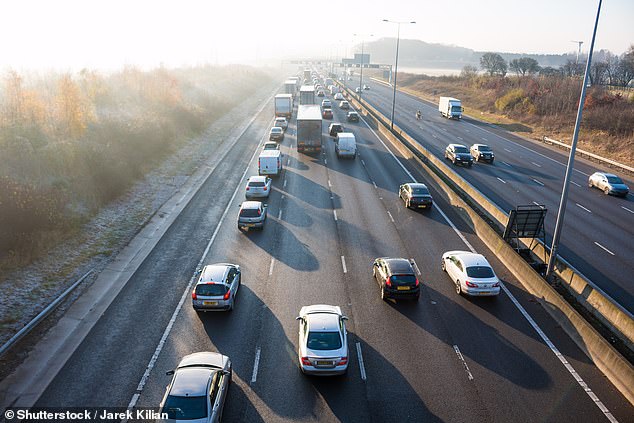 As many as 26,000 tailgating cars, vans, trucks and buses have been identified in the first two months of the trial, equivalent to 419 a day. Pictured: A traffic jam on the M1

‘But not leaving enough space between you and the vehicle in front can be very frightening and intimidating — it could also prove fatal.’

Of the 26,000 tailgaters spotted from early October to the first week of December, 3,700 were repeat offenders.

The worst drivers were seen tailgating as many as 12 times on the same 164 yard (150m) stretch of road the cameras have been installed on.

The cameras developed by Aecom operate in a similar way to speed cameras by identifying number plates.

They are deployed in unison to take readings of drivers’ distance-keeping to determine whether they are deliberately or accidentally tailgating.

Highways England is currently analysing whether its system of sending letters to tailgaters is leading to a change in driving behaviour.

Highways England said: ‘Tailgating is a factor in one in eight casualties on the strategic road network.’

Serious crashes caused by tailgating drivers have jumped to their highest level for at least seven years, according to new Department for Transport data.

Concerns have raised in particular about HGVs tailgating on stretches of motorway with roadworks, where the speed limit is reduced to 50 or 60mph.

Data and intelligence analyst for Highways England Caroline Layton said she feared she would be crushed by a lorry tailgating her on the M27 near Southampton.

She told The Times: ‘He came up really close, just a couple of metres behind.

‘I thought I had to slow down because if it hit me at 50mph I would be crushed. This was very intimidating behaviour and likely to cause a crash and serious injury.

‘If anyone had stopped in front of me, he would have gone into the back of my car and I would have been sandwiched in the middle.’