MUMBAI: India, the country hardest hit in Asia by the coronavirus pandemic, is reporting a record daily jump in infections, taking its total number of cases past two million.

It is the third nation to reach that unwanted milestone, lagging behind only the United States and Brazil. 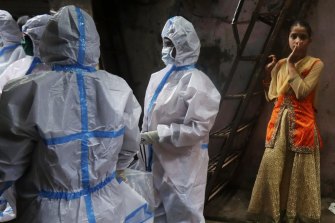 Health workers screen residents for COVID-19 symptoms at Dharavi, one of Asia’s biggest slums, in Mumbai, India, Monday, Aug. 3, 2020. India is the third hardest-hit country by the pandemic in the world after the United States and Brazil. (AP Photo/Rafiq Maqbool)Credit:AP

With infections spreading further to smaller towns and rural areas, experts say the epidemic in India is likely to be months away from hitting its peak, putting more strain on an already overburdened healthcare system.

And authorities are having to deal with multiple outbreaks across a nation of 1.3 billion people.

"A country of India's size and diversity has multiple epidemics in different phases," said Rajib Dasgupta, head of the Centre of Social Medicine and Community Health at the Jawaharlal Nehru University in New Delhi.

The health ministry said on Friday there were 62,538 new infections, taking the country's total to 2.03 million.

India has been posting an average of around 50,000 new cases a day since mid-June, but experts say its testing rate at 16,035 per million people is far too low.

Still, the government has taken some solace from the relatively low death rate, at about 2 per cent, with 41,585 deaths so far, though that figure will be understated as only deaths of people who have been tested for the virus are counted.

Epidemiologists say the epidemic in India is likely to be months away from hitting its peak, which will put an already overburdened healthcare system under more strain.

Meanwhile, the Phillipines recorded another jump in coronavirus cases to overtake neighbouring Indonesia as the country with the highest number of confirmed COVID-19 infections in the eastern part of Asia.

A recent surge in cases of the virus in and around the capital Manila has pushed authorities to reimpose a lockdown affecting around a quarter of the country's 107 million people.

The Philippines recorded 3561 new infections on Thursday, taking its total confirmed cases to 119,460. That is higher than Indonesia's 118,753 infection cases, although experts believe that the number of cases could be 10 times higher in Indonesia.

President Rodrigo Duterte announced late on Sunday a two-week lockdown in and around Manila, which accounts for two-thirds of the country's economic output.

Get our Coronavirus Update newsletter for the day’s crucial developments and the numbers you need to know. Sign up to The Sydney Morning Herald’s newsletter here and The Age’s here.