Is Gary Lineker’s playboy brother the most deluded dater on the web? He’s 58 with two marriages, four children and serial flings behind him – and he’s caused uproar by advertising for a hot young girlfriend to meet his exacting criteria, says REBECCA HARDY

For a 58-year-old bloke who seems to have enraged thousands of women this week, Wayne Lineker is pretty unrepentant. ‘Would I ever go out with someone my age? Never say never. But no,’ he says.

He is, of course, referring to the astonishing list of criteria for a girlfriend the millionaire club owner, playboy and younger brother of soccer pundit Gary Lineker posted on Instagram this week with the hashtag #wifeywhereyouat.

As well as his prospective lover having to be a ‘worldie’ (ladspeak for extremely attractive) and considerably younger than him, the wishlist included being ‘prepared to give up your career or job’, ‘able to cook’, and, bizarrely, know where the city of Lincoln is.

The post soon sparked outrage on social media as Wayne, who has been single for two years since separating from his 27-year-old model girlfriend Danielle Sandhu, was branded a ‘creep’ and ‘an embarrassment’. 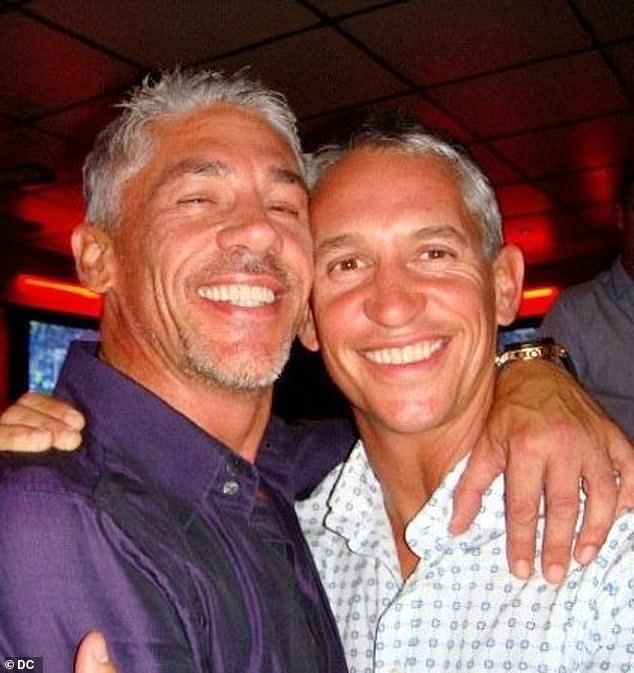 So, my family have decided I need a girlfriend for my own sanity and health . . . so here’s my criteria . . .

You must like older men but only me . . . You have to be a worldie and above 30 (Ok 28, 29 could work) but not my age as that would just look weird. You must like to fly business class and stay in incredible hotels. Be prepared to give up your career or job or at least be able to work from a laptop on a tropical beach somewhere. You will need to spend the summer in Ibiza and the winter in Dubai . . . and holidays to the Maldives . . . You must be able to cook as I love cooking, especially Waitrose ready-made meals . . . No chick flicks, watch them with your mates . . . You will need a driving licence to share a Bentley and a Lamborghini Jeep (pending) . . . You must love the gym, health food and have body definition as I will have soon. Accept and love my children and grandchildren and realise no more kids for me . . . (never say never though) you must be able to let my PA book all . . . flights and purchase items online for you . . . You must be able to accept my friends . . . as I will accept yours . . . accept I have to reply to girls DMs [social media messages] not just guys . . .

One last thing. Your geography needs to be on point as girls that think Lincoln is in Wales is not good. Be intelligent but not boring. Outgoing suits #wifeywhereyouat #justbanter

‘People must have realised I was having a laugh,’ he says. ‘I’m a fantastic boyfriend. I’m 100 per cent dedicated to the partner I’m with. I never cheat on them. I make sure they’re treated like a princess.

‘I wake them up with a cup of tea. I put them to bed after I’ve made them hot chocolate. I’ll wrap them up in a towel when they get out of the bath or shower. I do all the things I feel they’d like as somebody who’s in love with them.’

It seems that Wayne, the silver-haired Peter Pan of the Mediterranean’s fleshpots who has had two marriages, four children with three different women, a broken engagement and about as many flings as his brother has caps for England, finally wants to settle down.

Last month, he was filmed at his Ocean Beach Club in Ibiza, a favourite haunt of footballers and reality TV stars, picking a ‘dream doll’ to take on a date from a line-up of women in orange swimsuits. Rejects were pushed into the swimming pool.

‘I don’t party when I’m in a relationship. I do what normal couples do. We go out for dinner or watch TV and cook at home. I can’t do that on my own, which is why I go out so much. What else am I going to do? Stay in and watch Loose Women?’

As if on cue, a group of lads in high spirits and wearing girls’ bikini tops gather round Wayne for a selfie.

With a portfolio of bars and venues believed to be worth £30 million across Europe — including in Puerto Banus, Zante, Tenerife and Ibiza — Wayne is to the club scene what his brother is to the world of football.

‘My party days are done now,’ he says. ‘I’m ready to settle down . . . hopefully, with the one I’ll be with for the rest of my life. I’d like a girl to be funny and have some form of intelligence so they can hold a conversation.

‘I can’t stand it when girls don’t know where cities are in their own country. I don’t get it. It’s like they never leave their hometown.

‘I’m not pretending to be the most intelligent guy in the world, because I’m definitely not, but it does baffle me when they don’t even know where certain cities are in the British Isles.’

Now, Wayne is a decent looking man for 58, who eats healthily and works out in the gym, but why would a sexy, 30-year-old woman who, as he also stipulates, ‘doesn’t want children, is funny, bright and willing to give up her career’ want to go out with you?

He roars with laughter: ‘I have absolutely no idea. She would have to be crazy to go out with me but you’ve got to try, haven’t you?’ He flashes a smile. 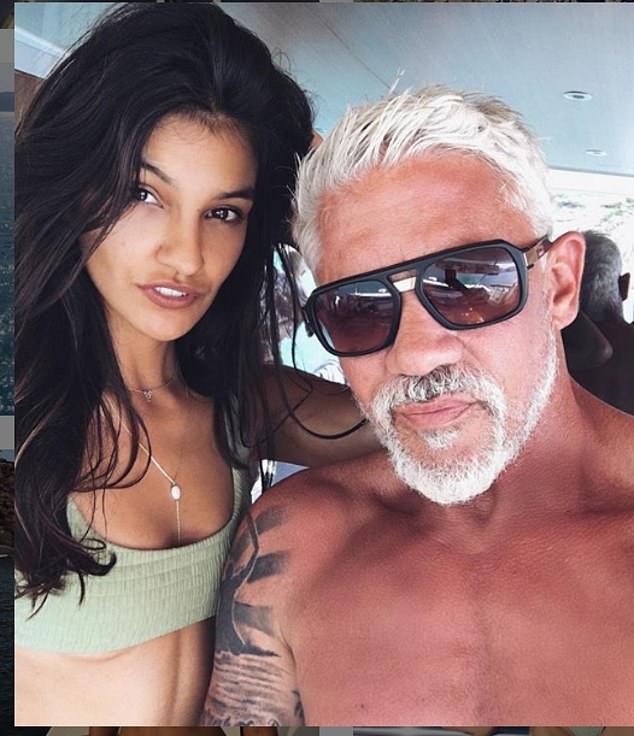 Wayne has been single for two years since separating from his 27-year-old model girlfriend Danielle Sandhu, pictured together

‘I might have hung up my boots as far as children are concerned, but it doesn’t mean I can’t get them down again,’ he says, ever the optimist.

Wayne was seven years old when he kissed his first girl.

‘It was in the wendy house at school and I can even tell you her name,’ he says. ‘Jennifer Grundy.’

Born 18 months after his brother Gary into a solid family of market traders, both boys were as thick as thieves and had trials with the local football team, Leicester City.

‘I had more skill than Gary but he had the dedication, commitment and determination,’ he says. ‘I never had any of those things — just skill and a wish to go out with my mates.

‘I was at Leicester City football club at 14 when I decided to pack in football. I had to go training after school and it wasn’t my bag,’ he says.

Wayne packed in school, too, to work on the fruit and veg market stall with his father Barry. Within a year, he had his own business and was employing 40 people at 16.

Not that he harbours any jealousy over his brother’s glittering football career and punditry which made him the BBC’s highest earning star.

‘I was the proudest man alive of my brother. I still am very proud of him. I was his number one fan and still am.’

Wayne set up his first bar in Tenerife in 1986, the same year Gary won the Golden Boot at the World Cup. At the time, Wayne was married to his first wife Debbie and had already had two sons, Duane and Sean.

‘I married young at 21,’ he says. ‘Supermarkets were ending the market game so I thought: ‘What can I do?’ Debbie’s parents lived in Tenerife so I thought: ‘I’ll open a bar and I’ll call it Linekers.’

He grins. ‘That was the best thing I ever did.’

His first marriage lasted 12 years and when it ended he was awarded custody of his sons. He won’t say why the marriage broke down but he moved to England for the boys’ education and you begin to realise that, for all his tomfoolery, he is at heart a decent man. 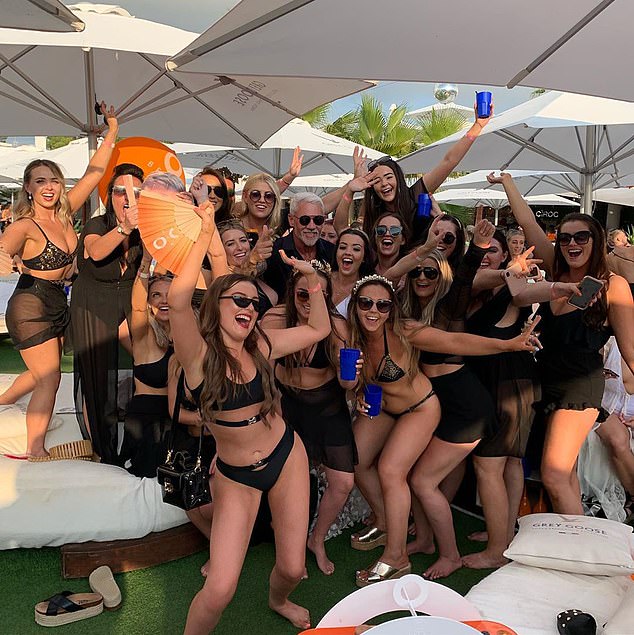 The 58-year-old, pictured middle, with friends at a party in Ibiza, is on the hunt for a girlfriend

Indeed, he takes all his children to the Maldives every year, says they are a ‘super-close family’ and remains on good terms with his previous girlfriends and wives, the second of whom, Sasha, is mother to his youngest son Freddie.

Relationships become tired, don’t they?’ he says. ‘A girl called Zoe helped me bring my children up and we had Tia together. Once they’d grown up, I parted ways with Zoe and moved back to Tenerife for a few years. Then I lived in Marbella for ten years before moving to Ibiza in 2008.

‘I stay in touch with them all. Danielle and I still WhatsApp each other every single day. I was very sad [when we separated]. She’ll be very difficult to replace. It was a mutual decision but a very tough one.

‘I like to travel and see different cultures. It’s nice to be able to share that with someone, isn’t it? I’m not really one for going away with my mates.

‘It’s not really my thing, although I go away with my friend Calum Best [George Best’s celebrity son] once a year. We normally go to Dubai.

‘I love to eat amazing food, that’s my life hobby, so we [visit] all the nice restaurants, have drinks after dinner. Do a few Instagrams and go and do the same thing.

‘I’m not super rich but I’m comfortable. I can afford to travel and like to travel business class. But Danielle was a very, very successful model who began working more and more. We hardly saw each other.

‘She couldn’t come to Ibiza which put a huge strain on our relationship and in my environment, she was wondering what I was up to. I wasn’t up to anything but, from her point of view, it was difficult we couldn’t spend summers together.’ He shakes his head.

‘I said to Danielle, ‘Obviously, if you’d had a career where you could have worked from a laptop, we wouldn’t be in this position, would we?’

‘But what is being heartbroken? I cry all the time. I cried at Finding Nemo. I cry at all the Disney movies — all romantic movies.

‘I’ve been sad but never to the point where I can’t cope with life. . . I just move on, console myself with some company and my family and I’m OK. You go on Instagram, have a look round and get busy.’

‘I mean, I say 30 but there’s no limit really. Mid-40s maybe? Like you say, someone might come along who’s my age and who I think looks amazing and everything’s fine. I don’t know, do I?’

He flashes that silver-fox smile. ‘If you ever fancy a date sometime we could go out for dinner.’