London: The father of a London Bridge terror attack victim has issued a blistering condemnation of Prime Minister Boris Johnson's election-eve pledge to crack down on convicted jihadists, saying his son would be "livid" that politicians have used his death to "perpetuate an agenda of hate".

In an extraordinary message published on Tuesday morning Australian time, David Merritt blasted the political fallout from the murder of his 25-year-old son Jack and appealed for a rational response to an increasingly fraught debate in the United Kingdom about how to sentence, rehabilitate and release dangerous offenders. 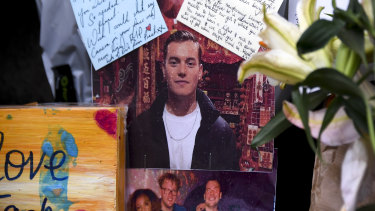 "If Jack could comment on his death – and the tragic incident on Friday – he would be livid. Jack would understand the political timing with visceral clarity," Merritt wrote. "He would be seething at his death, and his life, being used to perpetuate an agenda of hate that he gave his everything fighting against. We should never forget that."

Convicted terrorist Usman Khan stabbed Jack Merritt and 23-year-old Saskia Jones to death at a prisoner rehabilitation conference on Friday. The pair were part of Cambridge University's Learning Together program, which Khan was taking part in.

Revelations that Khan was released from prison on parole halfway through a 16-year sentence for plotting to establish a militant training camp and blow up the London Stock Exchange has triggered public anger and promoted Johnson to pledge new laws to keep terrorists in jail without the possibility of early release.

As many as 74 terrorists have been freed in circumstances similar to Khan and most are subject to monitoring and reporting obligations. 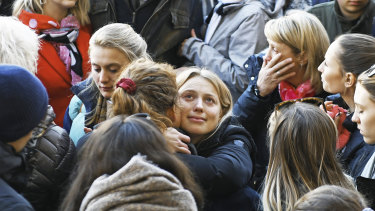 Jack Merritt’s girlfriend Leanne O’Brien is comforted at a vigil to remember the victims of the London Bridge attack.Credit:PA

Writing in The Guardian, David Merritt remembered his son as an intelligent and fiercely loyal young man who was also "angry and frustrated".

"He was angry because he saw our society failing those most in need. He was frustrated because the political elite have forgotten why it is important to be fair. Jack devoted his energy to the purpose of Learning Together: a pioneering programme to bring students from university and prisons together to share their unique perspectives on justice.

"What Jack would want from this is for all of us to walk through the door he has booted down, in his black Doc Martens. That door opens up a world where we do not lock up and throw away the key. Where we do not give indeterminate sentences, or convict people on joint enterprise. Where we do not slash prison budgets, and where we focus on rehabilitation not revenge. Where we do not consistently undermine our public services, the lifeline of our nation."

While Merritt did not explicitly name Johnson, he has tweeted or retweeted a series of posts criticising the Tory leader – as well as Labour leader Jeremy Corbyn – for using the terrorist attack as a "campaign tool" ahead of the December 12 general election. Merritt describes himself in his Twitter profile as left-leaning.

In contrast to Johnson, Corbyn has said he does not believe all terrorists should be denied parole but has repeatedly attacked the government over crime and national security in the days since Friday's incident.

Merritt finished his opinion piece by writing: "Jack believed in the inherent goodness of humanity, and felt a deep social responsibility to protect that. Borrow his intelligence, share his drive, feel his passion, burn with his anger, and extinguish hatred with his kindness. Never give up his fight."

Two convicted terrorists who were on parole have been arrested in the wake of Friday's deadly assault, which culminated in police shooting Khan dead on the footpath of the busy London Bridge.

One of the two has been named by the British press as Nazam Hussein, one of the men Khan conspired with to blow up the London Stock Exchange in 2010.

London Bridge was reopened to traffic on Monday while Corbyn, Johnson, Mayor of London Sadiq Khan and Metropolitan Police commissioner Cressida Dick attended a vigil for the victims.