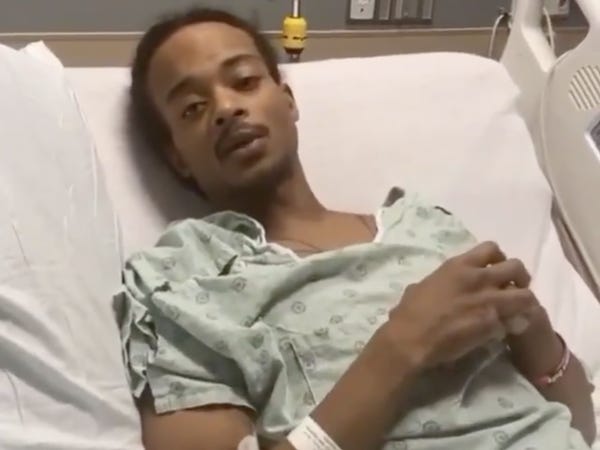 Jacob Blake, the Black man shot at least seven times in the back by police in Wisconsin, pleaded in a video from his hospital bed for his supporters to "stick together" and told them to understand that their life can end any minute.

It was one of Blake's first public appearances following his hospitalization. Civil-rights attorney Ben Crump, who is representing the family, tweeted the video out Saturday night.

Disturbing videos that circulated on social media last month showed Blake slowly walking away from police officers and attempting to get in a car. One of the officers, pointing a gun directly at Blake, can be seen extending his arm to grab Blake's T-shirt from behind. Seconds later, as Blake faces away from the officers and appears to enter the car, seven shots can be heard.

Blake, 29, had three of his kids in the car while the police shot at him, and one of them was celebrating a birthday.

Wisconsin officials and the Justice Department have begun investigating the shooting. No charges have yet been announced against Rusten Sheskey, a 31-year-old man identified as the officer who shot at Blake.

After the shooting, Blake's family said he was in stable condition but had to undergo surgery and stay in the intensive care unit. His father said Blake is paralyzed from the waist down, but doctors still haven't said whether it's permanent.

"It's a lot more life to live out here, man. Your life, and not only just your life. Your legs, something that you need to move around and move forward in life can be taken from you like this, man," Blake, lying down in his hospital bed, said into the camera.

The shooting reignited waves of protests against police brutality that began after the police killing of George Floyd, a Black man in Minneapolis.

Blake, recovering from the shooting, said he has "staples in my back, staples in my damn stomach" and he feels constant pain.

"It's nothing but pain. It hurts to breathe. It hurts to sleep. It hurts to move from side to side. It hurts to eat," Blake said. "Please, I'm telling you, change your lives out there. We can stick together, make some money, make everything easier for our people out here, man, because so much time has been wasted."