Washington: As if the House of Windsor’s internal dramas weren’t enough, the tensions inside another globally-powerful dynasty have now burst into public view.

As the son of the world's most powerful media mogul, James Murdoch is aware that even the most mild criticism of his family's media empire is guaranteed to generate headlines. 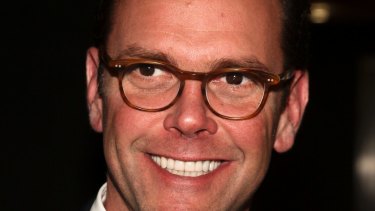 So Murdoch knew exactly what he was doing when he publicly attacked News Corporation’s climate coverage at a time when the company's reporting is under intense scrutiny.

Last week News Corp Australia commercial finance manager Emily Townsend told senior management she found it “unconscionable” to continue working for the company given she believed it had mislead readers about the cause of the bushfires sweeping across Australia.

James' intervention shows that such concerns aren't just held by some outspoken employees and left-wing critics on Twitter. They go to the very top of the Murdoch family tree. 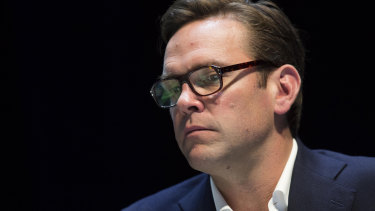 James Murdoch, the black sheep of the family.Credit:Bloomberg

"Kathryn and James’ views on climate are well established and their frustration with some of the News Corp and Fox coverage of the topic is also well known,” a spokesperson for Murdoch and his wife told The Daily Beast website in a piece published late on Tuesday Australian time.

"They are particularly disappointed with the ongoing denial among the news outlets in Australia given obvious evidence to the contrary."

The comments were a clear rebuke of James' father Rupert, who insisted at News Corp's annual general meeting in December: "There are no climate change deniers around I can assure you."

For anyone who has read the opinion pages of News Corp publications or tuned into Fox News, it was a laughable statement – and one Mudoch's second-eldest son refused to let go uncorrected.

Because of his role in the Murdoch family and the fact he is a News Corp board member, James's statement was stunning.

But its implications for the company's editorial stance should not be exaggerated.

Just as "Megxit", while a dramatic development, does not pose an existential threat to the British monarchy, neither does James's statement foreshadow an overhaul of News Corp's climate coverage.

Rather, his frustration reflects how peripheral he has become to the media empire he once seemed destined to control.

Just a few years ago, at the time of the UK phone hacking scandal, James was running News Corp's powerful British subsidiary and was the company's deputy chief operating officer. Meanwhile his older brother Lachlan was out of the family fold and was trying to go it alone as a media mogul in Australia.

Now those roles have been reversed: James is on the outer and Lachlan the favourite to take over when (or is that if?) Rupert leaves the stage.

Rupert's decision to sell 21st Century Fox, his film and television firm, to Disney last year left James without a role at the slimmed-down company.

Lachlan's politics – described as a mixture of libertarian and conservative – are far closer to his father's than James's more progressive positions. "There are views I really disagree with on Fox," James told The New Yorker last year, adding that he and his father now go for extended periods without talking.

It is Rupert and Lachlan's right-of-centre world-view that continues to dominate the company – including a resistance to ambitious carbon reduction targets and a willingness to question the orthodoxies of climate science.

For example, several recent News Corp articles highlighting the role of arsonists in causing bushfires have been used by prominent Fox News hosts to discredit the link between climate change and bushfires.

In an editorial last week The Australian said its bushfire reporting had been "wilfully and ineptly misrepresented by The New York Times and Guardian Australia as climate denial".

News Corp's papers are unlikely to attack James Murdoch for making essentially the same argument, but neither are they likely to follow his advice and become champions of climate action.

Queen Mother paved the way for younger royals with this key advice
We and our partners use cookies on this site to improve our service, perform analytics, personalize advertising, measure advertising performance, and remember website preferences.Ok