Khmer Rouge jailer who oversaw the torture and killing of 16,000 Cambodians dies aged 77 after being jailed for life

The Khmer Rouge’s chief jailer, who admitted overseeing the torture and killings of 16,000 Cambodians while running the regime’s most notorious prison, has died aged 77.

Kaing Guek Eav, known as Duch, had been serving a life prison term for war crimes and crimes against humanity having locked up and abused thousands of men, women and children seen as enemies of the regime or who disobeyed its orders.

He died at a hospital in Cambodia early Wednesday morning, said Neth Pheaktra, a spokesperson for the tribunal in Phnom Penh that handled the trials over the regime’s crimes.

The body is now to be examined for a cause of death before being handed to his family. 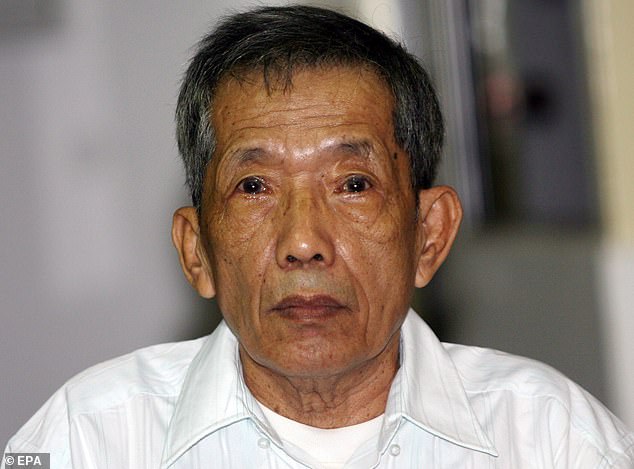 Kaing Guek Eav, known as Duch, pictured during his trial in 2009, had been serving a life prison term for war crimes and crimes against humanity 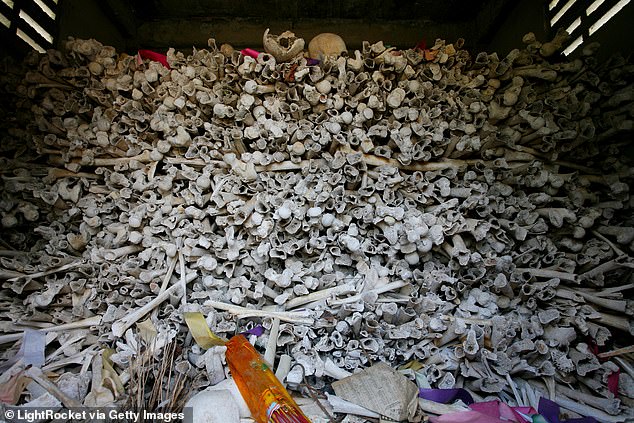 Remains of the victims of the brutal regime, responsible for the deaths of around 1.7 million people, at Kampong Ta long Village at Kandal province, pictured in 2007 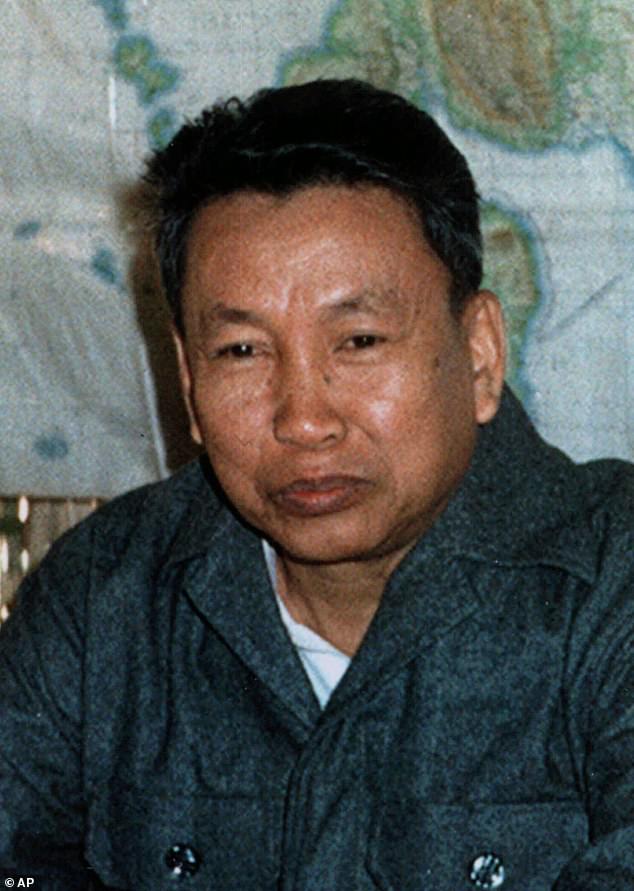 Pol Pot, pictured in 1979, was the leader of the regime blamed for the deaths of a quarter of Cambodia’s population at the time

Duch, whose trial took place in 2009, was the first senior Khmer Rouge figure to face the U.N.-backed tribunal that had been assembled to deliver justice for the regime’s brutal rule in the late 1970s, which is blamed for the deaths of 1.7 million people – a quarter of Cambodia’s population at the time.

The communist Khmer Rouge regime that ruled Cambodia from 1975-79 was accused of genocide for causing the deaths of so many of their countrymen from executions, starvation and lack of medical care due to its radical policies.

Only after neighboring Vietnam pushed the Khmer Rouge from power did the scale and barbarity of their rule become absolutely clear.

As commander of the top-secret Tuol Sleng prison code-named S-21, Duch was one of the few ex-Khmer Rouge who acknowledged even partial responsibility for his actions, and his trial included his own wrenchingly graphic testimony of how people were tortured at the prison.

The site in Phnom Penh, which had been a secondary school before the Khmer Rouge came to power, is now a museum with stunning evidence of the cruelty with which the Khmer Rouge persecuted even its own members they accused of disloyalty.

Men, women and children seen as enemies of the regime or who disobeyed its orders were jailed and tormented there, and only a handful survived.

‘Everyone who was arrested and sent to S-21 was presumed dead already,’ he testified in April 2009.

The tribunal since Duch’s trial has convicted two top echelon Khmer Rouge leaders, while two other defendants died before their trials could be completed.

The regime’s No. 2 leader Nuon Chea died during his appeals process.

The tribunal, established in 2004 by an agreement between the U.N. and the Cambodian government, has cost more than $360 million.

The other whose appeal is under consideration, former head of state Khieu Samphan, almost certainly will be the last one to face trial, due to the Cambodian government’s opposition to any more prosecutions.

The top Khmer Rouge leader, Pol Pot, died in 1998 as a prisoner of his comrades in what had shrunk to a spent force of jungle-based guerrillas. 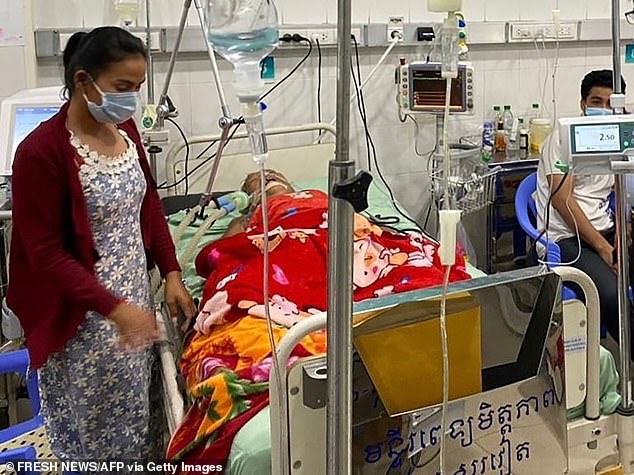 Duch was being treated at Khmer-Soviet Friendship Hospital in Phnom Penh, before his death 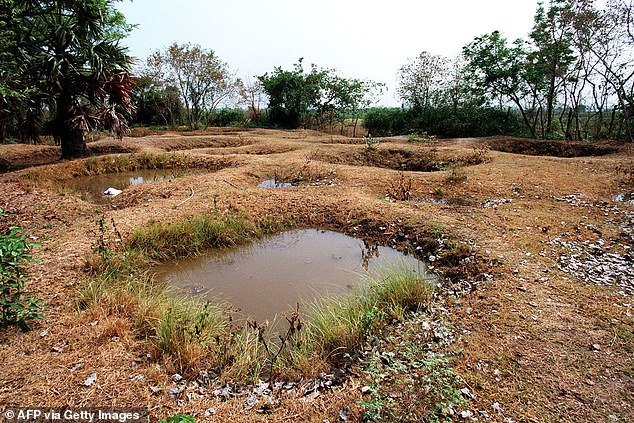 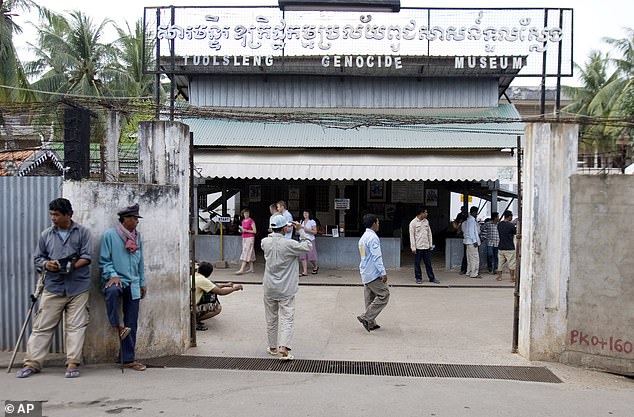 Youk Chhang, head of the Documentation Center of Cambodia, which has collected voluminous archives about the country’s tragedy, said Duch’s death ‘is a reminder to us all to remember the victims of the Khmer Rouge. And that justice remains a difficult road for Cambodia.’

Torturers under Duch beat and whipped prisoners and shocked them with electrical devices, Duch admitted to the court, but still he denied accounts from survivors and other trial witnesses that he took part in torture and executions himself.

The offspring of detainees were killed to ensure the next generation could not take vengeance.

Duch called himself ‘criminally responsible’ for babies’ deaths but blamed his subordinates for battering the young bodies against trees.

He said the prison’s own guards and interrogators were killed for small mistakes and showed rare emotion on the witness stand in June 2009 while speaking of seeing his fellow revolutionaries locked in the cells of his prison.

Confessing to betraying his own friends, he said: ‘That was beyond cowardly.’

When a guilty verdict was finally delivered against him in July 2010, he was sentenced to 35 years, shortened to just 19 due to time served.

The judges said they considered the Cold War context of the atrocities and Duch’s cooperation and expressions of remorse, however limited. But outraged survivors feared he could one day walk free.

On appeal, the sentence was lengthened in 2012 to life in prison for his ‘shocking and heinous’ crimes against the Cambodian people.

Like many key members of the Khmer Rouge, Duch was an academic before he became a revolutionary.

The former maths teacher joined Pol Pot’s movement in 1967, three years before the U.S. started carpet-bombing Cambodia to try to wipe out Northern Vietnamese troops and Viet Cong inside the border.

The Khmer Rouge seized power in 1975 and immediately attempted a radical transformation of Cambodia into a peasant society, emptying cities and forcing the population to work on the land in the country they renamed Democratic Kampuchea. 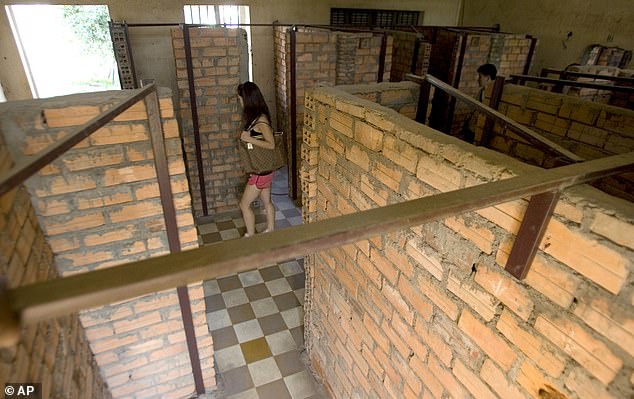 A tourist walks through cells used as a torture chamber at Toul Sleng Genocide Museum in Phnom Penh, Cambodia 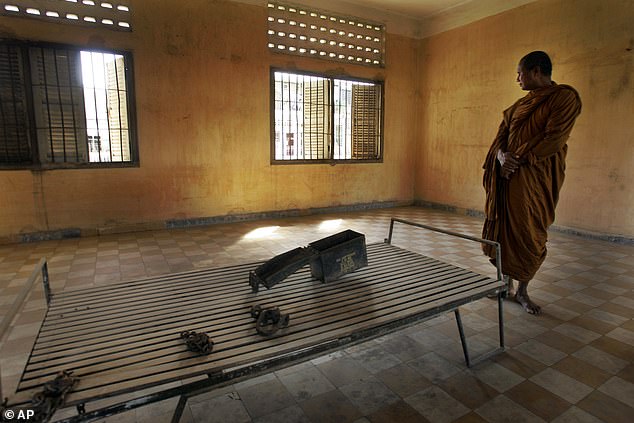 They backed up their rule with ruthless elimination of perceived enemies, and by 1976, Duch was the trusted head of its ultimate killing machine, S-21.

Tribunal judges said he signed off on all executions there and was often present when interrogators used torture to extract confessions, including pulling out prisoners’ toenails, administering electric shocks, and waterboarding.

Despite his denials, the judges said he had at times taken part in the torture and executions himself.

The torture and executions that took place at Tuol Sleng were routinely recorded and photographed, and when the Khmer Rouge were forced from power in 1979, the thousands of documents and film negatives left at the prison became proof of the regime’s atrocities.

Duch fled, disappearing for almost two decades in northwestern Cambodia and converting to Christianity until a chance discovery by a British journalist in 1999 led to his arrest.

Duch has several times asked for forgiveness, even offering at one point to face a public stoning.

But his surprise request on the final day of the trial to be acquitted and freed left many wondering if his contrition was sincere.