Finn Ward's new life was meant to start when he landed in Melbourne for Christmas last year.

Some backpacking would lead into three months of regional work to extend his visa into a second year, the hopeful beginning of a path to join his Scottish mother and Australian stepfather permanently in Melbourne. 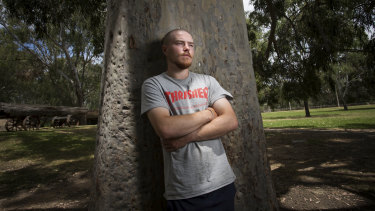 Finn Ward’s visa will expire a couple of days before Christmas.Credit:Paul Jeffers

“I was calling and emailing but just couldn't find a job in the first lockdown," says the 23-year-old from Crieff in Scotland's north.

"In July I was offered two jobs in construction in regional Victoria. A week later, the second wave restrictions hit and the bosses said they couldn't host anyone from Melbourne. I was pretty much trapped in the city."

On December 23, Finn's visa will expire and he will be forced back to the United Kingdom, giving up his only shot at a working holiday maker visa.

The federal government has offered working holiday makers who left Australia or could not enter due to the pandemic a chance to re-apply and start a new visa at minimal cost.

But for internationals like Finn, who has spent $17,000 of his $20,000 savings in Australia since Christmas, there is so far no second chance. Melbourne's "four reasons to leave home" lifted on October 26, just 58 days before his visa expires.

"There's so much uncertainty at the moment but I'm preparing to have to try and find flights to leave back to Scotland before Christmas." 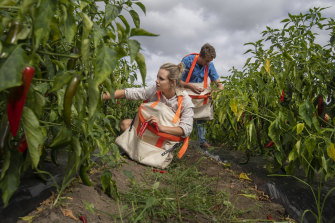 Working holiday makers comprise up to 60 per cent of some farms’ workforces in a regular year.Credit:Brian Cassey

Migration lawyer Sam Fitzsimons, who gave evidence to the committee in September, says she has heard of other cases like Finn's – backpackers previously trapped in Victoria whose only chance to extend their working holiday visa has been stifled this year.

"I think it is a really good example of where it's absolutely unfair, with the unprecedented nature of COVID," says Ms Fitzsimons, co-chair of the Victorian Law Institute's Migration Law Committee.

“Unfortunately the Immigration Department can’t just 'extend' a visa without introducing legislative change to allow exemptions for people like Finn. If we need regional workers, why aren’t we doing everything to keep the ones already here, including adapting the law to these COVID times?"

Recognising the shortfall in workers, Prime Minister Scott Morrison's government has set about luring unemployed and young Australians to farms – including telling gap-year students the love of their lives could be awaiting them among the pastures. About 22,000 Pacific Island workers are also waiting to enter Australia, pending states' approval and quarantine arrangements. 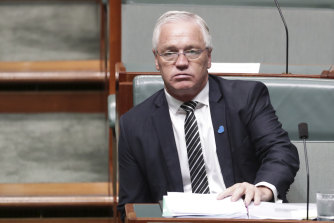 ‘We must do everything to hold on to people we have here already’: Nationals MP Damian Drum.Credit:Alex Ellinghausen

Yet federal Nationals MP Damian Drum, who sits on the Senate committee into working holiday makers, says it hasn't been enough so far.

"I think it's totally ridiculous if we kick out workers who are happy to work in the country, even if just for the summer," says Mr Drum, who represents Victoria's Goulburn Valley where fruit harvesting is urgently under way.

"The need is so extreme, it is so intense, that we absolutely must do everything to hold on to people we have here already."

A Home Affairs spokesman said Finn could be eligible for a "COVID-19 pandemic event visa", which requires sponsorship from an employer in a key industry such as agriculture, healthcare and aged care.

Finn says as well as gladly committing to 88 days of rural work he still holds out hope of travelling Australia, with working holiday makers contributing $3.1 billion to the economy in a normal year according to Tourism Australia.

"Back home in Scotland they're in lockdown at the minute, getting 20,000 cases a day. It would be going back to a pretty grim situation," Finn says.

"If my visa got renewed and I could start from scratch, or even if it was extended for a few months, I would go and do my 88 days straight away. It hasn't been through a lack of trying this year."