A MAN was stabbed to death yesterday in a broad daylight park attack – with two people arrested for murder.

The 31-year-old was found with knife wounds in Boscombe Chine Gardens, Bournemouth. 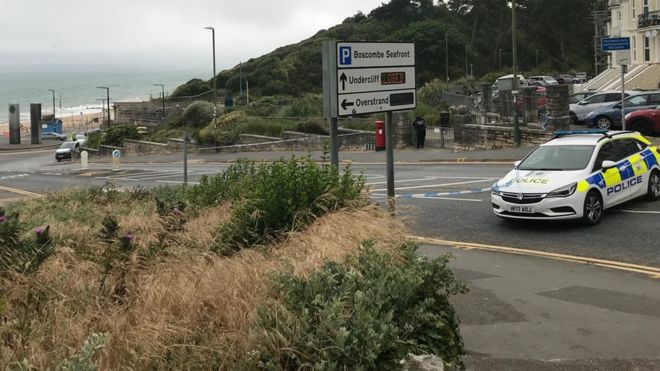 Stunned witnesses called emergency services to the park, and medics tried to save him – but he was pronounced dead at about 6pm.

Cops rushed to the park, near to the Dorset beach, and arrested a 37-year-old man before also detaining a second man, 33, found nearby with neck injuries.

Both were arrested on suspicion of murder.

The 33-year-old suspect was taken to hospital for treatment but his condition is not believed to be life threatening.

A 28-year-old woman was also arrested on suspicion of assisting an offender and is assisting police with their enquiries.

The victim was from the Bournemouth area and his family have been informed of his death. The three suspects are also from Bournemouth.

A white forensics tent was also seen in the gardens placed over the man's body.

Witnesses saw dozens of police racing to the park, and a helicopter scrambled to the area.

The suburb of Boscombe is known to be a popular spot for people to drink and take drugs, and the area has a large number of housing association bedsits and B&Bs.

In 1995 hotel barman Paul Bradshaw was bludgeoned to death in the park with a studded club by two men in a homophobic attack.

And in 2016 two men were seriously injured after being stabbed in the neck as they walked through the same park.

Police are appealing for witnesses to the latest incident that happened at 5.49pm yesterday.

Detective Chief Inspector Andy Dilworth, of Dorset Police, said: "We are carrying out a detailed investigation to establish the full circumstances of what happened.

"I would urge anyone with information that could assist this investigation, or who witnessed any suspicious activity in the area around the time of the incident, to please come forward."