The Mexican police officer involved in the arrest of the son of reputed drug lord Joaquin ‘El Chapo’ Guzman was assassinated after his car came under a barrage of gunfire inside a parking lot.

Closed circuit television cameras captured the horrifying moment on Wednesday morning when at least two armed men with semiautomatic rifles climbed out of a red car and opened fire at a white Nissan four-door sedan.

The red car followed the white car into the parking lot of a shopping center in Culiacán, the capital of Sinaloa state, Infobae.com reported. 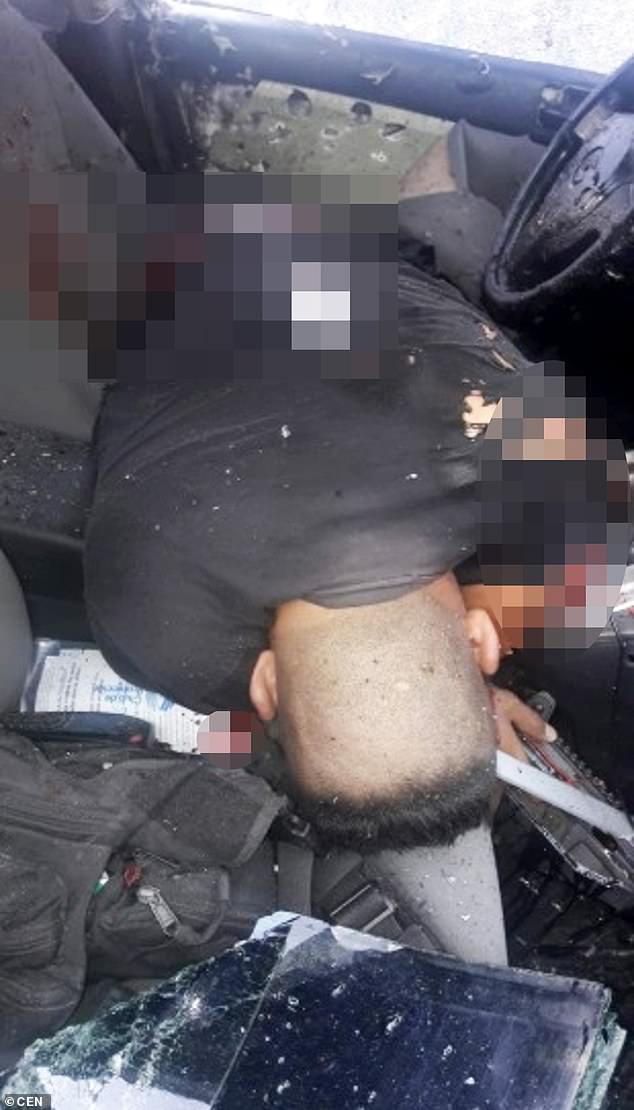 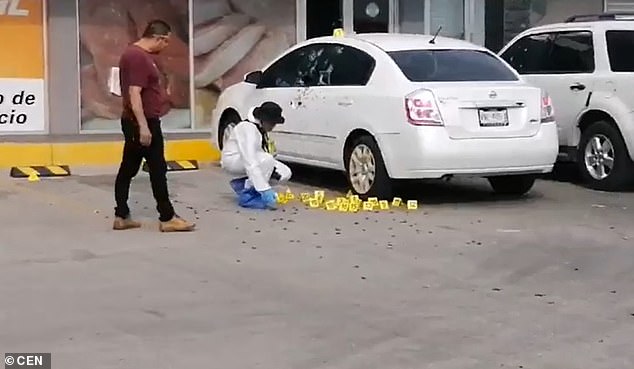 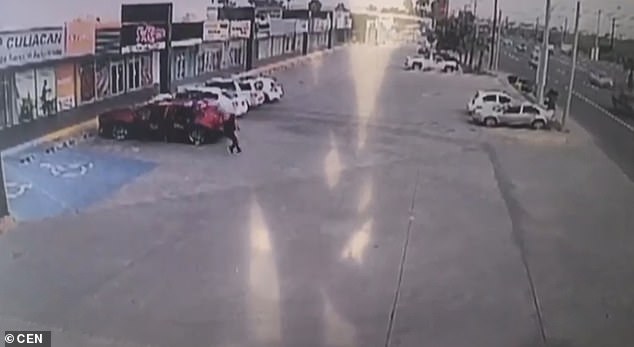 The ambush on Wednesday morning took less than 30 seconds

The ambush took less than 30 seconds as the gunmen fired at least 150 bullets into the white vehicle.

The authorities identified the dead officer as Eduardo ‘N,’ 32.

The victim was a high-level officer with Sinalo’s State Preventive Police. 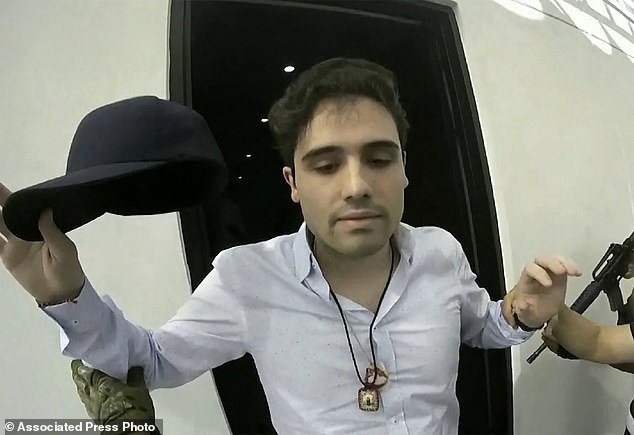 This October 17, 2019, frame grab from video provided by the Mexican government shows Ovidio Guzman Lopez at the moment of his detention, in Culiacan, Mexico. Mexican security forces had Ovidio Guzman Lopez, a son of Joaquin “El Chapo” Guzman, outside a house on his knees against a wall before they were forced to back off and let him go as his gunmen shot up the western city of Culiacan 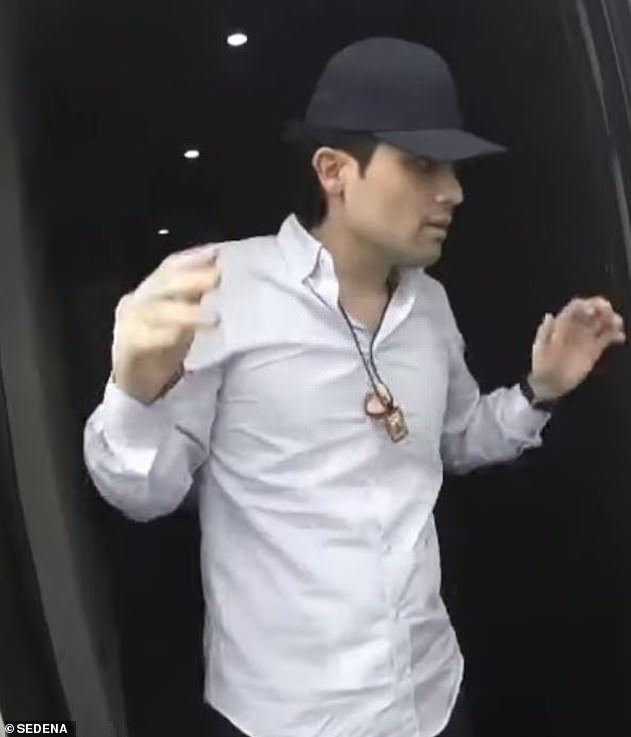 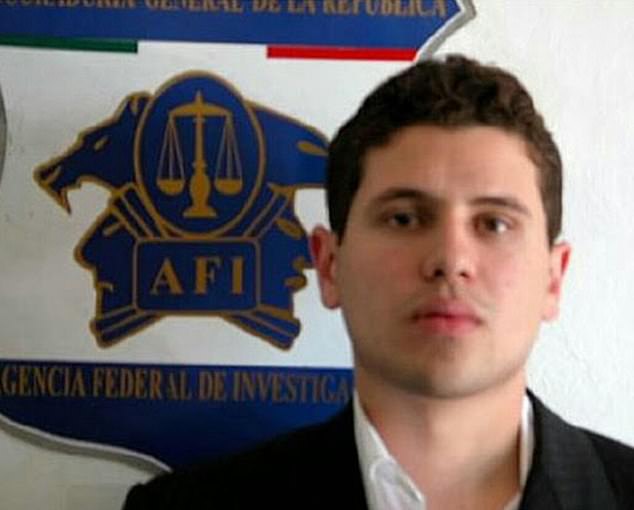 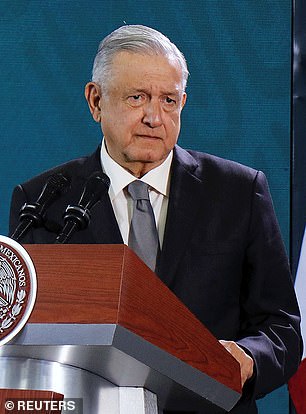 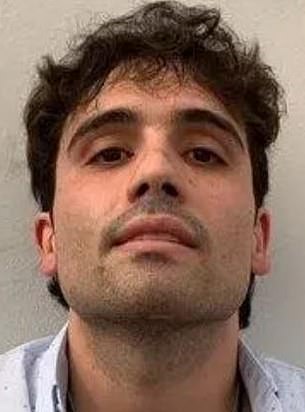 Mexican security forces had Guzman Lopez outside a house on his knees against a wall before they were forced to back off and let him go as his cartel’s gunmen shot up the Culiacan.

The video shot by soldiers shows Guzmán exit the house with his hands up.

Soldiers order him to call off the attacks around the city as gunfire is heard in the background.

Guzmán called his brother Archivaldo Iván Guzmán Salazar on his cellphone and told him to stop the chaos.

Archivaldo refused and shouted threats against the soldiers and their families.

The attacks continued and eight minutes later the first wounded soldiers were reported. 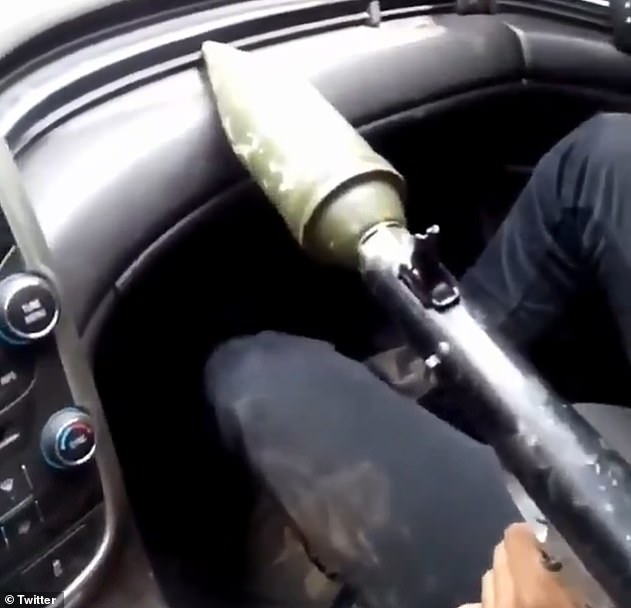 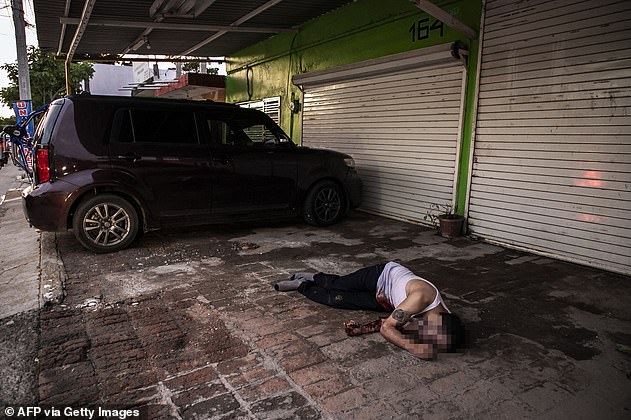 A body is seen laying on the street after the deadly gun battle. Culiacán exploded in violence with armed cartel members in trucks roaring through the city’s streets shooting at soldiers with machine guns 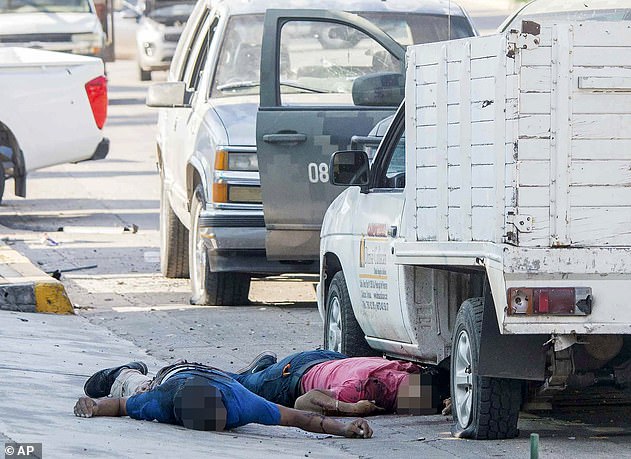 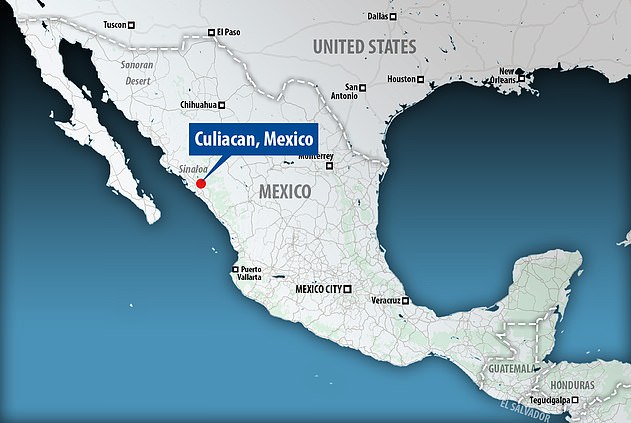 Archivaldo Guzmán surely knew at that point that the cartel had the upper hand.

Thirteen people were killed in gunbattles around the city.

Mexico’s Public Safety Secretary Alfonso Durazo said that the aborted operation to arrest Guzmán Lopez was a ‘hasty action’ that deserves criticism – but the details revealed showed that the arrest had been in the works for more than a week.

The government’s timeline of events showed that the U.S. government requested Guzmán Lopez’s arrest for extradition on September 13, and on October 9 a special Mexican army anti-drug unit traveled from Mexico City to Culiacan to prepare.

Authorities were still in the process of obtaining a search warrant when the operation began on October 17 outside a large home where Guzmán Lopez had been located.

As they moved on the house, gunmen began attacking those involved in the operation.

Sandoval said that once lawmen came under attack, the search warrant was no longer needed.

What seemed clear was that once the operation started, government forces were quickly outmaneuvered by the Sinaloa cartel.

Military planners had four additional teams forming an outer security ring for the operation, but the cartel’s gunmen cut off the routes for three of them preventing additional support from arriving. 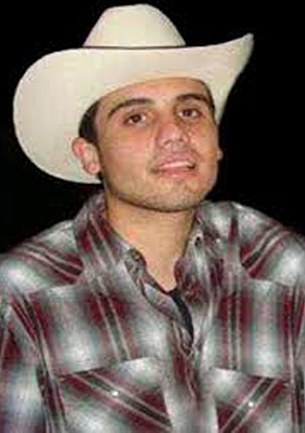 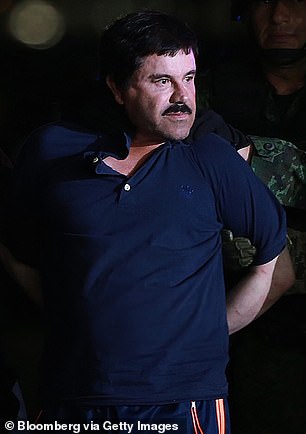 Ovidio Guzmán López  (left), along with his brothers, is believed to be a leader in the Sinola Cartel ran by his father, Joaquín ‘El Chapo’ Guzmán, (right), before he was jailed in theUS 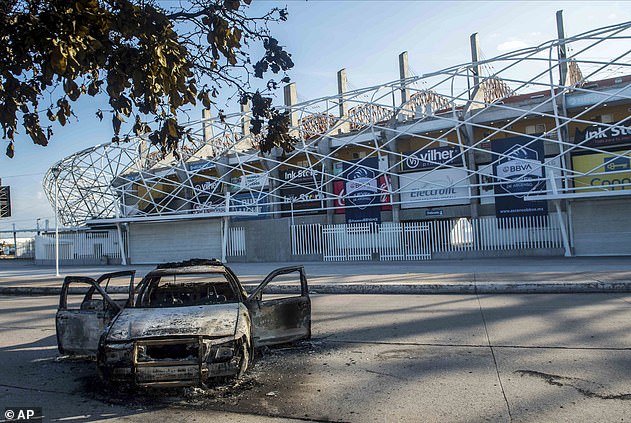 A burnt vehicle sat across the street from a soccer stadium in Culiacán, Mexico, a day after armed gunmen waged an all-out assault against the Mexican military 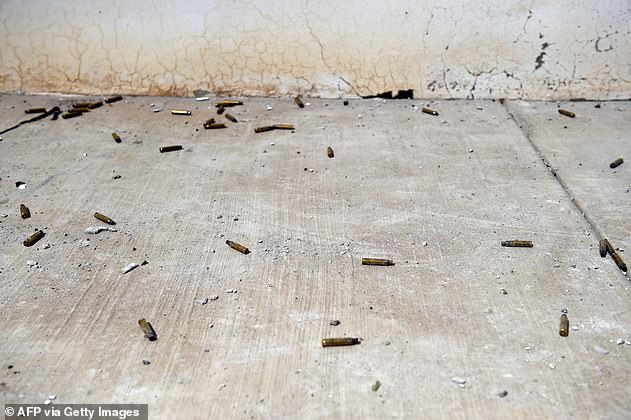 Dozens of bullet casings litter the sidewalk in Mexico, a day after heavily armed gunmen attacked the military and forced the released of El Chapo’s son 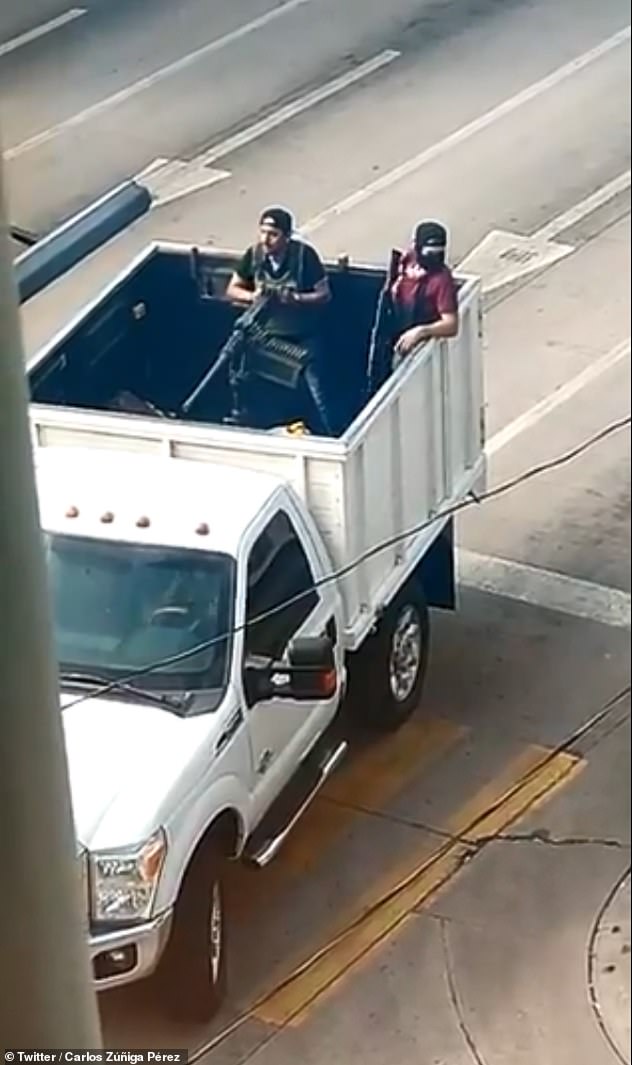 Meanwhile, the cartel sent convoys of gunmen to several military installations around the city to attack soldiers and their families.

At one military housing block, a sergeant ushered children who were playing outside to safety, but he was taken hostage.

In all, two officers and nine soldiers were taken hostage by the cartel, according to Sandoval.

The bulk of them were providing security for two fuel tanker convoys at a toll plaza on the outskirts of the city.

Once Guzmán Lopez was released, all the military personnel were let go as well and the team that had captured Guzmán Lopez left.

It was unclear was who was negotiating with cartel during the confrontation.

Sandoval said that the leader of the team with Guzmán Lopez was offered $3million to let him go, but refused and was then told the cartel would kill him and his family.

Timeline of the October 17  battle in Culiacán that stops the arrest of El Chapo’s son, Ovidio Guzmán López

2:00 PM PT: Mexican military confirms the presence of Ovidio Guzmán López at a home in Tres Ríos, an upscale neighborhood in Culiacán

2:30 PM PT: A team of soldiers surrounds the home where Guzmán López and family members are staying

2:50 PM PT: Soldiers are met with gun fire originating from the home and armed Sinaloa Cartel members in the vicinity

3:15 PM PT: El Chapo’s son steps out through a door in the compound with his hands raised and hands himself over to soldiers

3:45 PM PT: President Andrés Manuel López Obrador learns of the operation for the first time during a meeting with his Security Cabinet

3:47 PM PT: There are reports of armed men loyal to the Sinaloa Cartel patrolling Culiacán with machine guns

3:50 PM PT: Cartel members arrive in a convoy of trucks and surround military operation bases in the nearby towns of Costa Rica, El Fuerte and Cosalá

5:04 PM PT: The cartel unleashes an attack on the military bases while other members burns vehicles in the streets and inmates break out of a prison in an attempt to stop the arrest

6:49 PM PT: The Security Cabinet orders soldiers to stand down and release  Guzmán