A Melbourne mother has described the terrifying moment a man grabbed her toddler as they were on their way to childcare.

Detectives are investigating after a man approached the two-year-old girl in Harkness, in the city's outer west, on Tuesday morning. 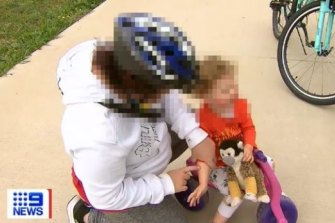 Detectives are investigating after a man approached the two-year-old girl in Harkness on Tuesday.Credit:Nine News

The girl's 32-year-old mother was riding her bike along Weeks Avenue with her daughter and son about 9.20am.

"While she was distracted with one child, a male has approached the two-year-old child, grabbed her by the wrist, attempted to turn her around, at which point the mother became aware at what was occurring," Senior Sergeant David Leveridge said on Wednesday.

The woman rode towards her daughter and the offender released the child, running off past the mother.

Senior Sergeant Leveridge said police would not speculate on the man's motive until they had spoken to him.

"We are concerned about the behaviour. Until we speak to the person concerned we have to treat it extremely seriously until we know differently," he said.

The mother, who did not want to identified, told Nine News she "didn't know what to think" when she saw the man approaching her daughter.

"At that point, then I rode down to her and he just ran off from me. I reckon he was trying to take her. Which is scary. She's only two," she said.

The girl was not seriously injured during the incident but her mother said she had a mark on her arm.

"Last night she had trouble sleeping, she was very scared. She has a mark on her arm from the man grabbing her. It is just scary, you shouldn't have to live in fear."

Senior Sergeant Leveridge said police believe it was an isolated incident and have not had reports of similar incidents.

There will be an increased police presence in the area over the next few days to reassure the community.

Police said the offender is believed to be African in appearance, aged in his early 20s and was not wearing a mask.

He was wearing dark clothing and a white baseball cap at the time of the incident.

Anyone with information can contact Crime Stoppers on 1800 333 000 or submit a confidential report online at www.crimestoppersvic.com.au