BBC presenters are not ‘robots or idiots’ and ‘we’re not there to simply, blankly read the news’ says Naga Munchetty after Emily Maitlis row

Broadcasters try to be impartial but they are not ‘robots or idiots’, Naga Munchetty has said.

The BBC Breakfast presenter said her role is not to sit and ‘blankly’ read the news but instead inform viewers ‘neutrally’ and give insight where possible.

Last year the 45-year-old was embroiled in a race row after she condemned President Donald Trump for telling some female politicians to ‘go back’ to where they came from. 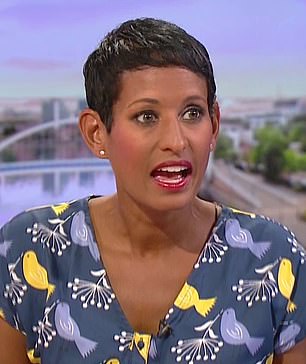 She was found to have breached editorial guidelines by the corporation’s complaints unit, but the ruling was reversed after an outcry.

‘Racism is racism and the BBC is not impartial on the topic. There was never a finding against Naga for what she said about the President’s tweet.’

Asked about the controversy, she has now told the Women’s Prize for Fiction podcast: ‘I sit on that sofa as a woman, as a person of colour from an ethnic minority who is not a robot. We’re talking about Black Lives Matter now, we’re talking about George Floyd… We are not robots. We are not there to simply, blankly, read the news. That isn’t our job.

‘We are judging what viewers need to know and we’re informing them as neutrally but with insight as much as we can.We are impartial but we’re not idiots.’

BBC presenter Emily Maitlis was also accused of violating the BBC’s impartiality guidelines after she delivered a highly critical monologue about the Dominic Cummings lockdown controversy during an episode of Newsnight.

She said Mr Cummings had ‘broken the rules’ when he travelled from London to Durham during lockdown and ‘the country can see that, and it’s shocked the Government cannot’.

Anger flooded in from some incensed by the initial broadcast, which they believed showed bias, while others were furious about the corporation’s rapid climb down, after it issued a statement saying Maitlis had broken the rules.

The BBC said the monologue ‘did not meet our standards of due impartiality’.

Despite censuring the broadcaster, 49, the BBC has insisted the case is now closed and Ms Maitlis will face no formal investigation – but Ofcom is being urged to probe the incident after receiving hundreds of complaints.