This poster was produced by the Sonnenkrieg Division, a British version of the US neo-Nazi group called the Atomwaffen Division

A British version of a violent American neo-Nazi group has called for Prince Harry to be shot because he is a ‘race traitor’ for marrying Meghan Markle.

The Atomwaffen Division was founded in the US around 2013 with the aim of destroying civilisation in order to build a national socialist state, and has been linked to five murders.

Its UK offshoot is known as the Sonnenkrieg Division, which a BBC investigation claims was set up by university student Andrew Dymock. The 21-year-old, who is the son of a dentistry professor from Bath, denies this or any other wrongdoing.

The BBC also alleges it had evidence identifying one of the group’s key propagandists as Oskar Koczorowski, a 17-year-old from west London.

Its investigation found hundreds of messages exchanged between neo-Nazis in Europe and the US over several months.

These included key figures in the Atomwaffen Division, which is German for ‘atomic weapon’.

The group’s leader, Brandon Russell, was sentenced to five years in prison earlier this year after police found bomb-making materials in his apartment in Tampa, Florida.

Members of the Hitler-loving terrorist group are also known to practice hand-to-hand combat, camping, survival and firearm use skills.

The chat logs also provide information on the creation of the Sonnenkrieg Division.

One user called ‘Blitzy’ called Sonnenkrieg ‘Atomwaffen with less guns [sic]’ and stated in one message ‘kill all police officers’.

The BBC claims ‘Blitzy’ is Mr Dymock and that he and Mr Koczorowski were involved in spreading propaganda.

One image posted by a member of the group showed Prince Harry with a gun to his head with the outline of a swastika and the caption ‘see ya later, race traitor!’ 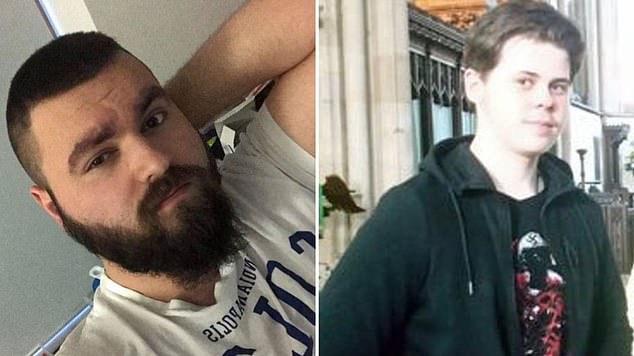 The hateful claim is a regular fixture on far-right forums that are widely accessible to the public.

Mr Dymock told the BBC through his lawyer that its allegations were ‘wholly incorrect’ and he was not a member of any of the groups mentioned.

The lawyer said any interest he did have was ‘associated with his studies’ at university in Wales.

Mr Koczorowski appeared at the door of his home in a hoodie emblazoned with the Atomwaffen Division logo. He did not respond to the allegations.

The BBC has passed all its findings on to the police. Sonnenkrieg is thought to have 15 members in Britain and Europe, at a maximum.