New Yorkers are famously short on time and love bagels – so while this attack in a Brooklyn deli is shocking, it is perhaps not surprising.

This is the moment a ‘drunk’ man was caught on film yelling and throwing things at staff in a Williamburg deli around 4.30am on Sunday.

In the footage, the man can be heard demanding ‘a cinnamon toasted raisin bagel with bacon, egg and cheese, right f***ing now’ as he pounds on the counter glass. 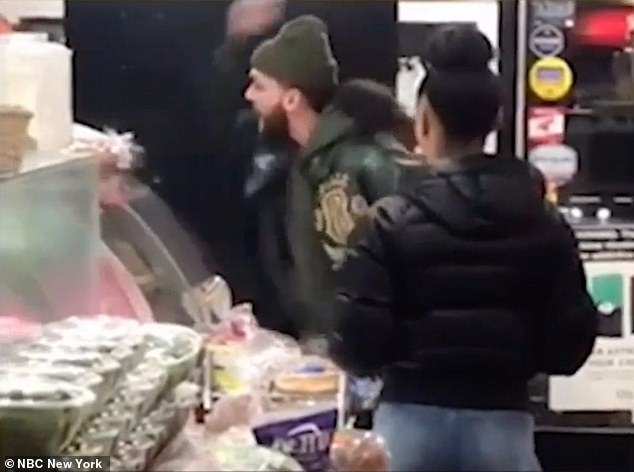 Police are hunting for a man caught on film in a Williamsburg deli demanding ‘a cinnamon toasted raisin bagel with bacon, egg and cheese, right f***ing now’ at 4.30am on Sunday

Worker Sanjay Patel, 28, told NBC New York that the customer lost it after being asked to wait ‘five to 10 minutes’ because he had a couple of orders stacked up.

But when Sanjay tried to calm the man down, it only enrages him further. ‘I don’t wanna listen,’ he shouts, ‘make my s*** right now!’

He then pelts Sanjay with a bag of bread before the footage cuts out.

The deli worker said the customer also threw a tablet computer and metal stand that he uses to take orders at his head, along with a shopping basket.

Sanjay said the man also threatened to come back and shoot him. 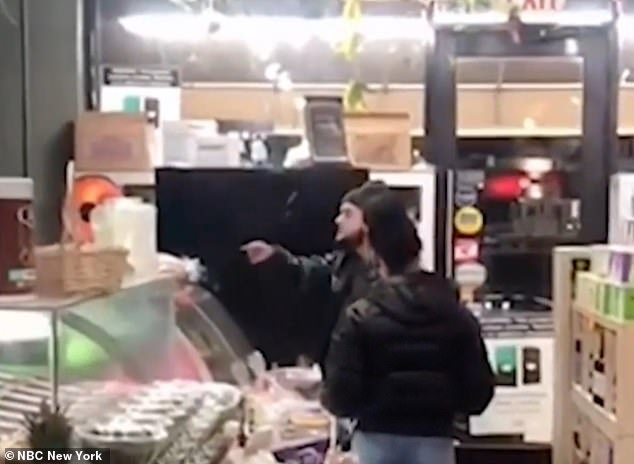 The man, described as Hispanic and in his late teens or early 20s, also threw a computer tablet and hand basket at the deli worker before fleeing without his breakfast

He eventually called the cops, at which point the customer left and jumped into a car outside, without ever getting his breakfast.

When police and ambulance workers arrived Sanjay was taken to hospital to be treated for bruising and swelling where the objects hit him.

‘When I sleep, nighttime, I still dream it,’ he said.

Police are now hunting for the man, who they described as Hispanic, in his late teens or early 20s and with a dark beard.

Anyone who recognizes the man in the surveillance video is asked to contact NYPD Crime Stoppers at nypdcrimestoppers.com