New York City’s restaurant industry held a wake for itself Monday —complete with a white coffin and bagpipes — to protest COVID-19 restrictions.

During the event, more than 200 chanting, sign-waving restaurant owners and workers marched on Gov. Andrew Cuomo’s Manhattan office, urging him to take more action to help them.

“We’re not surviving, we’re dying,’’ said Patrick McNamee, who owns the Mean Fiddler in Times Square and several other eateries.

The group is demanding that indoor dining be immediately expanded to 50 percent capacity and then to 100 percent by Thanksgiving, as well as for Cuomo to push for federal aid for them.

The most the city and state are allowing so far is indoor dining at 25 percent capacity starting Wednesday — since shutting down inside service when the deadly pandemic broke out in March.

Several protesters carried a makeshift coffin that had “Here Lies NYC Hospitality. DIED 2020,’’ written on it, while the sound of mournful bagpipes filled the air as the group marched roughly seven blocks from Eats 38th Street to Cuomo’s office at 633 Third Ave.

“We’re the walking dead if we don’t get 50 percent through,’’ McNamee said.

Ronan Downs, owner of The Dubliner and Beckett bar, added: “The situation is desperate right now — we have 20 percent of our employees working.

“People lost businesses they’ve invested in for 25 to 30 years, so it is like a funeral,” Downs said of the event. “It’s impossible to survive at 25 percent [indoor dining]. The economies of scale do not work.’’

A restaurant owner who helped carry the coffin but asked to remain anonymous for fear of retribution from city officials said his family owned 13 restaurants before the pandemic but is now down to six.

“Let us reopen. We are not children, we’re responsible adults, and we’ll adhere to all the safety measures,’’ the man said. “At 25 percent, we can’t operate. We’re dead.”

Chris Page, owner of White Oak Tavern in Greenwich Village, had his 5-year-old son Jackson with him holding a sign that read, “Save my daddy’s restaurant.’’

“It was a death march,’’ Page said of the protest. “[Officials’ reopening] plan doesn’t meet our trajectory. It’s like waiting to give someone CPR after they’ve just been pulled from the water — it needs to happen right now, or thousands of bars and restaurants will close for good.” 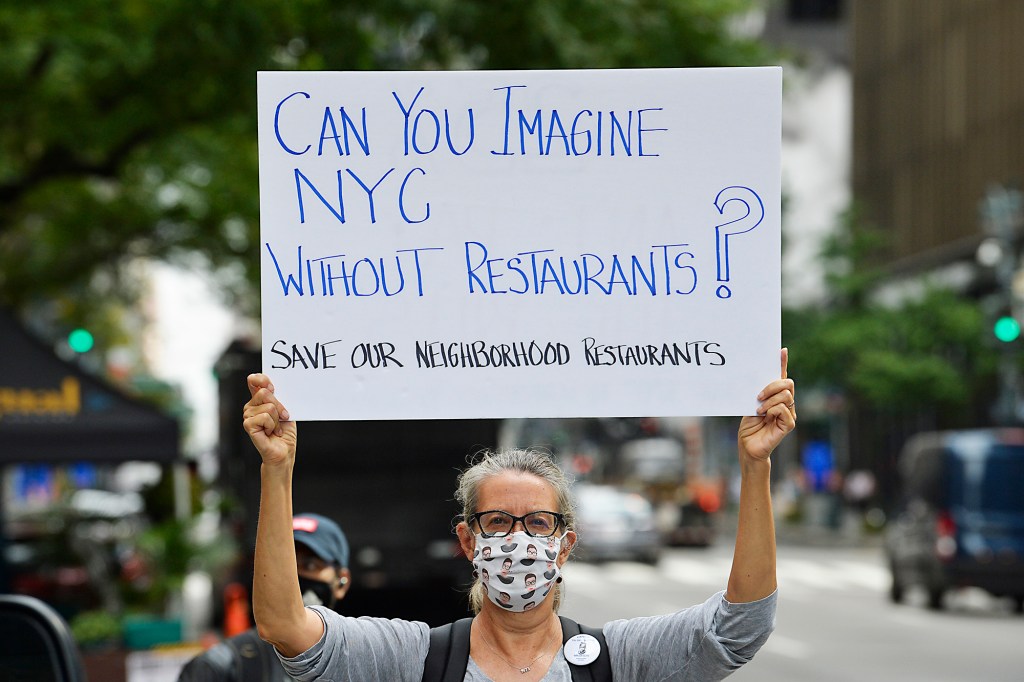 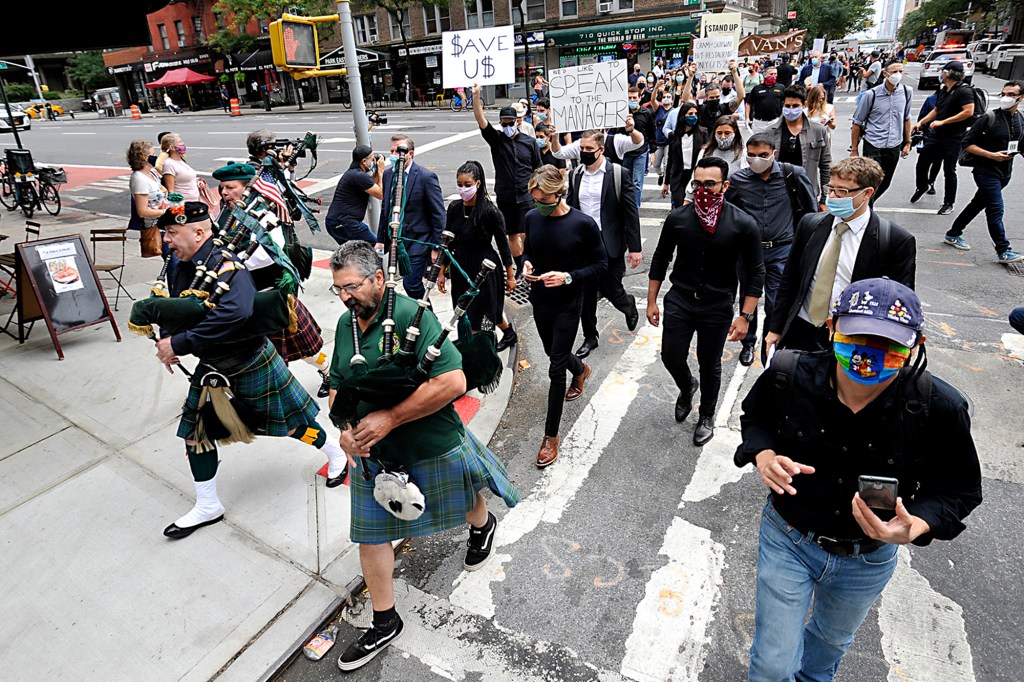 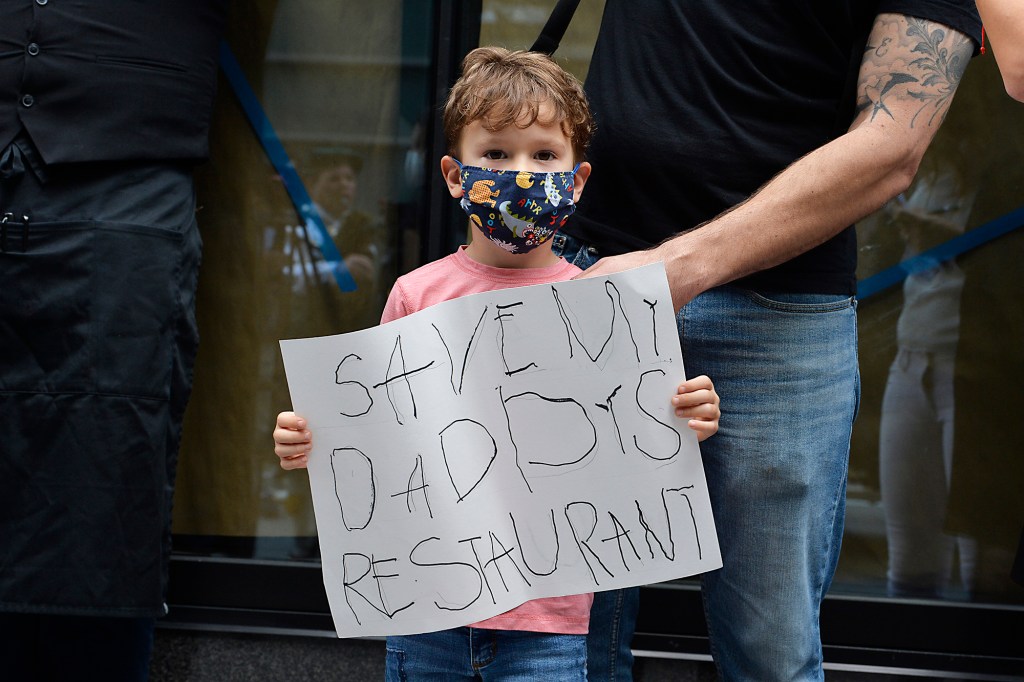 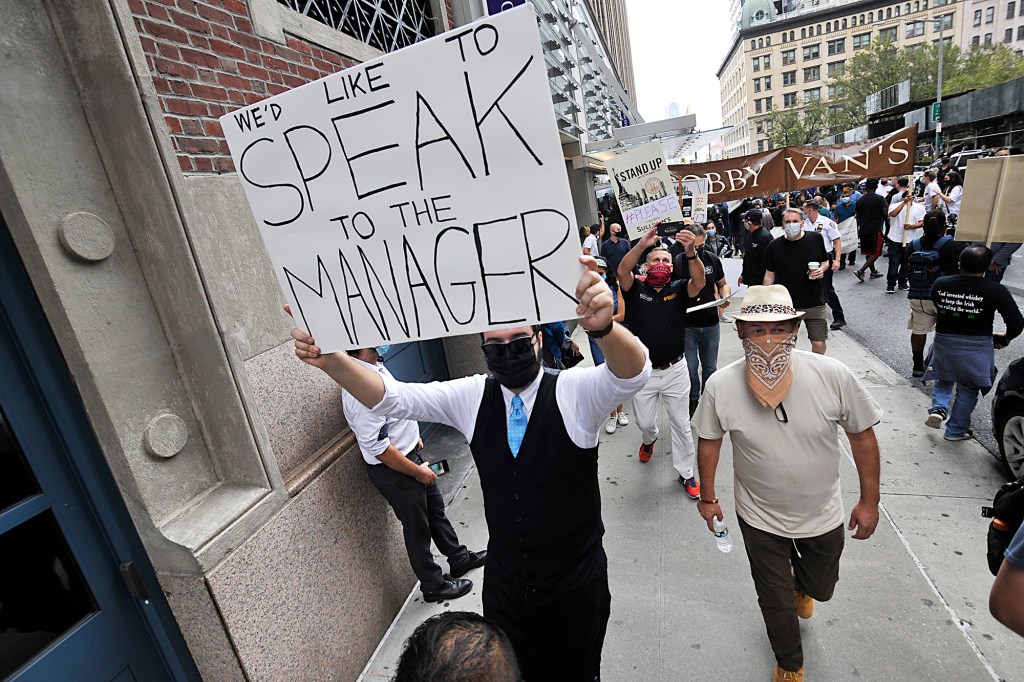 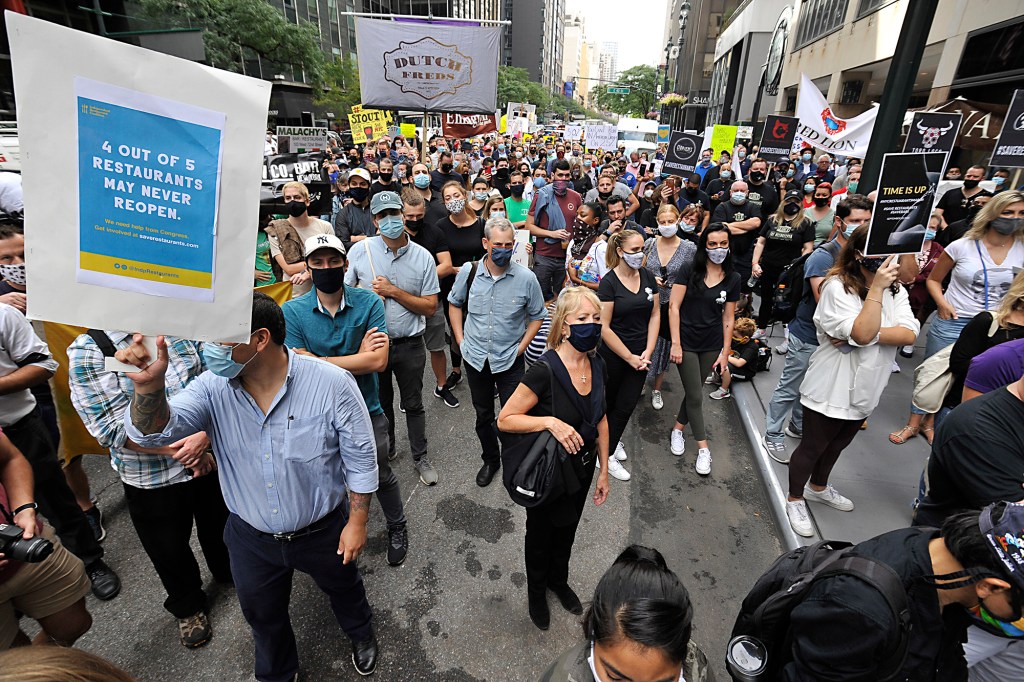 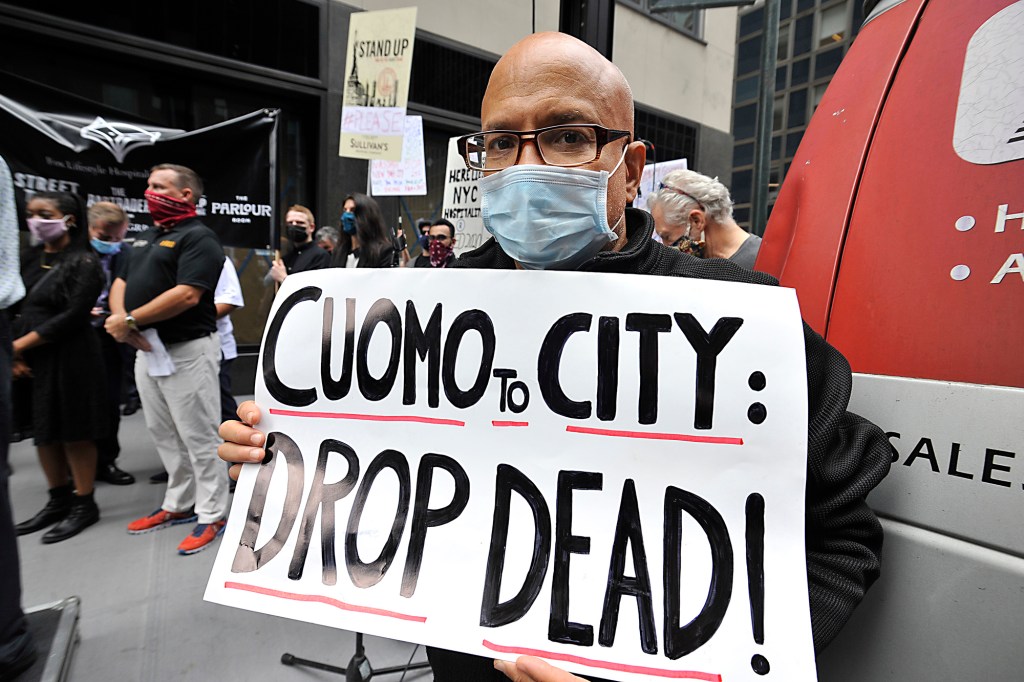 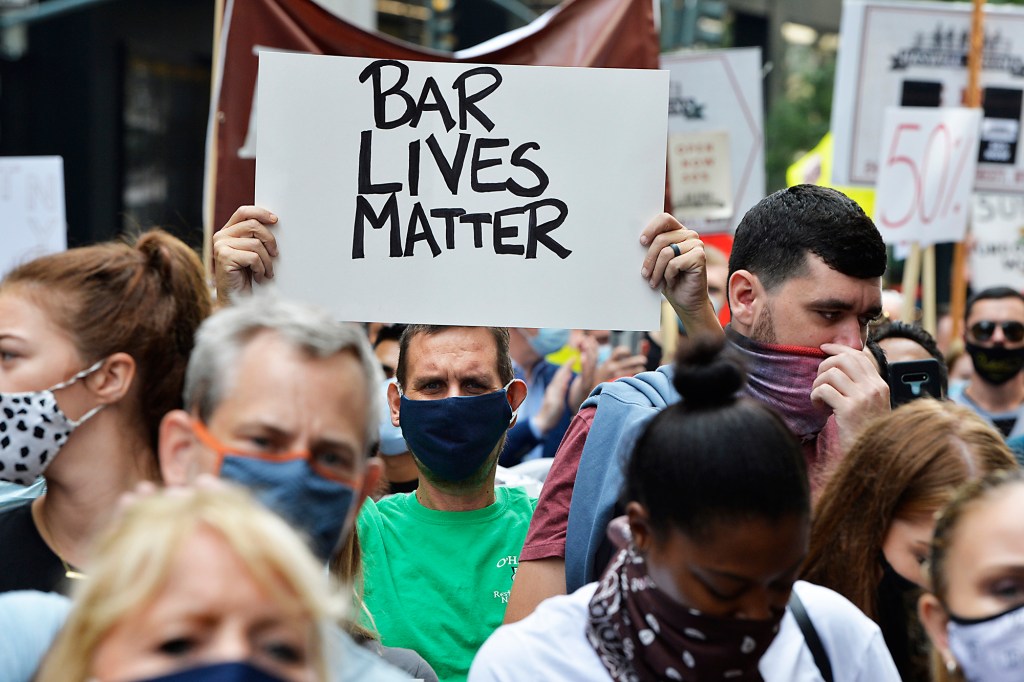 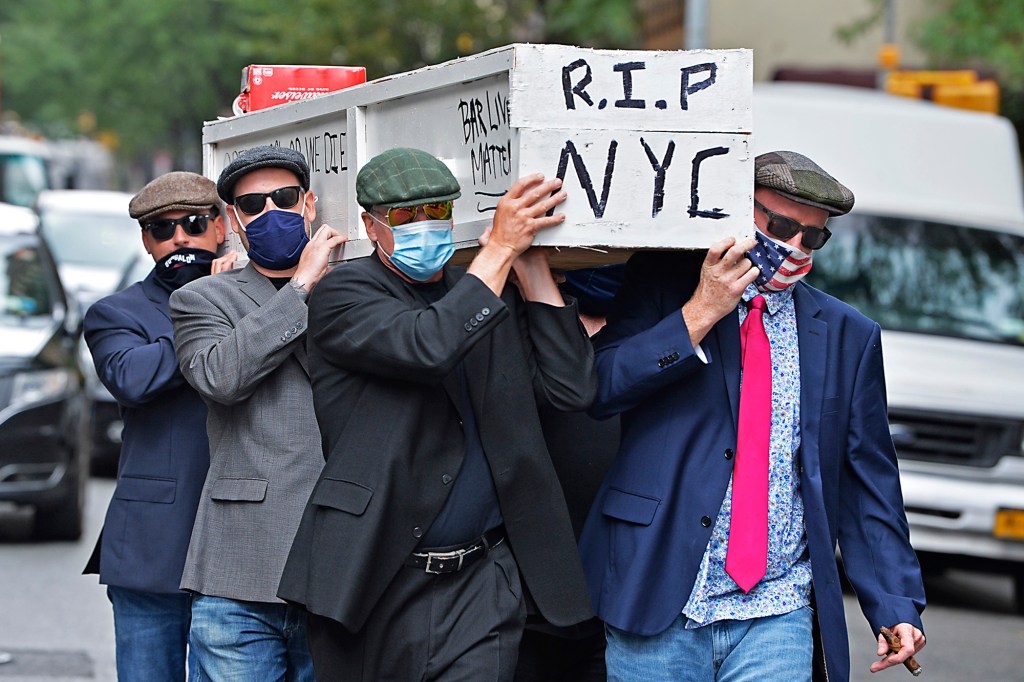