When Tom Sheather receives his VCE results on December 30 it will be a year to the day that he was defending his family’s Corryong farm from a raging bushfire.

The year 12 student and his friends and classmates Riley Saxon and Ryan Norman have endured extraordinary challenges this year, facing extreme personal hardship amid the coronavirus pandemic. 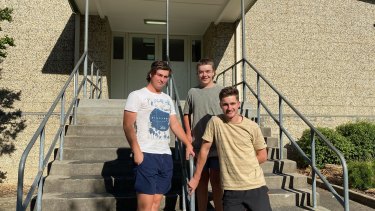 “One battle to the next”: Corryong College VCE students Riley Saxon, Tom Sheather and Ryan Norman.

As bushfires ravaged far north-eastern Victoria last summer, Tom and his family stayed to defend their burning farm, saving their home and most of their livestock.

Riley and his family thought they would lose their house while Ryan, who now works for Forest Fire Management Victoria, helped people defend their properties.

“It was moving pretty quick, you could see from behind the hill at home that red glow started to happen and it got brighter and brighter and it was all on from there,” Tom said.

“It’s all a blur really, it was fairly full-on.” 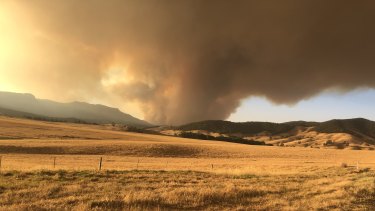 A lucky wind change and much-needed rain spared the town close to the NSW border from catastrophic damage.

But the ordeal had taken a toll and the 1500 residents had an immense clean-up and recovery task, which took up the entirety of the boys’ school holidays.

Not long after the fires, they suffered the loss of one of their good friends, who died by suicide.

For Ryan it was “miserable” and made it “extremely hard to focus on schoolwork.”

Tom, who was a school captain, said the students rallied to support each other.

“Everyone was there for each other, checking and saying ‘how are you going’?” he said.

“Even when the fire was coming through we were messaging mates saying ‘where are you at?’, ‘what are you doing’?” 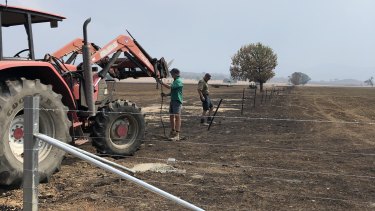 After such a traumatic start to the year, the trio was hoping to move forward and concentrate on their studies and all-important final year of school.

But then coronavirus struck and the Corryong College students were thrust into remote learning.

“It was one battle to the next, was how it felt,” Tom said.

“The second time remote learning got announced I was just like, I cannot do this again.”

All three said they felt huge relief after finishing their exams.

“You still feel like you should be doing homework but you’re actually free,” Riley said.

Tom’s mother, Trudy Sheather, said it has been a year she and her family want far behind them.

“It’s been bloody awful. They [the boys] were really thrown in the deep end and had to choose to sink or swim.”

Corryong College VCE coordinator Sandra Kovacic said she was proud of what her students had achieved.

“They’re amazing, these kids. They’re so skilled and resilient.”

She said the Corryong community was helping each other to heal.

“You need to go through a recovery. We’re all happy to see this year end.”