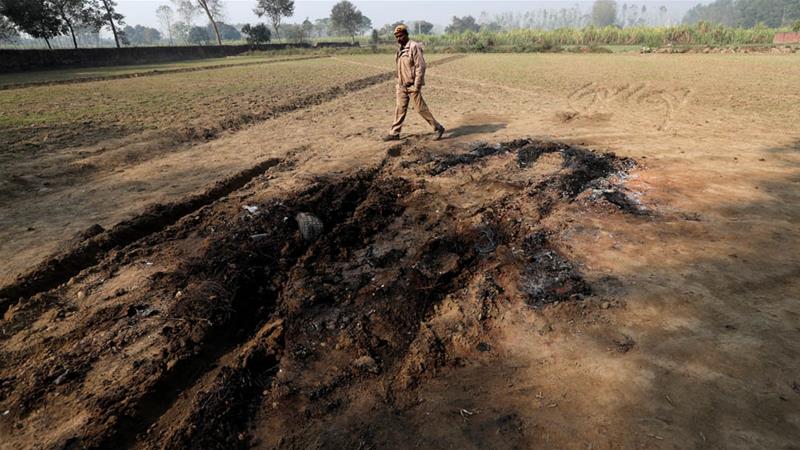 The killing of a police officer by so-called cow vigilantes, belonging to far-right Hindu groups, has triggered outrage in India.

Local media reported on Wednesday that Yogesh Raj, the main suspect behind the violence, is absconding and remains to be arrested.

Inspector Subodh Kumar Singh was killed on Monday when villagers, many of them members of far-right Hindu groups, clashed with police in Uttar Pradesh state’s Bulandshahr district, about 100km from the Indian capital, New Delhi.

The villagers were protesting the alleged inability of police in Chingrawathi village to stop cow slaughtering, claiming that animal carcasses – including of cows – were found in the area. A police outpost was torched, while a young man, who was allegedly part of the mob, also died in the rioting.

The police officer’s killing following a cow-slaughter protest was the first-of-its-kind in India, where Muslims and low-caste Dalits have been frequently attacked over the issue in the past.

Four men have been arrested so far in connection with the killing of Singh, while more than two dozen people are facing charges, including of rioting and destroying property. Seven Muslims, including two minors aged 11 and 12, were also charged by the police for cow slaughter.

A video purportedly showing the moments leading to the killing of the police officer appeared on Wednesday.

While police said they were still looking for Raj, from the Hindu right-wing group Bajrang Dal, reports on Wednesday said he had issued a video, claiming innocence and making contradictory statements over the incident.

Raj claimed he was not present at Chingrawathi, where the violent protests broke out over the alleged cow slaughter in the nearby Mahaw village of Bulandshahr district.

Raj, instead, claimed he was at a police station in Syana, a hamlet near Bulandshahr, where he said he had gone to register a report about the incident.

Meanwhile, the Uttar Pradesh police hinted at a “conspiracy” behind the violence since it occurred as tens of thousands of Muslims gathered for a religious event in Bulandshahr.

“The UP Chief Minister directed officials for a thorough probe in the incident. Instructions were also issued to take stringent action against people involved in cow slaughter,” a senior government official told reporters after the meeting.

A special investigation team has been formed by the Uttar Pradesh government to investigate the cause of the violence.

Meanwhile, the slain officer’s family has also alleged a  police conspiracy and demanded justice for his killing.

Singh was part of the team that initially investigated the infamous 2015 lynching of Mohammad Akhlaq, a 52-year-old resident of Bisara village, over allegations of cow slaughter in a district neighbouring Bulandshahr.

India’s Hindu majority regards cows as holy and their slaughter is banned in most Indian states.

In recent years, there have been a string of deadly attacks on Muslims and low-caste Dalits over cattle slaughter and beef consumption.

According to data analytics site India Spend, almost 80 cases of cow-related violence were reported in India between 2012 and 2017.

At least 39 people have been killed in such violence since 2014 when the Hindu nationalist BJP, led by Prime Minister Narendra Modi, came to power.

As India heads to crucial elections in the coming months, including the national elections due early next year, many fear such polarising issues will continue to be raised by the Hindu far-right to mobilise voters.