Police hunt four hooded men in face masks seen running from block of flats after man, 31, plunged 50ft from balcony – as he fights for his life in hospital

Police have begun a manhunt for four men who were caught on CCTV running from a block of flats in Coventry moments before a man plunged 50ft from a balcony.

The 31-year-old victim suffered serious injuries and was left fighting for his life after falling from the flats in Hillfields, Coventry, on August 17.

The man was taken to hospital where he remains in a critical condition. 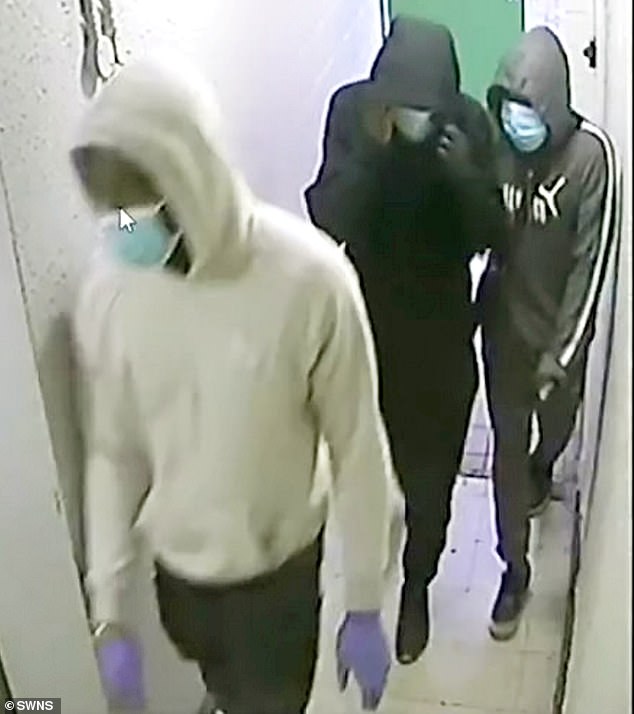 Police have begun a manhunt for four men who were caught on CCTV running from a block of flats in Hillfields, Coventry, moments before a man, 31,  plunged 50ft from a balcony

In a bid to identify the four suspects who fled the block of flats at around 7pm, west Midlands Police have released the CCTV footage of the group leaving the area.

The men are seen leaving the flats on the ground floor wearing masks, gloves, hoodies and tracksuit bottoms.

A force spokesperson said: ‘We are urgently appealing to identify them after a man fell from a flat balcony in Coventry last month.

‘We were called to Bath Street at around 7pm on Monday 17 August after a 31-year-old man fell from a second floor balcony.

‘He was taken to hospital with serious injuries and he remains in a critical condition today.

‘CCTV enquiries show a group of four men leaving the block of flats straight after the incident and we are urgently appealing to trace them as we believe they could hold vital information about what happened.’

Two men, aged 25 and 33, who were previously arrested on suspicion of attempted murder have since been released without charge.

Speaking at the time of the incident, a West Midlands Ambulance Service spokesperson said: ‘We were called at 6.58pm to reports of a patient who had fallen from height on Bath Street. 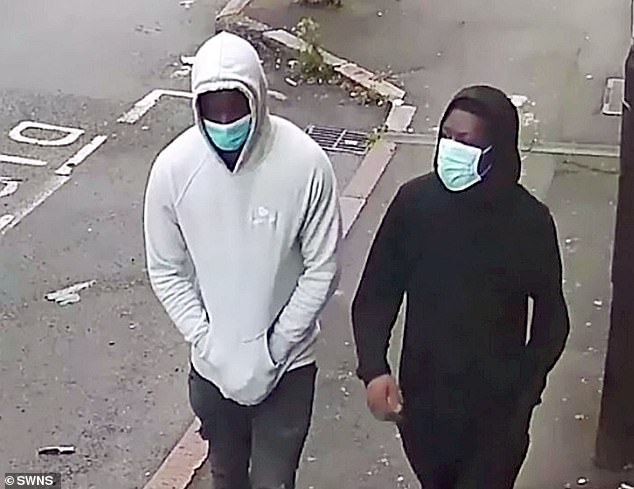 The men are seen leaving the flats on the ground floor wearing masks, gloves, hoodies and tracksuit bottoms

‘Two ambulances and a paramedic officer attended the scene.

‘On arrival we discovered one patient, a man, who was found in a serious condition.

‘He received specialist trauma care at the scene before being taken to University Hospital Coventry and Warwickshire on blue lights and sirens.

‘His condition remained serious on arrival at the hospital.’

Sergeant Megan Stokes, of West Midlands Police, had also previously appealed for witnesses to come forward and get in touch.