POLICE have warned 20 ‘rubberneckers’ they’ll be fined for filming the aftermath of a horror crash with their mobiles.

Cops slammed the drivers who slowed down to film the smash on the A13 in Essex with one hand and told them to expect a letter.

The motorist involved in the crash had a miraculous escape from death after the Audi they were driving was rear-ended by a HGV – then shunted underneath the trailer of a lorry in front.

Miraculously, the driver of the Audi managed to escape from the car without any serious injuries.

Police closed the road for several hours while they dealt with the incident.

Essex Roads Policing Unit has now warned that it will "be in touch" with nosy passing drivers – who drove by one-handed to film and take photos of the crash.

A spokesperson for the Road Policing Unit Tweeted on Monday: "Thankfully the driver of this car hit from behind by an HGV on the #A13 earlier wasn't seriously hurt.

"To the 20 or so drivers who drove by one-handed to film it with your phones not watching the road ahead, keep an eye on your mailbox as we'll be in touch." 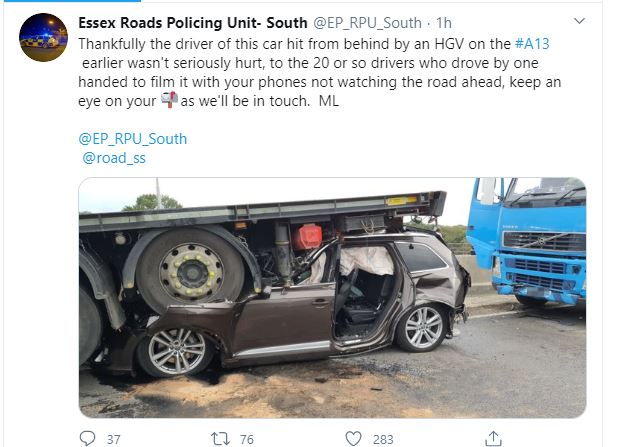 It has been a criminal offence since 2003 to use a phone while driving without a hands-free device.

Under the Road Traffic Act 1988 and Road Safety Act 2006 motorists can receive six penalty points and a £200 fine if you use a hand-held phone when driving.

If you had passed your test in the last two years, you would also lose your licence.

The collision took place at around 6:40am on Monday morning  on the westbound carriageway, just before the M25.

The metallic-grey Audi was left completely crushed after it became jammed underneath the trailer of the lorry – with the trailer's rear left wheel flattening the Audi's bonnet.

A photo shows a large dent in the front bumper of the bright blue Volvo HGV lorry, which had been travelling behind the car on the A13 westbound near Thurrock, Essex.