The optics are awful. There is no other way to spin it. The footage of police confronting and arresting a pregnant 28-year-old Zoe Buhler in her Ballarat home on Wednesday on the pretext that she had committed the offence of incitement by posting on social media an invitation to protest against COVID restrictions, has angered many and rightly so. 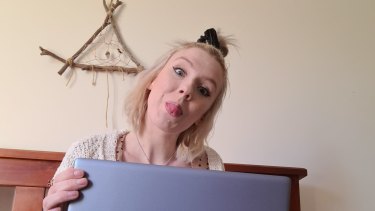 Zoe Buhler live-streamed her arrest at her Ballarat home on Wednesday.Credit:Zoe Buhler

It was arrogant, high-handed policing and will only fuel resentment about the enforcement of the severe restrictions placed on the people of Victoria by the Andrews government as it battles to control the COVID-19 virus.

If you haven’t seen the footage, it shows Buhler being confronted by police in her home on Wednesday, one hour before she is due for an ultrasound.

Police tell her she has committed the offence of incitement because of a social media post. She asks a number of times for them to explain what incitement means but this request, perfectly reasonable in the circumstances, is simply ignored by the arresting officer, who continues his monotone script about her being arrested, having the right to silence, etc.

Buhler says she will take down the post. But no, the police carry on in their blundering way, placing her in handcuffs and telling her she has already committed the offence. They do not even use the term “allegedly”!

And then they produce a search warrant and seize her phone. A woman who is pregnant ought not be deprived of her phone, one would have thought. 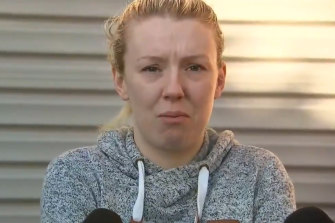 Zoe Buhler speaks to the media on Thursday. Credit:Nine News

Buhler has been bailed but according to media reports is still bewildered by what happened to her. And with good reason.

What is disturbing in the circumstances is that despite the footage showing that, in essence, police were not interested in this vulnerable woman’s clearly alarmed demeanour, Assistant Commissioner Luke Cornelius told the media on Thursday police had acted "appropriately".

"I've seen the footage, and you know, in my assessment, the members have conducted themselves entirely reasonably.

Cornelius was either watching a different incident or the way he expects his officers to interact with the community in these stressful times is troubling. That police made arrangements for an alternative medical appointment for Buhler is not the point. They should not have arrested her in the first place.

A much better way for police to enforce COVID-19 laws which many Victorians are confused about because they change often, are sloppily drafted and leave enormous discretion in the hands of police, is to educate and try to reduce tension and stress in the community.

When Buhler asked for an explanation of what she was alleged to have done wrong, that is by allegedly inciting others to break the law, the officers at her home should have told her.

Incitement is a charge rarely used in Victoria. And when she offered to remove the post from her social media pages, police should have taken her up on the offer, and ensured it was down, explained why it is important for COVID-19 rules on social gatherings to be complied with, and wished her well.

Ironically, what Victoria Police have done in their treatment of Buhler and in the doubling-down by senior officers, is to ensure greater sympathy for those who are wanting to launch protests against the Premier and his government’s draconian laws. Buhler has won the PR campaign. She is the victim of bullying and unreasonableness in the minds of many Victorians.

Greg Barns SC is a barrister and National Criminal Justice Spokesman for the Australian Lawyers Alliance.