My mother remembered the trip with a mixture of horror and wonder.

She was a child in the early 1930s when her father set out with the family to be among the first to drive the Great Ocean Road. 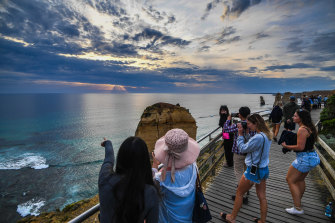 Before COVID-19, the region of the Apostles was in danger of being overrun by tourists.Credit:Justin McManus

You might imagine such numbers would be welcomed by those who make their living from the tourist trade. And so they are — in part.

But as the road emptied and attractions like the Apostles closed during the long months of COVID-19 lockdown, the people of the coast and its hinterland took a deep breath and decided the time had come to admit the tourist bonanza wasn't an unqualified bonanza at all.

Many visitors, particularly vast numbers of international travellers, largely from Asia, were little but ghosts flitting hastily by.

They barrelled down from Melbourne in minibuses or rented cars, hurried to the Apostles lookout for selfies and were gone, having ticked off another stop on the bucket list. 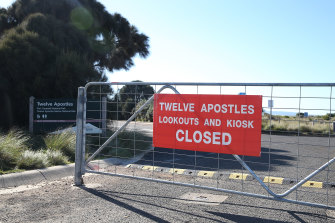 COVID-19 has closed the 12 Apostles to the public – and given locals time to rethink their approach to tourism.Credit:Mark Witte

For those who lived in this landscape, it seemed a metaphor for a modern Instagram emptiness that chooses spectacle over experience. Those who had built accommodation and restaurants and what is known as a “gourmet trail” — a loop centred on the hinterland town of Timboon where travellers can find locally produced cheeses, ice-cream, whisky, beer, chocolate, strawberries and olives — were too often overlooked.

Worse, some of the travellers had no understanding of the danger of undermined clifftops and, ignoring warning signs, climbed safety railings to capture more dramatic selfies.

Almost unbearably for the residents of the nearest town, Port Campbell, the thoughtless ventured to wild beaches, ignoring the treachery of the ocean.

On a dreadful April day last year, a Port Campbell father and son, Ross and Andrew Powell, died trying to save just such a tourist; fellow lifesaver Phil Younis suffered dreadful injuries. The tourist was saved.

Early this year, after a summer of bushfires at the other end of Victoria, creative East Gippslanders invited travellers to help rebuild their communities by bringing an Esky and filling it with local produce.

With time to think and plan during the long lockdown, the community around the Apostles and hinterland came up with their own message about rebuilding.

But this one advises would-be visitors they should behave thoughtfully and with dignity when they come to the area west of the Otways.

Community members chose to turn on its head the free-for-all come-hither theme of most such campaigns; in welcoming those who would respect the landscape and the community that lives there, they also defined the style of visitors the locals no longer wanted to see coming down the road.

“In a time of great uncertainty … one thing the 12 Apostles Tourism and Business Group are certain they don’t want is the type of visitors that disrespect the environment, don’t stay long and don’t support local businesses,” declares the statement announcing the new approach.

“Treasure the Land We Love,” they call it.

You'd hope, as we begin travelling again, that such a sentiment spreads across the nation.