EXCLUSIVE: Secret service agents tell how George H. W. Bush would raid the kitchen with them at 3 a.m. for milk and cookies and stay in DC Christmas Eve so they could spend it with their families – a far cry from haughty Hillary Clinton

Ronald Kessler, a former Washington Post and Wall Street Journal investigative reporter, is the New York Times bestselling author of ‘The First Family Detail: Secret Service Agents Reveal the Hidden Lives of the Presidents’ and ‘The Trump White House: Changing the Rules of the Game.’

Bush ‘made it clear to all his staff that none of them was a security expert, and if the Secret Service made a decision, he was the one to sign off on it, and they were never to question our decisions or make life difficult,’ former agent Pete Dowling says.

‘So consequently it was kind of a moment in time, because all the entities really worked well together to make his protection and the activities that he participated in successful.’

Like Ronald Reagan, Bush was so considerate of the agents who protected him that he would stay in town on Christmas Eve so agents could spend it with their families. Then he would fly to Texas the day after Christmas. 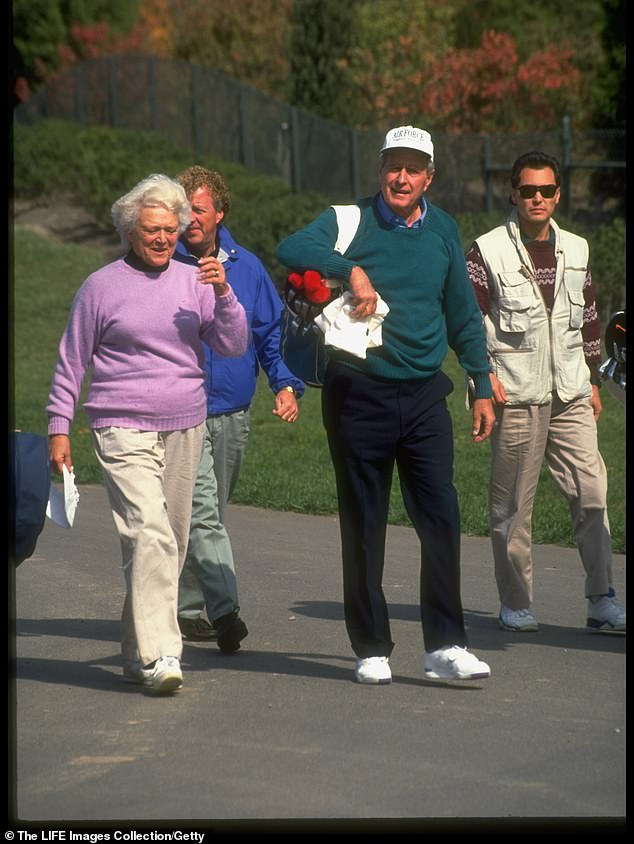 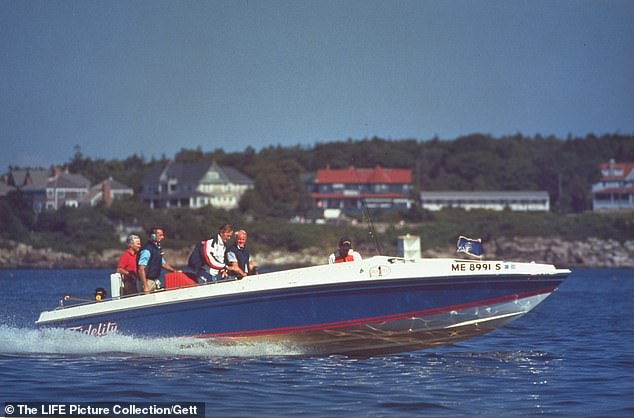 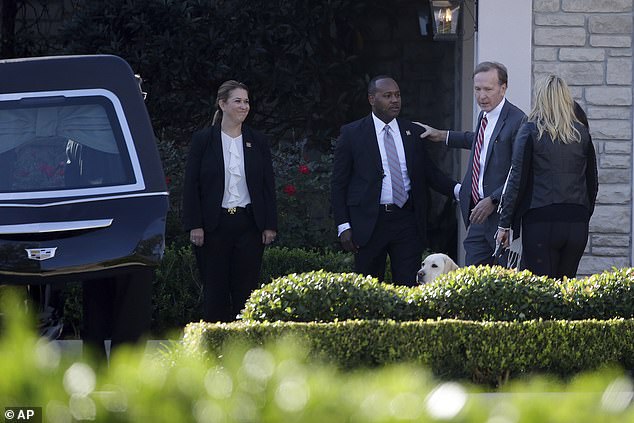 Neil Bush ( right) greets members of the U.S. Secret Service after the casket of former President George H. W. Bush was placed into a hearse at the George H. Lewis Funeral Home following a family service,Monday

‘Bush is a great man, just an all-around nice person,’ an agent said of the former president when he was alive. ‘Both he and Mrs. Bush are very thoughtful, and they think outside their own little world. They think of other people.’

‘Bush understands that politics is politics and friendship is friendship,’ an agent who was on his detail says. ‘He can be friends with a lot of people who may not agree with him. The only things that bothered him were things that were important to the country. Little things just kind of seemed to roll off of him.’

When Bush—code-named Timberwolf—was vice president, agent William Albracht was on the midnight shift at the vice president’s residence.

Albracht was new to the post, and Agent Dowling filled him in.

Assigned to the basement post around 3 a.m., Albracht was getting hungry.

‘We never had permission to take food from the kitchen, but sometimes you get very hungry on midnights,’ said Albracht.

‘I walked into the kitchen that was located in the basement and opened up the refrigerator. I’m hoping that there are some leftover snacks from that day’s reception, It was slim pickin’s. All of a sudden, there’s a voice over my shoulder.’ 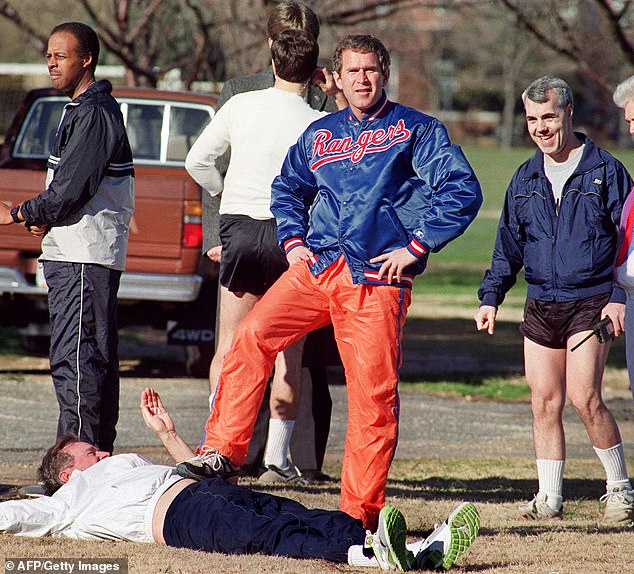 George W. Bush playfully steps upon his father 27 January 1990 while he warms up for a run at Fort McNaire Army base while his mother Barbara  and Secret Service agents look on.  ‘Bush understands that politics is politics and friendship is friendship,’ an agent who was on his detail says 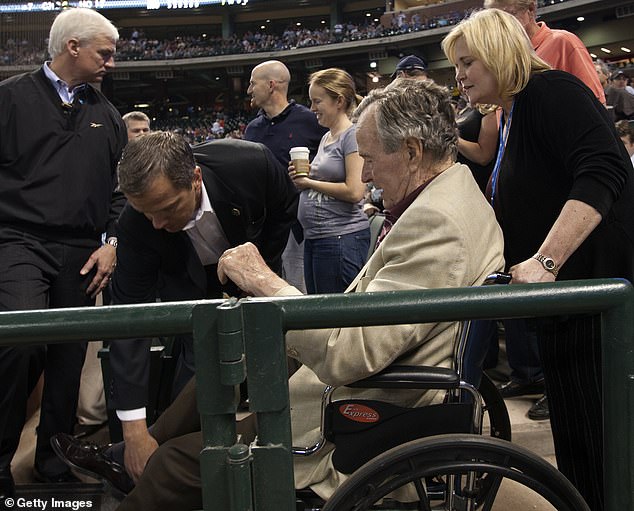 President George H.W. Bush was assisted by Secret Service as he leaves the ballpark after watching the Houston Astros play the Chicago Cubs at Minute Maid Park in 2011

‘”Hey, anything good in there to eat?'” the man asked.

‘No, looks like they cleaned it out,’ Albracht said.

‘I turned around to see George Bush off my right shoulder,’ Albracht said.

‘After I get over the shock of who it was, Bush says, “Hey, I was really hoping there would be something to eat.” And I said, “Well, sir, every day the stewards bake cookies, but every night they hide them from us.”

When Albracht returned to the post, Dowling asked, ‘Who the hell were you in there talking to?’

Albracht told him what had happened. ‘Oh yeah, sure right,’ Dowling said.

Like Hillary Clinton, Gore—who also claimed to be a champion of the ‘little people’—treated agents with disdain and told them he did not want to be bothered greeting them or seeing them.

‘Gore told agents at his home in Carthage, Tennessee, that they should duck behind bushes when they rotated shifts because the Gores didn’t want to see them,’ a former agent says.

‘I was on the detail one Christmas when Gore was at his home in Carthage,’ former agent Jeff Crane says. ‘Neighbors offered us food on Christmas Day, but the Gores never even bothered to say ‘Merry Christmas’ or ‘Thank you.’

Hillary Clinton, who continues to be protected by the Secret Service as the spouse of a former president, is so nasty to her agents that being assigned to her detail is considered by agents to be a form of punishment and the worst duty assignment in the Secret Service.

Like Bush, President Trump treats his agents with respect and consideration. Sitting on a sofa overlooking the main Mar-a-Lago pool four days before a recent New Year’s Eve party there, I asked Trump how he likes being protected by Secret Service agents. 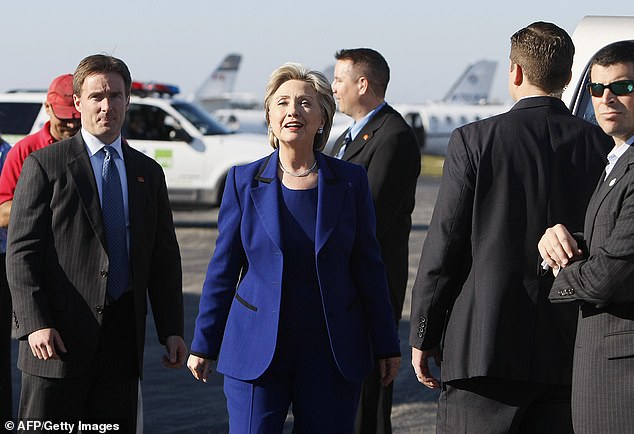 Hillary Clinton, who continues to be protected by the Secret Service as the spouse of a former president, is so nasty to her agents that being assigned to her detail is considered by agents to be a form of punishment and the worst duty assignment in the Secret Service 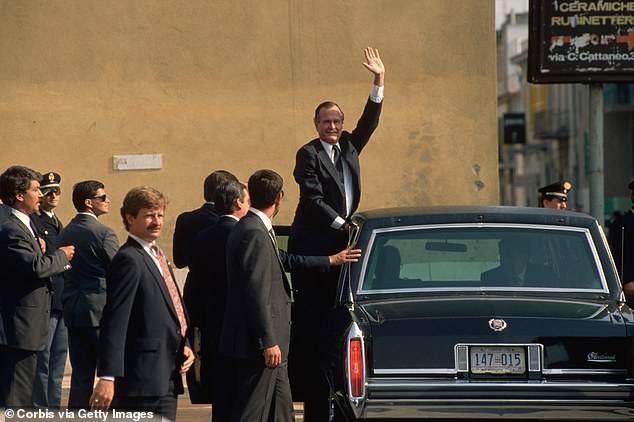 Surrounded by Secret Service agents, President George Bush waves to the crowd from his limousine after attending a ceremony honoring World War II dead in Rome

‘It’s great,’ he said. ‘I have agents all around me as I’m playing golf, and they are all looking in different directions, so when I miss a shot, they don’t see it!’

When he was vice president, Bush flew to a fund-raiser in Boise, Idaho, during the 1982 election campaign. He was to have dinner at the Chart House seafood restaurant on North Garden Street, on the banks of the Boise River.

‘The way we protected him, we had some agents inside, but typically what we’d do was situate ourselves at dining tables near him,’ Dowling says.

Dowling had been seated for a few minutes when he heard a radio transmission: Two white males in camouflage outfits and carrying long weapons were creeping around the back toward their location.

They were crawling on their bellies, moving themselves along with their elbows.

Just then, Dowling looked up and saw the two bad guys. He thought of intelligence reports that Libya had sent a hit squad to the U.S. to kill American officials.

The agent instinctively jumped out of his chair and tackled Bush to protect him. Food flew everywhere as Dowling threw the vice president on the ground and flopped on top of him.

‘I don’t know, but just keep your head down,’ Dowling answered.

Dowling looked up. He saw dozens of law enforcement officers with their guns drawn—Secret Service agents, sheriff’s department deputies, and state troopers. They were on the scene as part of routine protection for a vice presidential visit. The two bad guys were kneeling with their hands clasped behind their heads.

‘We evacuated the VP out of the restaurant to get him away from whatever danger may have still been there,’ Dowling says. ‘You would think I had just thwarted an assassination attempt.’

As it turned out, the restaurant was near an apartment complex where the girlfriend of one of the two men lived.

‘The guy had gone to see his girlfriend, and she was there with another guy,’ Dowling said. 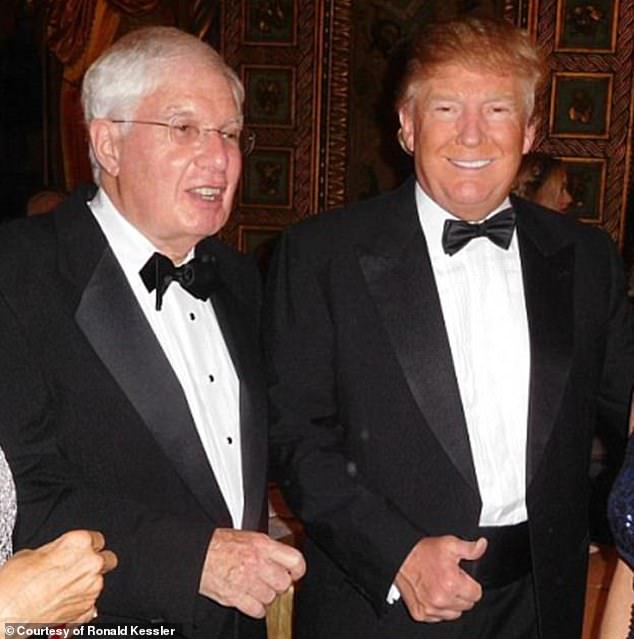 ‘So the boyfriend got very angry. The other guy who was there with his girlfriend pulled out a knife, kind of slashed him, didn’t hurt him badly. So this fellow who had been cut decided that he and another guy were going to go back and kill the guy that night.’

Not knowing the vice president was coming, they parked in the lot at the Chart House and decided to sneak through the woods to get to the apartment complex. They were tried and convicted on illegal weapons and attempted assault charges.

Despite warnings from his detail, Bush would insist on leaving the Oval Office through the door to the Rose Garden and greeting tourists lined up along the fence on Pennsylvania Avenue.

Bush’s detail leader assigned agents to rush to the fence as soon as an alarm notified them that Bush had opened the door to the outside. Soon, the Washington Post ran a story reporting that tourists were delighted at their unexpected encounter with the president.

Just after that, agents spotted what agent Glenn Smith calls a ‘textbook’ possible assassin as Bush was greeting onlookers at the fence.

‘The man had on a coat in the summer, he looked disheveled, and his eyes were darting in all directions,’ Smith recalls. ‘We patted him down, and it turned out he had a nine-millimeter pistol on him and probably intended to use it on the president.’

After that, the detail leader had a talk with Bush. He pointed out to the president that by greeting people spontaneously, he was not only endangering himself but his agents. From then on, ‘Bush would give us time to set up a secure zone at the fence,’ Smith says.

At one point, Bush and his wife Barbara were staying at their Kennebunkport home in the winter, and the president and his wife went out for a walk in the freezing cold.

‘I had a hat on, and two of the other agents had a hat on, but the one agent assigned to the first lady didn’t bring a hat with him,’ says former agent Patrick F. Sullivan, who was on the President’s Protective Detail from 1986 to 1990. ‘So the president came out with Mrs. Bush, and we started to walk.’

‘George, we need to get this agent a hat,’ Barbara Bush—code-named Tranquillity—said.

She walked back in the house, got one of President Bush’s furry hats, and gave it to the agent.

The agent put on the president’s hat