When you look under the hood of Victoria’s economy during the past few decades, it becomes clear that the state’s population boom, particularly in Melbourne, is the engine that has generated growth. It had been projected that by 2056 the state would hit 11.5 million people, an increase of nearly 5 million from today. Melbourne’s rapid expansion has been the justification for the enormous infrastructure projects under way, and has driven growth in the residential building industry and many of the service sectors.

But on Tuesday, for the first time, the federal budget revealed how hard Victoria's extended lockdowns have put the brakes on the state's population growth. Treasury estimates there will be 400,000 fewer people living in Victoria by the end of 2022 than had been expected before the pandemic hit. The state's interstate migration estimates have been downgraded for this year from an expected increase of 16,800 to a negative 1200. The figure is not expected to hit positive numbers again until 2022-23. 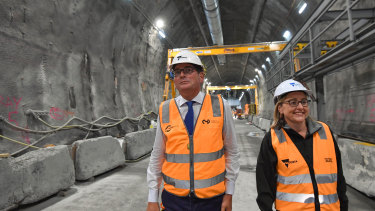 Much of Victoria’s infrastructure spending is to cater for a growing population.Credit:Joe Armao

While this may put a substantial dent in the state's ability to recover from the virus-induced recession, it could also be argued that it will provide some breathing space to allow Victoria to expand its infrastructure without the relentless pressure of a rapidly growing population.

It is not as though Victoria will lose people overall. Rather, the state will not grow as quickly, at least in the short term. Before the pandemic, Victoria's population had been expected to grow by about 150,000 to 160,000 a year for the next three years. Now, Treasury forecasts a rise of 21,000 in 2021 and just over 50,000 the following year.

But by 2023, the state's population is expected to again be growing strongly, by about 100,000 people. All these figures are just forecasts, of course, and how the economy in Victoria and Australia recovers will influence the numbers of people who will be attracted to live here.

In the three years to 2022, Australia's population is forecast to increase by 1.5 per cent. Victoria’s is expected to grow by 130,000 people, or 2 per cent. That is a significant slowdown – we have been growing by about that percentage each year in recent times. But it is not necessarily a bad thing and will at least force the state government not to be so dependent on rising population to prop up revenue.

Population growth is always a vexed and sometimes emotional debate, especially in recent times when the rate of growth has been among the highest in the developed world, especially in Victoria.

But most of the essential characteristics that make the state such an attractive place to live will not be diminished once the pandemic is behind us.

It will be interesting to see how the state government responds to the population slowdown in its own budget due next month. Premier Daniel Andrews has promised a budget this year on a scale of spending and policy reform unprecedented in Victoria's history. The Age supports the ambition with the same caveats applied to the federal budget. The spending must be well targeted to jolt the state out of a deep recession and to create jobs.

Some will argue that slower population growth should be locked in for the long term. Those who fear a "population crisis", such as former business leader Dick Smith, believe that Australia is putting too much pressure on the nation's natural resources. He has predicted in the past that this will lead to “sheer misery” and argued recently that the pandemic "will force us to try and live within our means and not just to have never-ending population growth".

Others argue that, overall, a rising population has benefited Australia in more ways than the economic. Overseas immigration has allowed generations of individuals and families the opportunity to build a better life after suffering persecution or fleeing war-ravaged homes. It has also transformed Melbourne into a much more culturally diverse and tolerant city.

But it's a city that has had plenty of growing pains. Suburbia now stretches well into what was once the regional outskirts. The pandemic will take the pressure off for a couple of years. However, that should not stop us preparing for the day when we welcome people once again to make Victoria their home.