The First Minister made a raft of changes to the country’s hospitality rules as she provided more detail about a new five-tier lockdown due to come into force on Monday.

Pubs in Level 3 which are currently closed by law will be allowed to reopen but not serve alcohol, she told the Scottish Parliament, a move which will help those which also serve food.

Additionally, the curfew in the new Level 1 and 2 areas will be extended from 10pm to 10.30pm.

Pubs in Level 2 will also be allowed to serve alcohol indoors again, but only to people eating a meal, and before 8pm.

Under restrictions currently in place, bars and licensed restaurants in five health board areas – Greater Glasgow and Clyde, Lanarkshire, Ayrshire and Arran, Lothian and Forth Valley – have been forced to close for all but takeaway services.

Pubs, bars, restaurants and cafes elsewhere in Scotland are only allowed to serve indoor customers between 6am and 6pm with a ban on alcohol inside, although alcoholic drinks can be served until 10pm in outdoor areas.

Ms Sturgeon also warned that North and South Lanarkshire –  a vast area between Glasgow and Edinburgh in the central belt,  could be put into the top Level 4 next week.

She told Holyrood ministers wanted to avoid the move unless it was ‘absolutely necessary’, and said a decision would be delayed to the last minute because virus cases were ‘stabilising’ in the area. 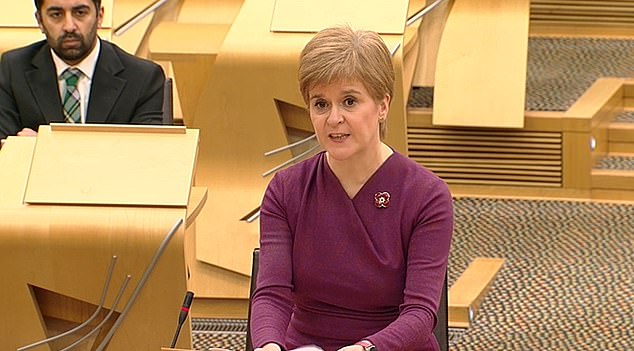 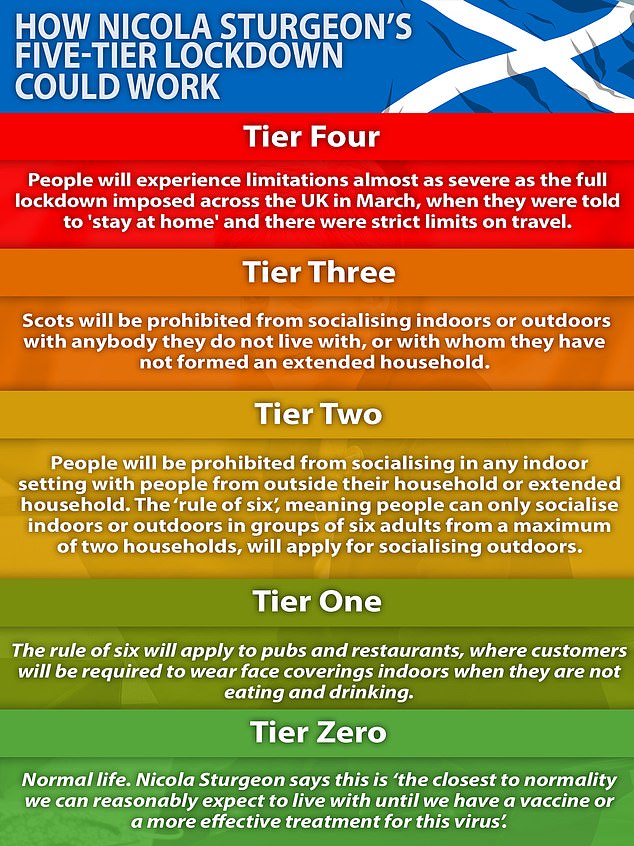 In a debate on the new system, Ms Sturgeon said: ‘As has been reported, we are considering whether the very high rate of transmission and hospital admissions in North and South Lanarkshire may necessitate a move for them to Level 4. These are the only areas currently being considered for Level 4.

‘There have, however, been some encouraging signs in the last few days that the situation in Lanarkshire may have stabilised slightly.

‘We will only take this decision if it is deemed absolutely necessary and I hope we can avoid it.’

On Tuesday, the Scottish Government published an updated draft of guidance on what restrictions would be in place under each of the five tiers applied to local authorities.

In Level 4, both indoor and outdoor hospitality businesses would close – including cafes, restaurants, pubs and bars.

However, takeaways for food and alcohol will be permitted.

The guidance also recommends against non-essential travel in or out of Level 4 areas and says there could be ‘limits on travel distance, or a requirement to stay at home’.

Non-essential retail would also close in Level 4 areas, with the exception of clock and collect and outdoor retail.