‘She was not hanging around!’: Supermum Sue Radford reveals her 21st child was born after just a 12-minute labour as Britain’s biggest family share their Christmas plans

Britain’s biggest family have welcomed their 21st child after a lightning-quick labour – but the Radfords have claimed they are ‘definitely not’ having another.

Sue and Noel Radford announced the birth of Bonnie Raye Radford to social media fans after she was born on November 7 but revealed on television today the labour was only 12-minutes long.

Bonnie Raye was born at the Royal Lancaster Infirmary where midwives had previously delivered 14 of the family’s children.

The littlest Radford – now thirty years younger than the eldest Christopher – made her first television appearance on This Morning, on Friday, alongside her now nationally famous family.

‘Super mum’ Mrs Radford from Morecombe in Lancashire said her youngest made a speedy entrance.

She said: ‘She was very quick she was not hanging around – I think they’ve got my labour down to about 12 minutes.

‘I think we just love having a big family. Welcoming a new born into our life. If it’s an addiction we’re giving it up.

‘We’ll always have lots of grandchildren.’

Mrs Radford last gave birth in September 2017 and she promised at the time that it would be her last.

Doubtful daughter Sophie, who has three children of her own, gave her mother ‘until April’ to be pregnant again. 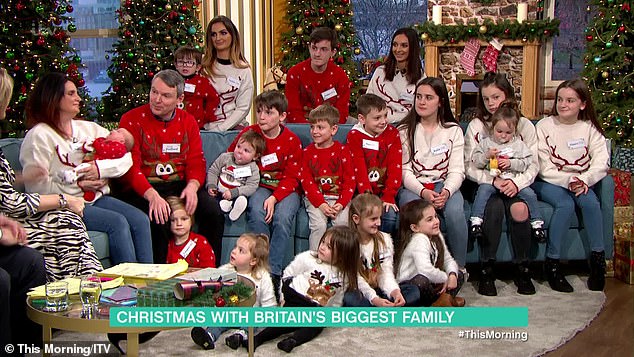 The Radfords are preparing for Christmas when there will be around 30 people enjoying the day in their home, including grandchildren

A whole lot of mouths to feed! The Radford family’s budget

The couple receive £170 per week in Child Benefit and survive on Noel’s just under £50,000 salary.

They spend around £300 a week on food shopping and carefully plan their batch-cook to make sure it feeds everyone.

They have a budget of £100 for their children’s presents at birthdays, while at Christmas they set aside between £100 to £250.

However, she announced in a YouTube video from May that she was pregnant again.

Mrs Radford has now spent a total of 811 weeks pregnant and insists that she is now ready to just enjoy her children and grandchildren.

They had their first child, Chris, 28 years ago, when Sue was aged only 14. The couple decided to keep the baby as they were both given up for adoption at birth.

They became grandparents when their daughter Sophie gave birth and she has gone on to have three children.

The family now live in a large £240,000 Victorian house, a former care home, that they bought 11 years ago and they pride themselves on having no credit cards or finance agreements and do not claim benefits but are awarded child benefit. They also enjoy a holiday abroad every year.

They spend £300 a week on food shopping, with 18 pints of milk, three litres of juice and three boxes of cereal being consumed every day. 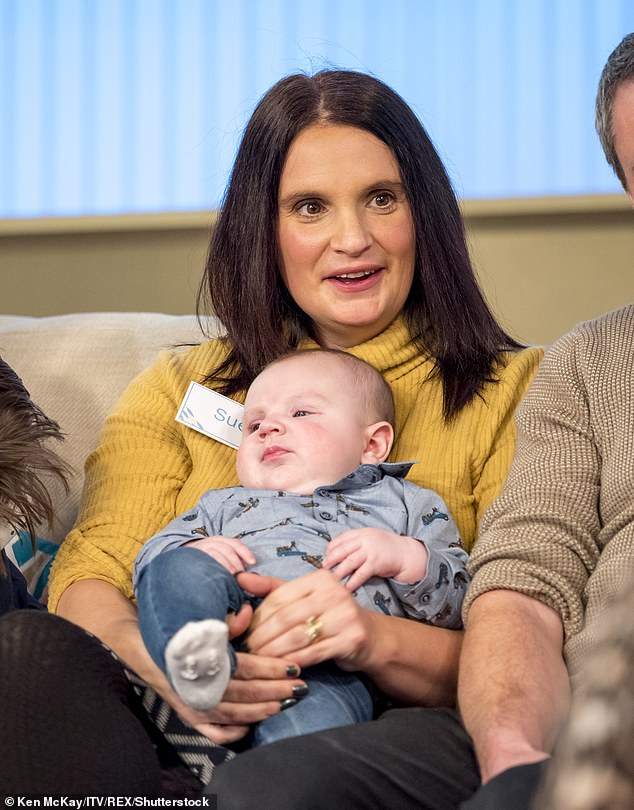 When it comes to celebrating their children’s birthdays they have a budget of £100 for presents, while at Christmas they set aside between £100 to £250.

But Mrs Radford, called ‘supermum’ said she is planning now on enjoying her grandchildren.

She added: ‘The sleepless nights are taking their toll.’

This Christmas up to 30 people will be around the table at their home in Lancashire.

‘That’s down to me. We prep the night before. We’ve got a table we can get 16 round and another in the table another 6. Some double up. Sue does help but it’s mainly me.’

The children told presenters on This Morning they help around the house and enjoy having many siblings because ‘silence wouldn’t feel right’.

A DAY IN THE LIFE OF THE RADFORDS: HOW BRITAIN’S BIGGEST FAMILY SPENDS A TYPICAL DAY

After an early start in the bakery, Mr Radford returns home every day at 7.45am to sort out the children and get them to nursery at school.

All their uniforms are washed and laid out the night before, while breakfast is staggered into two shifts.

Six of the children are at the same primary school ten minutes away and five are at secondary school. Noel drives them in a minibus which, as it carries more than nine passengers, is entitled to use bus lanes.

Meanwhile, the three youngest, Oscar, Caspar and Hallie, remain at home with Sue, though Oscar goes to nursery in the afternoons.

The family do nine loads of washing a day, get through 30 bottles of washing liquid every month and use four toilet rolls a day.

Incredibly they manage to feed the family on £300 a week, feeding them all pasta or a large stew using deals with their local butcher and greengrocer.

Bathtime at home begins around 6pm and while the younger ones will be bathed and in bed by about 7pm, the older ones stay up until 9pm.

Mr and Mrs Radford say they are in bed by 10pm.